What are the features and benefits of the fixed exchange rate regime?

Under a fixed exchange rate regime, can the central bank still pursue an autonomous monetary policy?

What happens if the central bank is unable to guarantee exchange rate parity?

Situations in which a country's exchange rate fluctuates little or not at all (administered fluctuations) against a base foreign currency = the government intervenes continuously to try to maintain parity → continuous interventions. 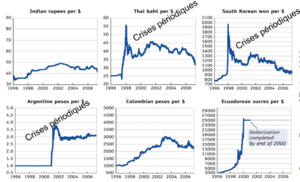 Many developing countries peg their currencies to a "strong" currency (dollar or CFA franc), see the following table.

Since 1973: international monetary system is hybrid = floating exchange rate regime administered in many countries (> that the 3⁄4 of countries), cf. following table. 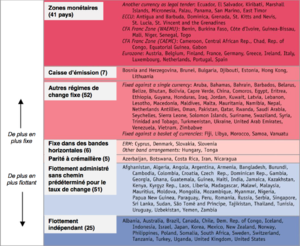 Advantageous for least developed countries where the financial system is not sufficiently developed to hedge against exchange rate risk in the long term.

For countries with weak institutions, and a monetary policy with little credibility (hyper inflation), it allows "importing" the credibility of a stronger central bank.

We will see in this chapter that all this choice depends on the cost of losing the autonomy of monetary policy.

Operation based on the principle of double writing

↗ ⇒ on the money market:

↗ ⇒ on the foreign exchange market: ES of currencies, so

How do we prevent E

? Purchase of currency by the CB ⇒

↘ until the interest rate returns to its initial level.

Consequence: intervention on the foreign exchange market leads to a ↗ of

The loss of control of the CB's monetary policy in fixed exchange rates is also known as Mundell's "trilemma" (or "impossible trilemma").

Clearly the three objectives cannot coexist and one of them must be sacrificed to achieve the other two.

NB I: In the following we will make the hypothesis that the fixed exchange rate regime is credible ⇒ 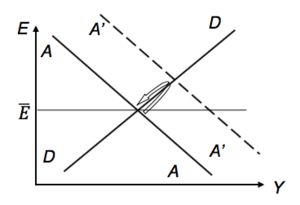 In the IS-LM model, the displacement of the LM curve is to the right (

↗ initial) and return of LM to its initial position ( 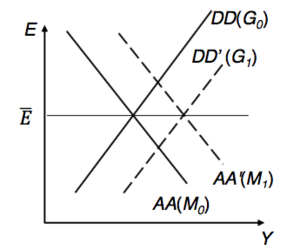 In the IS-LM model, the shift is made to the right of the IS curve (

constant (no crowding out!).

NB I: In the following we will assume that the fixed exchange rate regime remains credible ⇒

Hypothesis: we start from a long term equilibrium (

NB III: in the long term no effect on either

, but real appreciation (as in floating exchange rates). 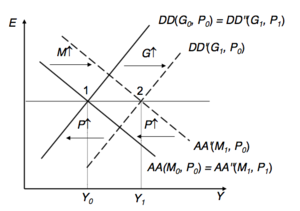 Under a fixed exchange rate regime, the CB loses control of monetary policy, but in reality it has another instrument of intervention in the economic system, which consists of changing the exchange rate itself: devaluation or revaluation of the national currency.

At least in the short term, a devaluation of the national currency is in principle an economic policy instrument to revive the economy and intervene on

On the other hand, under a fixed exchange rate regime, the CB can be confronted with situations of speculative attacks if the markets lose confidence in its ability to defend parity: self-fulfilling crises and forced devaluations. 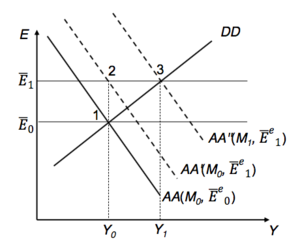 ↗ immediately to its new value (point

↗ ⇒ DD and AA move left (not shown) to intersection at point

to its long term value.

Lack of confidence in CB's ability to defend parity. Hypothesis: 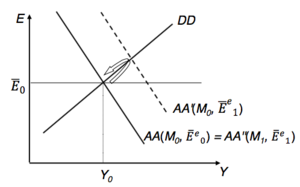 ↘ ⇒ back to the initial point with a rise of

But: in the meantime, the

have decreased! ⇒ This reinforces the devaluation expectations:

... until the forced devaluation (self-fulfilling crisis).