David Ricardo developed the classical theory of comparative advantage in 1817 to explain why countries engage in international trade even when one country's workers are more efficient at producing every single good than workers in other countries. He demonstrated that if two countries capable of producing two commodities engage in the free market, then each country will increase its overall consumption by exporting the good for which it has a comparative advantage while importing the other good, provided that there exist differences in labor productivity between both countries.[10][11] Widely regarded as one of the most powerful[12] yet counter-intuitive[13] insights in economics, Ricardo's theory implies that comparative advantage rather than absolute advantage is responsible for much of international trade.[14]

Number of units produced per unit of work

In an economic model, agents have a comparative advantage over others in producing a particular good if they can produce that good at a lower relative opportunity cost or autarky price, i.e. at a lower relative marginal cost prior to trade.[16] Comparative advantage describes the economic reality of the work gains from trade for individuals, firms, or nations, which arise from differences in their factor endowments or technological progress.[17] (One should not compare the monetary costs of production or even the resource costs (labor needed per unit of output) of production. Instead, one must compare the opportunity costs of producing goods across countries[18]).[19]

On Valentine's Day the demand for flowers in the United States is 10 million.

Producing flowers in February in the United States is expensive.

Flower production has an opportunity cost in terms of computers (or some other good).

Suppose that in the United States 10 million flowers can be produced with the same resources as 100,000 computers.

Suppose that in South America 10 million flowers can be produced with 30,000 computers.

The 10 million flowers have a lower opportunity cost in South America => specialization in flower production.

Trade gains and comparative advantage: If instead of producing the 10 million flowers they need in the USA, they specialise in computer production and South America specialises in flower production, and they trade, then the "world" will have 70,000 more computers at its disposal.

Not all individuals (countries) have an absolute advantage...

Example: Tony Parker plays basketball better than his gardener. He also cuts the grass faster. Parker therefore has two absolute advantages over his gardener and his gardener has none. However, it is reasonable for Parker to have a gardener. Why does he need a gardener? Because Parker's opportunity cost for the gardening business is much greater than that of his gardener who doesn't play in the NBA.

Labour is the only factor of production

His offer is fixed (perfectly inelastic).

Perfect competition on all markets (goods and labour)

The Production Possibilities Frontier (PPF) gives us the maximum amount of wine that can be produced given the amount of cheese produced. 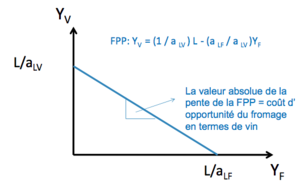 The frontier of production possibilities: Corresponds to figure 3.1 on page 34 of KOM (2012).

Balance of production in the closed economy[modifier | modifier le wikicode]

If perfect competition => no profit:

Perfect mobility of work between the two sectors therefore:

then no wine production

then no cheese production 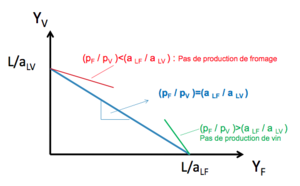 In a closed economy both goods are produced (because quantities produced = quantities consumed) and as perfect mobility of labour between the two sectors, in balance:

The quantities consumed/produced of each good are determined by the relative demand for the two goods at the relative price set by the unit labour coefficients. 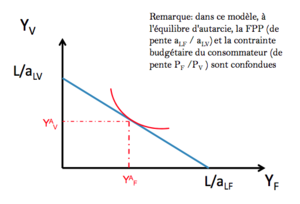 The autarky balance: The autarky quantities consumed are determined by the relative demand conditions.

Labour is the only factor of production

His offer is fixed (perfectly inelastic).

Perfect competition in all markets: goods and labour

We export the good in which we have a comparative advantage and import the other good.

In free trade balance, we have (complete?) specialization of Home in Cheese and Foreign in Wine.

The equilibrium price is determined by the intersection of relative demand and supply. 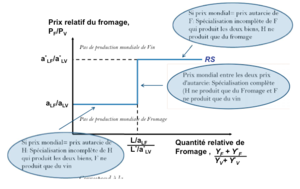 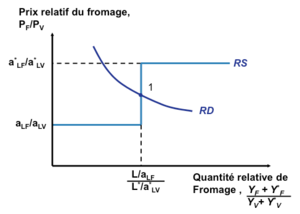 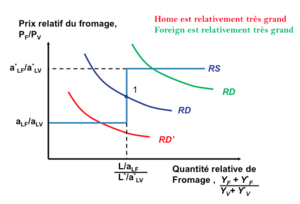 and the consumer's budget constraint (of slope

are no longer necessarily confused!

In the presence of trade, the prices of goods are identical in both countries (otherwise arbitration).

Thus, absolute productivity differences between countries mean that wages are not necessarily equal.

But as long as the relative price of free trade is between the two prices of autarky, (real) wages rise in both countries when trade is opened up.

Despite higher absolute productivity in the United States than in England at the end of World War II, exports from both countries were in line with the prediction of Ricardo's model (McDougall, EJ 1951). 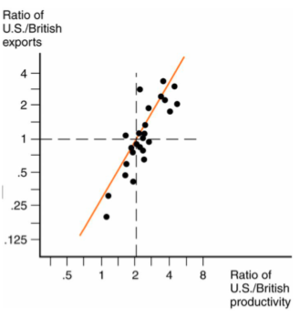 « Openness to free trade can only benefit an economy if it is sufficiently efficient or competitive. »

Wrong: What determines gains in trade is not the absolute advantage, but the relative advantage.

and so Home wins by specializing in cheese production, even though it is 10 times less productive than Foreign.

Wages reflect differences in absolute productivity between countries. And gains from trade are independent of absolute benefits. 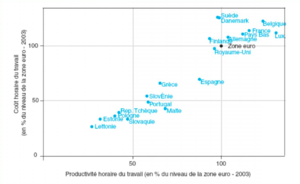 « International trade allows companies and consumers in developed countries to exploit workers in the Third World by keeping wages low. »

Wrong: Trade increases workers' wages by allowing them to specialize where they are relatively more productive. When the price of the exportable good increases (Cheese), this leads to an increase in real wages.
The solution is not to stop trade, but to allow them to increase their productivity (education, institutions, respect for the law, etc.).

The Ricardian model is the simplest model to explain how differences between countries can lead to trade gains.

Labour is the only factor of production and gains from trade are explained by differences in relative productivity between countries.

Gains to trade can be seen as :

The basic prediction of the Ricardian model that a country exports more of the good in which it has higher relative productivity (regardless of its absolute productivity) has been confirmed by a large number of studies.