Aller au contenu
The Heckscher-Ohlin model: differences in factor endowments as a determinant of trade

Comparative advantages will not be determined by differences in productivity, but by:

The FPP will be concave (and not linear as in the Ricardian case). Why is that? Because we have two substitutable factors of production (and not 1) with decreasing marginal productivity. To see this take the extreme case where capital is fixed in both sectors. By reallocating labour to one sector you decrease its marginal productivity in the sector that increases employment and you increase the marginal productivity of labour in the sector that sees employment decrease. It therefore becomes increasingly costly in terms of opportunity cost to produce one more unit of the good whose output you have just increased. 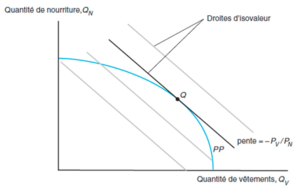 The concavity of the PPF implies that there will rarely be full specialization in the HO model;

The economy produces at the point that maximizes the value of output, for the prices given to it;

The point of tangency between the PPF and the highest possible isovalue line...

Opportunity cost of clothing in terms of food is equal to the relative price of clothing.

In autarky: point Q = basket of production and consumption in equilibrium

FPP: Frontiers of Production Possibilities, the set of baskets of goods that the economy can produce using all its resources. Isovalue right: set of baskets of production corresponding, for a given price of goods, to a constant total value (

Output of the economy for a given relative price: point 1

Consumption of the economy: on CB which passes through point 1 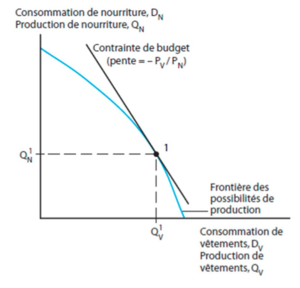 In a free trade situation the quantities imported and exported are provided by the confrontation of the budget constraints and consumption choices of the two countries. 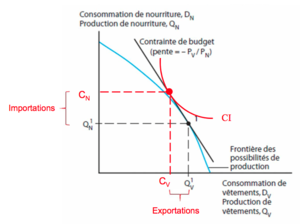 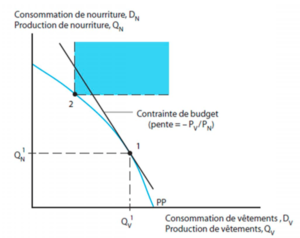 In autarky: consumption basket in 2

Openness to trade: relative price of clothing rises, new production point in 1 and consumption basket somewhere in the new BC

Part of this line (the one in the coloured part) represents baskets that can be reached in free trade with a simultaneous consumption of both goods higher than in autarky.

Trade thus makes it possible to broaden the possibilities of consumption. 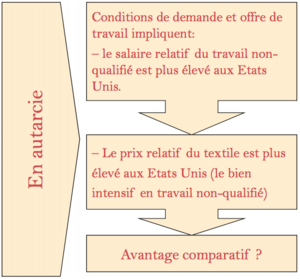 The ratio of skilled to unskilled workers is higher in the United States.

Whatever the relative price of the factors (skilled versus unskilled wages), textiles always use relatively more unskilled workers than in software.

An economy has a comparative advantage in the production of the good that uses relatively intensively the factor of production with which it is relatively well endowed. 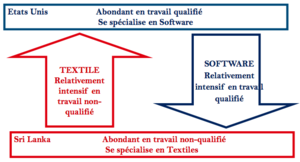 Not all unskilled workers are the same. US workers are more efficient than workers from the South. They have higher productivity. So finally the United States has an effective hourly labour input that is not so small. Adding differences in productivity (Ricardo) to an HO model explains a large part of world trade.

The predictions work better for North-South trade (exploiting differences) than for North-North trade (based on exploiting similarities and economies of scale). For example, China clearly exports low-skilled labour-intensive goods (clothing) to the North and imports mainly machinery and chemicals.

Preferences in the North that are heavily biased towards the consumption of more capital-intensive goods (differences in preferences as a determinant of trade).

No free trade at that time + end of WWII 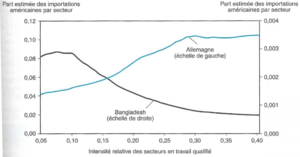 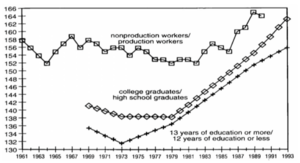 Evolution of skilled versus unskilled wages in the United States.

« If wages do not adjust, then unemployment rises as competition with imports from developing countries increases (globalisation of the last 20 years, etc.).) » 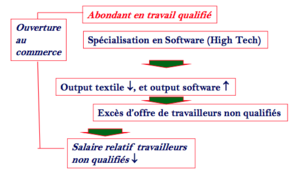 Can commerce explain this? Yes, they can![modifier | modifier le wikicode] 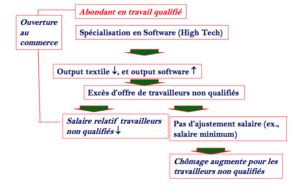 Stolper-Samuelson effect: Holders of the factor intensively used in the production of the good whose relative price rises see their real remuneration increase. Individuals who hold the other factor of production see their real income decrease.

With free trade there is a tendency to observe what is called factor price equalisation.

Problem: Although trade liberalisation is well advanced in many countries, significant differences in factor prices persist.

Factor price equalisation is mitigated by :

Although factor price equalisation is not observed, many observers attribute the rise in inequality between skilled and unskilled workers in the OECD to the growth in international trade and in particular the development of North-South trade.

1. Most empirical studies show a very small impact of trade on the decline in the relative wages of unskilled workers in the OECD.

2. Problem with Stolper Samuelson's prediction in PvD. With trade, the relative wages of the unskilled are expected to rise when in reality they often fall. No evidence of a reduction in inequality ...

Can commerce explain this? Not so fast...[modifier | modifier le wikicode] 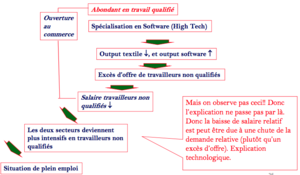 Corresponds more to the expected effect of technical progress than to the expansion of North-South trade. 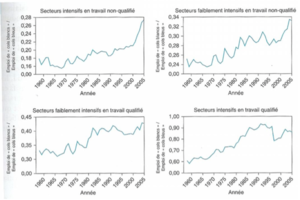 Attention: this does not mean that international trade has nothing to do with it! 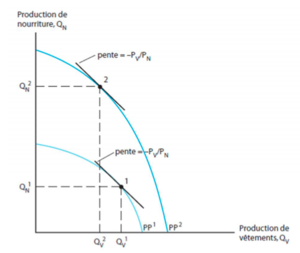 But why do relative prices of goods not change when the supply of a factor of production changes?

Because the prices of goods are fixed on international markets.

"Mariel Boatlift": 125,000 Cuban refugees arrived in Miami between May and September 1980, representing a 20% increase in the Cuban population in Miami and 7% of the city's population.

It was expected that the wages of the workers, especially low-skilled workers (the migrants themselves being less qualified than the workers already settled in Miami), would fall.

In fact, the wages of low-skilled workers in Miami followed the national trend over the period and reoriented production

Note: if the economy is closed, immigration causes wages to fall and industries all become more labour-intensive... see slide 26. If open economy, prices of goods and therefore prices of given factors, quantity adjustment... 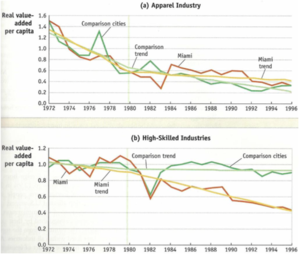 An economy with a relatively large amount of arable land relative to its labour endowment will gain more from producing food than one with a low land/labour ratio.

As a general rule: an economy will be relatively efficient in producing goods that make relatively intensive use of the factors of production with which it is relatively well endowed. 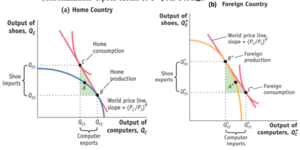