Aller au contenu
Economies of scale as a determinant of trade: beyond comparative advantage

The idea is that the internal market of small countries is not sufficient to allow them to develop economies of scale. Trade with the rest of the world gives access to a larger market.

But if we have, for example, increasing internal returns to scale:

When economies of scale are present, the production of a good increases more than proportionally to the quantity of factors employed in that sector.

Internal economies of scale: where the unit cost of production depends on the size of each firm but not necessarily on the size of the sector. (e.g. fixed cost of a machine).

There are different implications for market structures.

One product, but a large number of varieties

Firms face internal economies of scale, but competition is monopolistic: firms continue to enter the market until profits are zero.

Heterogeneous consumers and each consumer has a preferred variety.

Internal economies of scale are assumed 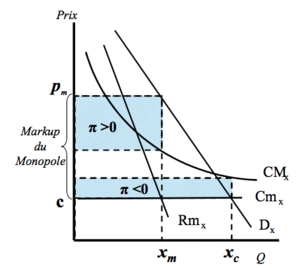 Another possibility: free entry until D is tangent to CM (i.e. until px=CMx) n1 firms and always px>Cmx 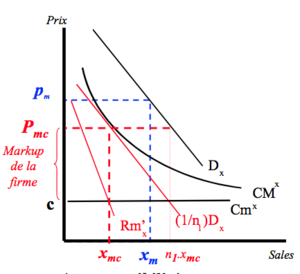 Monopolistic competition models are based on two central assumptions :

Relationship between price (markup) and number of firms?

in autarky with at equilibrium (

varieties) and a price Merger of 2 identical markets of 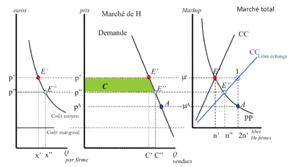 Gain in economies of scale (or rationalization or selection)

Firms disappear when trade is opened up. In this model, as all firms are identical, only chance determines which firms win.

Model with heterogeneous firms: not all firms have the same productivity

This type of model also explains why less than 20% of French and American manufacturing companies export, and an even smaller percentage invest abroad.

A large part of the trade of OECD countries is intra-industrial (e.g. 40% for the EU). The trade model with economies of scale helps to explain this.

Evolution of the weight of intra-industry trade in world trade. (Source: Marius Brülhart, 2009).

Effect of integration within NAFTA between the US, Canada and Mexico, cf. section 3 chapter 6 in FT (2012) .

We're getting the effects we expected...

Effect of trade integration within the EU-15 (continued)

Allen et al (1999): The implementation of the Single Market reduced price-cost margins by about 4% on average.

= fewer firms, each of larger size and theoretically more efficient 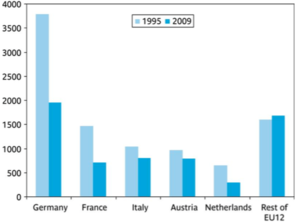 According to Marshall, there are 3 main reasons for corporate concentrations (i.e. 3 types of externalities):

Each sector will have a decreasing supply curve: the greater its production, the lower the price at which it is prepared to sell. 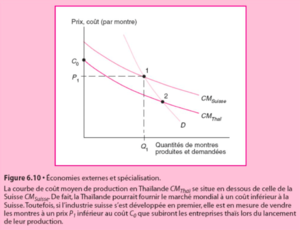 Historical accidents can have important consequences on the comparative advantage of countries in the presence of external economies of scale,

The presence of external economies of scale may justify ad hoc interventions over time. 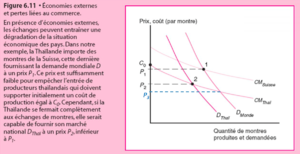 More importantly. Once it produces at

the Thai economy can now satisfy the world economy at a

Trade restrictions become a means of promoting exports in these models. With gains to trade at the world level (with Swiss producers suffering losses).

This justification for temporary protection of an industry is known as the infant industry argument.

Krugman (Nobel 2008) explains the processes of spatial agglomeration of the economy and the resulting economic exchanges.

If firms benefit from internal returns to scale and there are transport costs :

In fact, not all activities with increasing returns are systematically concentrated in a single location because there are forces of dispersion (constraints on worker mobility, congestion effect on immobile factors, intensity of competition).

Krugman (1991): Starting from a situation where industrial sectors with increasing returns to scale are evenly distributed across regions/countries, the lowering of barriers to international trade increases the likelihood of a cumulative process of agglomeration. 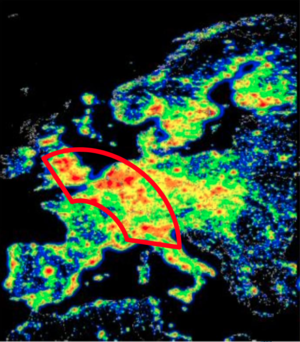 Countries/regions in the centre of Europe attract and specialise (1/7 of the surface area but 1⁄2 of the activity) + peripheral countries/regions less likely to develop dynamic industrial clusters.

Ambitious regional policy Necessary to counterbalance the mechanisms of agglomeration.