Before studying the impact of trade policy on welfare, we recall some analytical tools:

When the price of the good increases, the demand expressed by domestic consumers decreases, while the quantities offered by producers increase. This leads to a decrease in import demand.

When the price of the good rises, foreign production increases, while foreign demand falls. This leads to an increase in the quantities of products available for export. 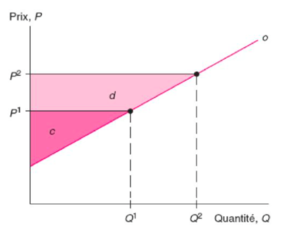 For the small country that cannot influence international prices, it is sufficient to keep world prices at

following the introduction of the tariff (i.e. the surface area (

disappears). The fare can never increase well-being - no optimal fare) 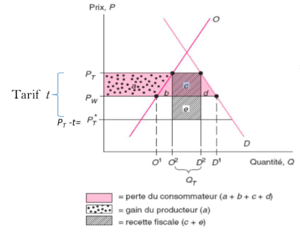 There is a welfare gain if

(due to improved terms of trade). There is an optimal tariff.

The impact of a tariff can always be reproduced by introducing a consumption tax and a subsidy to producers identical to the tariff.

This implies that if the objective of the tariff is to:

So, all these finance ministers have never taken an international trade course? They certainly have, and the explanation is often on the political process side in determining the instruments to be used in each case.

For the CAP, a subsidy is always politically more expensive than a tariff (which actually generates revenue for the government).

In Sub-Saharan Africa, it is very difficult to collect revenue domestically (administration capacity is very low), and the cost of collecting revenue is much lower in customs (smuggling becomes a problem!).

This could also explain the case of Egypt, but production should then be banned. Producer interests are probably an important part of the explanation.

following the introduction of the subsidy (i.e. 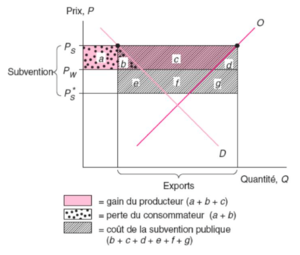 Subsidy = public aid to companies that sell part of their production abroad.

There is always a welfare loss (no optimal export subsidy). 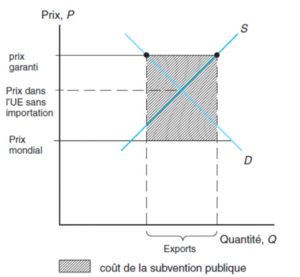 At the end of 1985, stock so huge that an export subsidy (in addition to taxes) was introduced,

Reduction of the world price, Increases the necessary amount of subsidy,

The new rules are expensive for European consumers and taxpayers (in 2007, advertising subsidy = 36% of the value of the agricultural production) + for non-European countries exporting these products, Reforms with "decoupling" of agricultural subsidies 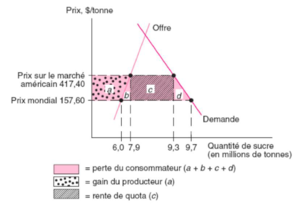 If binding: systematically increase the domestic price in the sector protected by the quota

Example of the impact of a quota on trade: China and the Multifibre Arrangement[modifier | modifier le wikicode]

Changes in Clothing and Textiles Exports to the United States after the MFA, 2004–2005. 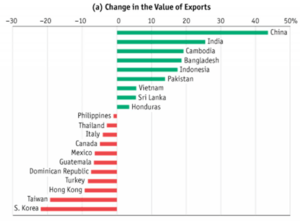 After the expiration of the Multifibre Arrangement (MFA), the value of clothing and textiles exports from China rose dramatically, as shown in panel (a). This reflects the surge in the quantity of exports that were formerly constrained under the MFA as well as a shift to Chinese exports from other, higher- cost producers such as Hong Kong, Taiwan, and South Korea. 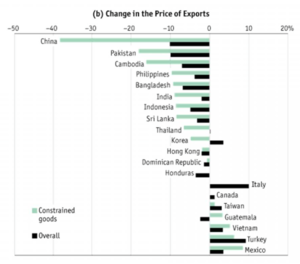 In panel (b), we see that the prices of goods constrained by the MFA typically fell by more than the average change in export prices after the MFA’s expiry. This is exactly what our theory of quotas predicts: the removal of quotas lowers import prices for consumers.

But the equivalency holds if the rents associated with the quota are captured by the government. This will happen if, for example, the government sells the import rights at auction.

But it is common to give them to domestic importers. So there is no change in aggregate welfare, but different distributional effects.

They are sometimes given to exporters abroad (e.g. VERs). In this case the rents are captured by foreigners and the cost of the quota to the domestic economy becomes much greater than the cost of the equivalent tariff.

More importantly, a quota and a tariff will not be equivalent if there is imperfect competition.

Take the example of a domestic monopoly: trade forces it to behave competitively (the pro-competitive effect of trade or "import discipline hypothesis"). A tariff will have a similar effect, because it sets the price at which it must sell at the world price plus the tariff (its marginal income is a horizontal line). But in the case of the quota, the quantities imported are fixed and there is no threat that they will increase if the monopolist increases the price. So he can continue to abuse his monopoly power over residual demand (once the import quota is deducted). So the price paid by consumers will be much higher than in the case of the "equivalent" tariff. 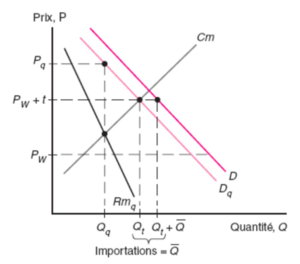 The VER (RVE in French: Restrictions Volontaires aux Exportations). They appear to avoid the prohibition of the GATT Tokyo Round of negotiations (1979) which prohibits the use of quantitative barriers by importing countries. The result is a transfer of rents abroad, plus an improvement in the quality of the exporting country's products.

Prices of American Small Cars Under the VER on Japanese car imports : The average price of U.S. cars rose very rapidly when the quota was first imposed: from $4,200 in 1979 to $6,000 in 1981, or a 43% increase over two years. Only a very small part of that increase was explained by quality improvements, and in the later years of the quota, U.S. quality did not rise by as much as it did in the Japanese imports. 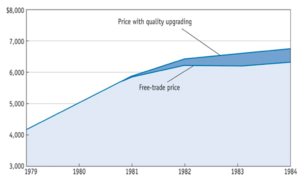 Prices of Japanese Car Imports Under the “voluntary” export restraint (VER) on Japanese car imports, the average price rose from $5,150 to $8,050 between 1980 and 1985. Of that $2,900 increase, $1,100 was the result of quota rent increases earned by Japanese producers. Another $1,650 was the result of quality improvements in the Japanese cars, which became heavier and wider, with improved horsepower, transmissions, and so on. The remaining $150 is the amount that import prices would have risen under free trade. 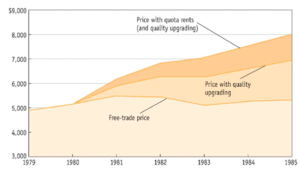 The VER (RVE in French: Restrictions Volontaires aux Exportations). They appear to avoid the prohibition of the GATT Tokyo Round of negotiations (1979) which prohibits the use of quantitative barriers by importing countries. The result is a transfer of rents abroad, plus an improvement in the quality of the exporting country's products. 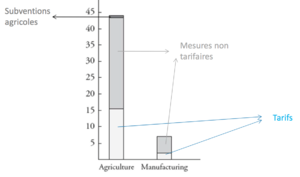 The tariff makes it possible to reach the social optimum of production at point B, but it introduces a consumer loss. A production subsidy would have made it possible to wait for B, and the gain in positive externality for the other producers without introducing the consumer loss. The subsidy is the optimal policy, and the tariff is only a "second best" (second best policy).

But subsidies are politically and administratively costly