What are the determinants of the exchange rate in the short term (i.e. when the general price level remains constant but the level of economic activity fluctuates)?

Under what conditions does a real depreciation lead to an improvement in the trade balance?

What are the combinations of output levels and exchange rates that simultaneously guarantee equilibrium in the foreign exchange market, the currency market and the market for goods and services?

) → equilibrium on the goods and services market (G&S).

(deviations from the level of full employment production are possible)

Until now we have kept the Gross Domestic Product (GDP) constant (or exogenous, i.e. determined outside our models). In the long term (

of full employment), this is justified by the fact that the level of economic activity is determined by the fundamentals of the economic system (capital endowments, labour, land and technology) and not by monetary variables, and that prices adjust perfectly and instantaneously.

In the short term it is possible that changes in the money market or in the exchange rate may affect the level of economic activity, when prices are assumed to be rigid and do not adjust immediately to shocks that the economy may experience (labour contracts and other "menu costs").

SD-PAA approach To study the relationship between exchange rates and GDP in the short term, we combine the monetary model of the exchange rate (to introduce the role of expectations) and the short-term model of the goods and services market with rigid prices.

System of 3 equations with 3 unknowns (

Article détaillé : The Keynesian approach and the IS-LM model.

An alternative approach to study the relationship between

IS-LM approach (FT and all other manuals)

↓) and the higher the math, the more people are going to want to save (=>

As we shall see, the conclusions reached in terms of the consequences for the macroeconomic balance following either a monetary or a fiscal shock are qualitatively identical to those obtained in the DD-AA model. The main advantage of the DD-AA model compared to the IS-LM model extended to the open economy is that it is better suited to analysing the long-term effects since the IS-LM model is a model based on the assumption of fixed prices.

Definition: The AA curve is the set of pairs (

) that simultaneously ensure equilibrium on the foreign exchange market (

satisfied) and on the money market.

Derivation of the AA curve 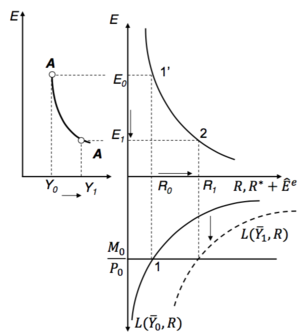 All points above (below) AA correspond to a currency ES (ED). 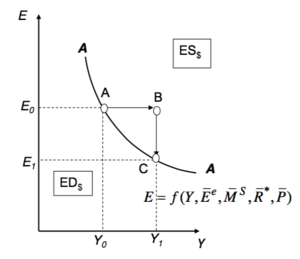 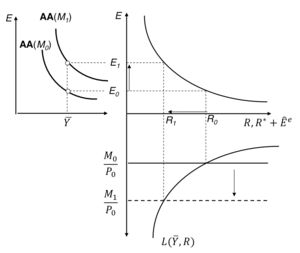 NB: One could also have reasoned at constant

); dn this case, to reabsorb the money ES at constant

, it is necessary that

Any factor causing a currency ED (

↗) causes AA to move to the right. 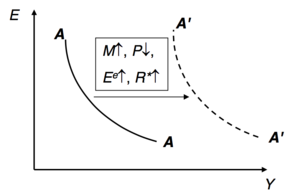 ↓) moves the AA curve to the left.

is positively dependent on disposable income (

is, the higher the

is, the higher the relative price of foreign products, which improves

It can be shown that, following a real depreciation, the current account balance will improve if the following condition is satisfied :

↑) causes an improvement in CA.

Empirical evidence shows that the initial effect of a depreciation on the current account is negative = the depreciation initially causes a deficit.

Explanation: the quantities imported and exported by enterprises and households are fixed in contracts, which will only be gradually renegotiated = initially only the price effect is active (the value of IMP ↑ while the value of EXP does not change), the quantity effect only appears later = initial negative effect on the balance of turnover. 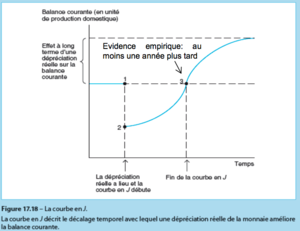 Our hyp. for the rest: 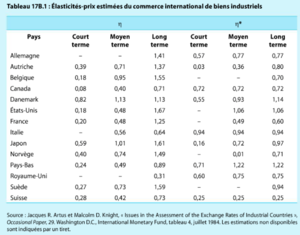 Definition: the DD curve is the set of couples (

) which ensure the equilibrium on the B&S market.

= the overall demand is positively dependent on

(but the induced increase of

is smaller than the increase of 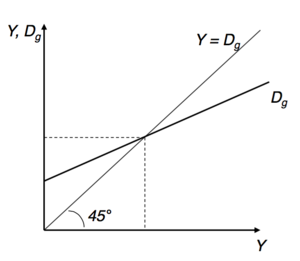 Derivation of the DD curve

Principe: we start from a situation of equilibrium, we consider a ↗ of

↗ to bring the goods market back into equilibrium) and the equilibrium combinations, (

), are plotted in the bottom diagram.

=> DD has a positive slope. 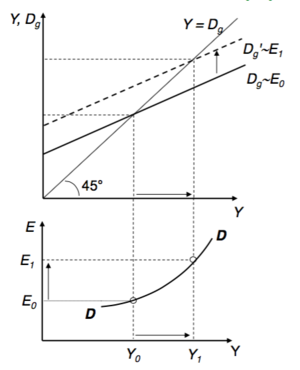 => DD has a positive slope. 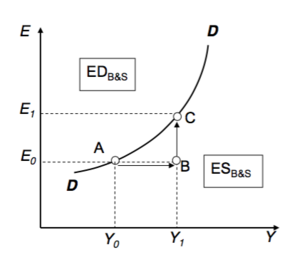 By reasoning at constant

NB: one could also have reasoned at constant

↑ => to restore balance by playing 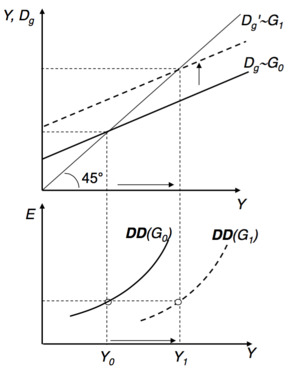 Any factor causing a G&S ED (

↘) causes DD to move to the right. 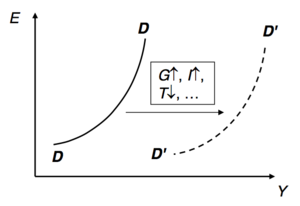 The condition [3'] determines the long term equilibrium level of

has been replaced by its full employment level (

) => the condition [3'] determines the long term equilibrium level of 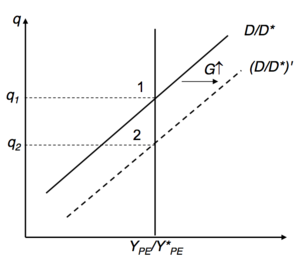 Reminder: it is this value of

is involved in the expectations of

NB: the relative demand function for domestic products becomes decreasing if it is defined as

The equilibrium values of

are those that simultaneously satisfy the equilibrium on the asset market (AA curve) and on the G&S market (DD curve). 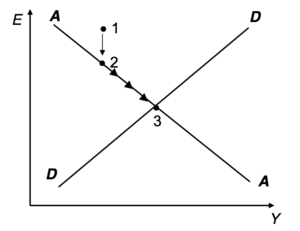 Adjustment is faster in the asset market. E.g. point

=> it is the foreign exchange market that adjusts the fastest (

: equilibrium restored in the asset market but

(endogenous variables): the above DD-AA diagram is a kind of "reduced form model" of a "structural model". 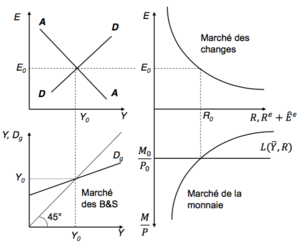 In the full model, expectations of

) are determined by the following expression :

In the following chapters, we will use the full model to analyze monetary and fiscal policies under floating and fixed exchange rate regimes.

Curve IS (balance in the G&S market):

is checked in balance: 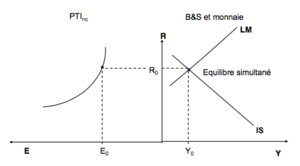