Limitation of the argument :

The tariff makes it possible to reach the social optimum of production at point B, but it introduces a consumer loss. A production subsidy would have allowed to wait for B, and the gain of positive externality for the other producers without introducing a consumer loss. The subsidy is the optimal policy, and the tariff is only a "second best" (second-best policy).

But subsidies are politically and administratively costly.

The argument of external economies of scale[modifier | modifier le wikicode]

a PvD with a potential advantage in a manufacturing sector may not be able to compete with older, better-established industries countries, from developed countries

Historically, most developed countries began their industrialization without customs barriers.

This argument is all the more relevant if there are market failures (imperfection of the financial system, appropriateness problem).

Otherwise, trade protection will not improve the competitiveness of the industry.

A government can intervene to change the rules of the game and transfer part of the annuities held by foreign companies to domestic companies (e.g. subsidy).

Globalization in the face of social challenges[modifier | modifier le wikicode]

Example of maquiladoras = factories located in Mexico close to the US border following the signing of NAFTA - K&O 2009, pages 282-284

Problem: if wages are low, refers to differences in productivity and if working conditions are poor, is this a deterioration?

Consumers are willing to pay more if they know that the good has been produced in decent conditions / Certification system, e.g. Max Havelaar

Alternative: Explicit inclusion of social clauses in international trade agreements (especially since there is a fear of social dumping)?

Opposition from the developing countries who see this inclusion as a protective instrument for developed countries.[10]

Any economic activity, whether production or consumption, is often a source of pollution. 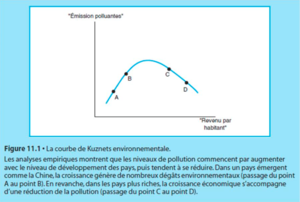 China is catching up with the US and the EU .... 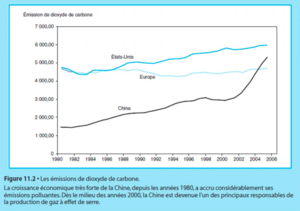 Transport costs (multiplied by the verticalization of trade)

Geographic redistribution of the global industry 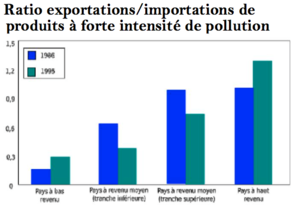 In 1995, this trend became more pronounced: far from environmental dumping, there was a greater concentration of polluting production intended for export in the richest countries.

Conclusions confirmed by other researchers such as Frankel and Rose (2003) or Antweiler, Copeland and Taylor (2001).

However, for some groups of countries and some particular sectors, it can be observed that richer nations tend to import more and export less pollution-intensive goods (see survey in Frankel 2009).

but the phenomenon remains limited and differences in environmental standards have only a secondary effect on specialisation and trade.