What are the determinants of the expected exchange rate?

What is absolute and relative purchasing power parity (PPP)?

What are the predictions of the monetary approach on the long-term evolution of the exchange rate?

What is the real exchange rate?

How can the monetary approach be generalized to take account of both real and monetary shocks in determining the long-term exchange rate?

As we have seen, the LT exchange rate is influenced by changes in the money supply.

in the short run.

In the long run:

The monetary model from the previous chapter is then grafted onto PPP. We will then have a theory (known as the long-run monetary approach) to explain long-term nominal exchange rate variations caused by monetary phenomena or by GDP growth. NB: this model describes the behaviour of the exchange rate in the long term and cannot be used to explain day-to-day exchange rate fluctuations (even if they are influenced by agents' expectations).

Finally, PPP is criticised by analysing the sources of its non-verification, which are just as many factors explaining fluctuations in the real exchange rate. A general model of the long-run equilibrium is derived.

PPP is based on the "law" of one price.

are the prices of the good

is tradable => subject to arbitrage between the two markets. Hp: no barriers to trade or transport costs.

are price indices (e.g. CPI). Same concept of the LPU, but on a basket of goods.

Verification requirements of [2a]:

(i) All goods are tradable.
(ii) LPU satisfied for each good.
(iii) Identical consumer baskets (same goods and same weight).

The exchange rate defined by PPP is a kind of theoretical, long-term exchange rate. If the exchange rate observed in reality is higher than the rate indicated by the ratio of price indices, it is deduced that the national currency is undervalued.

The Big Mac Index is published by The Economist as an informal way of measuring the purchasing power parity (PPP) between two currencies and provides a test of the extent to which market exchange rates result in goods costing the same in different countries. The index, created in 1986, takes its name from the Big Mac, a hamburger sold at McDonald's restaurants.[10]

Idea: consider the big mac as a basket of goods (same ingredients everywhere, traded on the world market => the LPU should be checked), with prices

. The ratio between the two prices gives the theoretical exchange rate :

The relative deviation from the current exchange rate,

, establishes the margin of overvaluation against the dollar (* = US) : 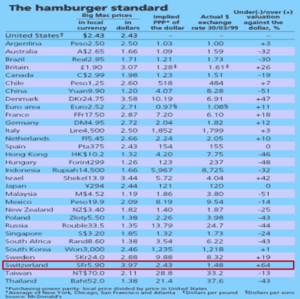 According to this criterion, at that time the CHF was overvalued -> expected depreciation.

No sign of convergence in Hong Kong... maybe in Ireland... or England in the late '80s. 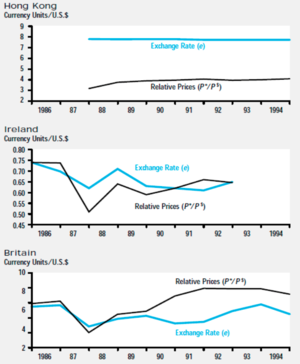 In general, lasting deviations from the theoretical relationship.

As lasting deviations from the absolute PPP relationship are observed, there is a softer version of PPP, called relative PPP, in which the exchange rate

is equal to the ratio of price

constant. This implies that

varies in direct proportion of

and in inverse proportion of

. In other words, this implies that :

is the growth rate of

the rate of depreciation of the national currency and

The monetary theory developed in chapter 12 shows us that in the long run the general price level is determined by the supply and demand for money :

The purchasing power parity theory developed at the beginning of this chapter shows us that the general price level influences the exchange rate :

The relative supply and demand for money determine price levels, which in turn determine the long-term exchange rate.

The 3 changes affect the supply or demand for money, which leads to changes in prices to maintain equilibrium, which causes an adjustment of the exchange rate to maintain PPP (immediate jump in all variables).

Predictions 1) and 2) are in line with the monetary model without PPP (long-run effects). Apparently 3) is problematic, as this result contradicts ch. 11 and 12 (where if

) are not the same in the short and long term, due to the different behaviour of the general price level,

But then: what does it depend on in the long run? Answer: on the equalisation of expected real interest rates (Fisher relation) :

Problem: Requires work on the dynamic version of the monetary model.

) that intervene in the interest rate parity.

Problem: based on PPP which is poorly verified

The PPP is not verified either in its absolute or relative version. 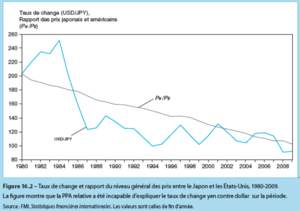 There are three main sources of non-verification of PPP :

Nevertheless, the theory that the exchange rate and the general price level are linked in the long run is a simple and useful starting point → generalization of the PPP principle by introducing the concept of the real exchange rate.

and fluctuates = lasting and variable deviations from the theoretical relationship are observed.

Problem: What are the determinants of

↗) -> the basket of goods produced abroad is + expensive (you need more domestic goods for the same quantity of foreign goods). Real appreciation (

↘) -> the basket of goods produced abroad is - expensive (vice versa).

The equilibrium level of '

' will be that which equals the relative demand for domestic products. (

) the relative supply of domestic products (

Since we are at long-run equilibrium, we will assume that the relative supply, RS, is equal to the ratio of full employment production levels :

Relative demand, RD, is a positive function of the relative price of foreign products :

The equilibrium RER is obtained when : 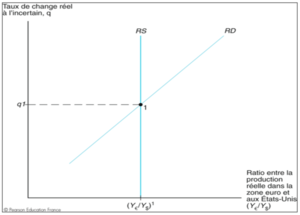 The long period model (where

Compared to the monetary approach (

), only the first equation changes. It decomposes the sources of exchange rate fluctuations into monetary shocks (

(idem to the monetary model)

2. Increase in relative demand for

according to PPP and any real disturbance influences

. When the disturbances concern the goods market, exchange rate movements do not check PPP, even in the long term.

in the short term: chapter 14.