If all countries are big and do the same thing this can have negative effects on international markets: trade wars

In order to avoid this scenario, multilateral agreements regulate international trade and what is and is not allowed in trade policy.

Framework: the World Trade Organization and its predecessor: the GATT

The creation of the GATT[modifier | modifier le wikicode]

The GATT (General Agreement on Tariffs and Trade) was signed in 1947 (23 countries) and came into force on 1/1/1948. It was a provisional agreement within the framework of the Bretton Woods agreements, pending ratification by the American Congress of the creation of the International Trade Organization (ITO). But this was never ratified. 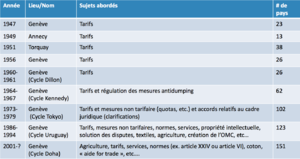 The fundamental principles in these agreements

The cycle with the greatest developments

Introduction of products in which developing countries had an export trade interest such as textiles and clothing and agriculture into the GATT rules, but far from perfect ... 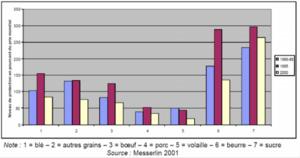 Introduction of agreements corresponding to the commercial interests of developed countries:

Creation of the WTO to regulate all this.

One of the important objectives of the Doha Round is to rebalance between developed and developing countries. The word "development" is found more than 60 times in the 11-page Doha Ministerial Declaration. http://www.wto.org/french/thewto_f/minist_f/min01_f/mindecl_f.pdf

The Doha Round: what is at stake?[modifier | modifier le wikicode]

Ministerial conferences were held in

for stocktaking = members must agree on how to complete the negotiations. Agreements on "intellectual property rights and public health Failure due to disagreement on agriculture (cotton) + on the "Singapore Issues".

several issues have been partially or fully resolved.

= for cotton, the phase-out is accelerated until the deadline of end 2006

= Developing country Members will also have the right to use a Special Safeguard Mechanism based on import quantity and price triggers, with specific arrangements to be further defined. »

= Suspension of the Doha Geneva negotiations in 2008

Agriculture absent from the GATT until the Uruguay Round. Formation of the Cairns Group which lobbies for the inclusion of this sector in the GATT rules.

Negotiation of the AAUR (Agriculture Agreement of the Uruguay Round) which will have rules different from those of the trade in manufactures:

2) Subsidy for prohibited exports except for

If notified. Then subject to reductions of 36% for Developed Countries, 24% for PeD and 0% for LDCs. Notified by 25 members. 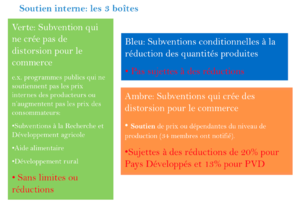 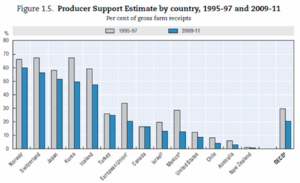 ... and especially those that cause great distortion...[modifier | modifier le wikicode] 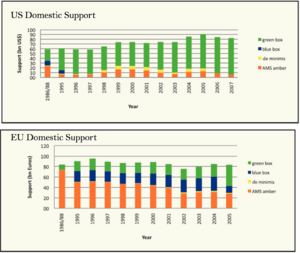 Subsidies vs. market access in the OECD?[modifier | modifier le wikicode]

Internal Support = not the main issue (and not necessarily distorting) 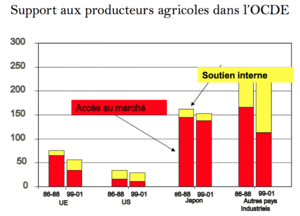 As a percentage of output valued at world prices - Source: OECD, GEP 2004

Or focus the negotiating effort for developing countries? What does theory tell us?[modifier | modifier le wikicode]

Subsidy is the least trade-distorting instrument because :

So the negotiating effort of agricultural exporting countries should be on market access and not on agricultural subsidies, if one believes the economic reasoning and the data.

But why is it not?

The international campaign against agricultural subsidies in the OECD ($50 b. of aid and $300 b. of agricultural "subsidies") has been very successful (driven by NGOs, the World Bank, etc.), and this "shame game" increases the power of the PeD negotiations.

Images of the PeDs: "we are there and you have to count on us because we can block everything" => pushing the limits to know their negotiating power.

Doha gains for PeDs are relatively small in all estimates, so not much to lose

Doha Round is not enough even for LDCs, even when trade negotiations are supposed to be very ambitious ...

Because loss for the importing countries ...

As we have just seen, in the Doha negotiations, one of the main demands of the PeDs concerns the agricultural policies of the developed countries that depress world prices and thus penalize foreign exporters.

The elimination of US and EU subsidies is expected to increase world agricultural prices, penalize net food-importing countries and raise security concerns in a number of countries.

cf. the expected loss for China in simulations of the expected gains from the Doha Round (study by Anderson and Martin, 2005, WB)

... and low gains for exporting countries

Erosion of tariff preferences (GSP, Everything But Arms, AGOA, etc.). When MFN tariffs fall as a result of the negotiations, the tariff preference granted by the EU and the US to PeDs decreases .

Sanitary, phytosanitary and other technical barriers are not considered and represent a significant barrier to exports of PeDs.

Complementary internal reforms and their financing in the LDCs are not part of the negotiation.

The Doha Round arose partly in reaction to what was seen as an imbalance in the multilateral system at the end of the Uruguay Round between the benefits for developing countries (incorporation of agriculture and textiles) and the benefits for DDs (TRIPS, services, TRIMS...).

The word "Development" appears 50 times in the 10-page text of the Doha Ministerial Declaration.

But there are many problems that need to be solved before Doha can deliver on its development promises for the least developed countries:

On the side of developed countries: proliferation of bilateral agreements to obtain progress on the points that were squeezed out of Doha (cf. the Singapore issues, the protection of intellectual property rights, etc.).