What is the field of study of international macroeconomics?

How does the foreign exchange market work?

What information is derived from a country's Balance of Payments?

What are the benefits of financial openness?

Types of transactions between

acquires a title of

acquires a title of

and incurs debt in relation to

A lot of trade within countries

35% of world trade is between developed countries

Growing importance of trade with Asia 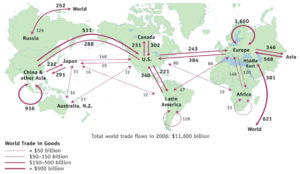 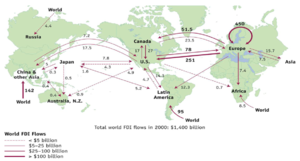 More liberalisation in the financial market and more financial transactions from the 1970s onwards, with some important differences between categories of countries.

What is the role of governments today in an economic system characterized by strong integration? What room for manoeuvre is available to States in terms of economic policies? What choice of exchange rate regime? What decisions should be taken on the rules authorising or restricting the free movement of capital?

As goods, services and investments cross borders, the exchange rate has a significant impact on the relative prices of domestic and foreign goods (cars or textiles), services (insurance or tourism) and assets (stocks or bonds).

It is important to understand the exchange rate fluctuations.

FIXED EXCHANGE REGIME: monetary authorities undertake to maintain their exchange rate at a publicly announced parity (the official value of the national currency in terms of another currency) so the exchange rate is relatively stable... except for occasional readjustments! Denmark, Latvia and Lithuania peg their currencies to the Euro; China has pegged its currency, the yuan, to the US dollar.

EXCHANGE CRISIS: A sudden and very large loss in the value of a country's currency relative to other currencies after a period of stable exchange rates. Very important economic consequences, all the more so if the country is heavily dependent on imports and foreign capital.

An exchange rate crisis can put a country in default (the country cannot honour its debt repayments).

Can also be associated, in extreme cases, with political and social instability (Argentina crisis in 2002). 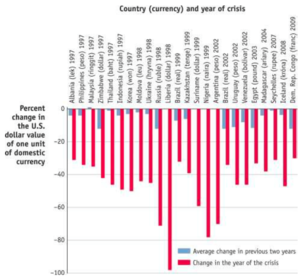 To understand the financial interactions between countries we need to use a framework comptable→ the PAYMENT BALANCE allows us to monitor how a country's indebtedness to the rest of the world evolves, the health of its industries subject to foreign competition, or to understand the links between foreign transactions and the supply of money (the very first part of our course).

EXTERNAL POSITION: the current account balance and capital gains/losses will change the credit or debit position of the country vis-à-vis the rest of the world.

ECONOMIC POLICIES are defined to achieve macroeconomic objectives, such as keeping inflation low, stabilising interest rates, mitigating the effects of a recession.

Key decisions to be taken by the government:

International macroeconomics studies phenomena that relate to the economy as a whole (MACRO-economics), between interdependent economies (INTERNATIONAL).

Since the 1970s → general movement towards more financial liberalisation (gradual removal of restrictions on capital movements. This has led to an increase in the volume of international financial transactions.

The balance of payments is the national accounts document that makes it possible to monitor the development of the country's international investment position.

The two main choices in terms of economic policy that the government has to make concern the choice of exchange rate regime (floating versus fixed) and the rules on the free movement of capital.