What is a country's external position?

How does it relate to GDP or national savings?

What are the different items in the balance of payments?

How can these different items be interpreted correctly?

GDP = sum of value added of all goods and services produced in the country. 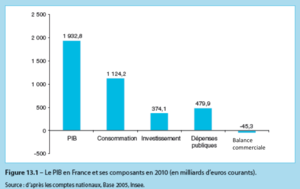 As we have just seen, GDP and GNI do not coincide. In particular, for a debtor country (net importer of capital or labour services) the 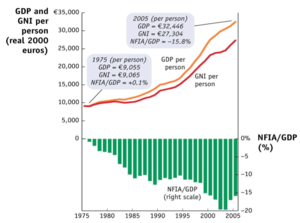 Simplification in the model: capital depreciation, taxes and subsidies assumed to be negligible --> "

" is both national product and national income :

In an open economy, the current account is the difference between income and expenditure (or absorption) and reflects the change in net foreign assets over the period = the financing capacity of the economy.

The surplus of private savings over I is used to finance the government deficit and the current account. Put differently, domestic investment can be financed by savings or by a current account deficit. 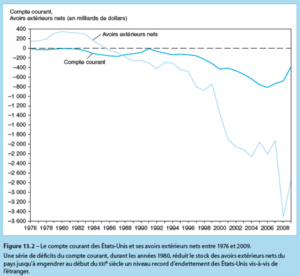 An open economy can save either by developing its capital stock (as in a closed economy) or by acquiring external assets (example of intertemporal trade: the NZ building a new hydropower plant).

Equation [5] is a fundamental accounting identity, but not an economic model → beware of misinterpretation. Example: KO case study 13.1: the case of 'twin deficits'. USA early 1980s: expansive fiscal policy → public deficit → CC deficit. EU in the 1990s: the reduction of EU deficits - to meet the Maastricht criteria - did not result in a CC surplus. Why not? Because private savings decreased almost as much as the increase in public savings (possible explanation: Ricardian equivalence). → No automatism → Need for an economic model that EXPLAINS the links between the variables involved in identity.

All international transactions are recorded in the balance of payments.

Any transaction that leads to foreign exchange earnings from abroad (exports of goods or assets) is recorded with a positive sign indicating a credit (+).

→ supply of foreign currency (or demand for domestic currency).

→ demand for foreign currency (or supply of domestic currency).
→ If

is Switzerland, any transaction leading to a demand (offer) of CHF is recorded as a credit (debit).

Interpretation: CC indicates the net financing capacity of the economy relative to the RDM (e.g. a surplus of 100), and CK,CF indicate how this capacity materializes (e.g. a debt reduction of 20 = ↘ of domestic assets held by RDM and a debt increase of 80 = of foreign assets held by residents) => the balance of payments is always in equilibrium.

Each international transaction automatically enters the PB twice, once as a debit, once as a credit (again, the balance of payments is always in balance).

Ex. 1: The company PRECISA from Geneva sells watch cases to its French customer ARTHUS from Besançon. ARTHUS pays the customer:

(i) by liquidating its cash voucher position at the BCG.
(ii) by drawing a cheque on its Belfort CA account. PRECISA takes the opportunity to increase the French securities it already holds with the CA.

Ex. 2: Fiduciary BONCOMPTE of Geneva imports computer equipment produced by the company OLIVETTO of Turin. It does so: 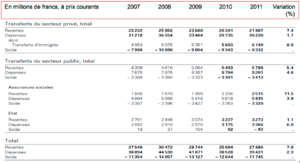 Current transfers from the private sector:

Current transfers from the public sector:

Debit: Payments related to the movement of capital from the country to abroad (purchase of a foreign security)

Credit: Payments related to the movement of capital from abroad into the country (sale of a domestic security)

Capital account (CK) = any asset transaction not listed in the CF 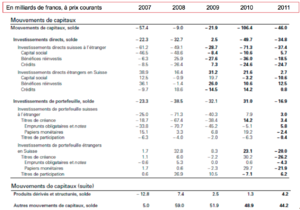 Capital account (CK) = any asset transactions not listed in the CF.

Debit: An increase in reserves

Credit: A decrease in reserves

A surplus on the balance of accounts increases official gold and foreign exchange reserves; a deficit decreases them.

All transactions are theoretically recorded on both the revenue and expenditure sides, so the two totals should be equal. In practice, this is not the case.

The residual item is the difference between the total "revenue" and the total "expenditure".

This difference is due to gaps and errors in the statistical records. 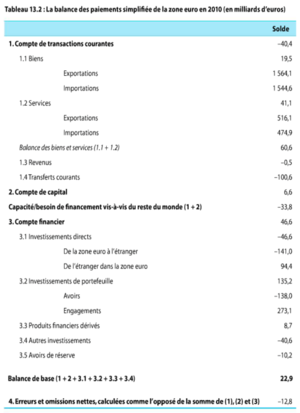 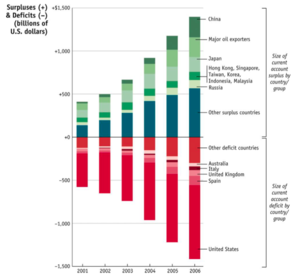 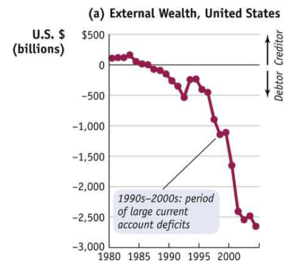 Capital flows from emerging to developed countries: not in line with the theory of intertemporal trade (see trade course).

The net position of a country also depends on changes in the value of assets.

Default risk: since 1980, 14 countries have not paid their debts due to foreign exchange crises → country risk ↑ 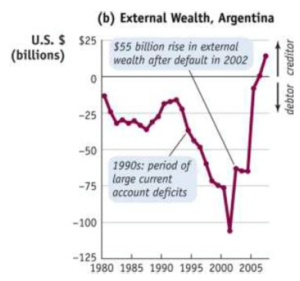 Consequences of default: the country becomes less attractive for foreign investment and the country will have to pay higher interest rates.

Country risk: The additional interest rate that a country must pay to compensate investors for the risk of default. Example in June 2010, according to the Financial Times, compared to U.S. Treasury bills: 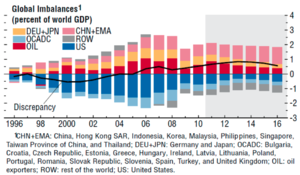 A country's international investment position is frequently measured by the current account balance (CC) or the basic balance (BB).

In terms of macroeconomic aggregates, CC is equal to the difference between gross national income and domestic absorption (or expenditure).

CC is derived from the trade balance and the factor income balance. It reflects the external financing capacity (or need) of the country concerned.

The various items in the capital account (CK) and financial account (FC) indicate the materialisation of this financing capacity in terms of changes in assets held.

The balance of the BB indicates the capacity of the Central Bank to honour its commitments under a fixed exchange rate regime.

External imbalances have increased sharply since 2001.