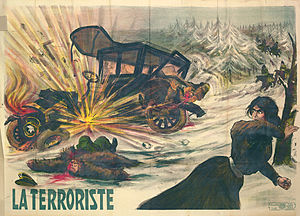 With the completion of the first phase of the Relaxation, the dismantling of a Western order guaranteed by the American power, the new indirect East-West and North-South conflicts are redefining terrorism to fully integrate it into the relations between large systems and blocs. The barbaric/civilized dichotomy is elaborated as a true category of analysis and thus allows for the reclassification of the classic terrorist act in a simplified and globalized form. The notion of "international terrorism" symbolizes the integration of this form of violence into the theory of international relations and strategic thinking. The "good practices" of the barbaric/civilized dichotomy will be at the centre of many geopoliticians' and strategists' theories. The growing success of these analyses, in order to affect the representations of political actors on both sides of the Atlantic Ocean, has a direct impact on the representations of the field of international relations.

The 11 September attacks are a fundamental breakthrough. Terrorism elevated to the rank of "global" is being reinterpreted as the new form of North-South warfare. The "War on Terror" proclaimed by the Bush administration is now re-ordering the field of international relations. From Afghanistan to the rogue states, from the project in the new Middle East to the European Union, or even Russia and its allies, the unilateralist American choices are transforming in depth the entire multilateral system of international relations elaborated on the ashes of the Cold War, symbolized by the fall of the Berlin Wall.