Cantino's 1502 planisphere is the oldest representation of the voyages of Christopher Columbus in the Caribbean, Gaspar Corte-Real in Newfoundland, Pedro Álvares Cabral in Brazil and Vasco de Gama in India. The meridian of the Treaty of Tordesillas is represented.

During the 19th century, from 1815 (end of the Napoleonic wars) to 1914 (beginning of the First World War), some important economic developments took place. 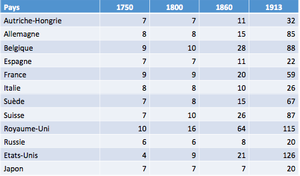 At the beginning of the long 19th century, the industrial revolution had affected only a small part of Europe and an even smaller part of the rest of the world. This group of industrialized countries did not even represent 4% of the world population at the time; we are talking about a very small minority of the world. 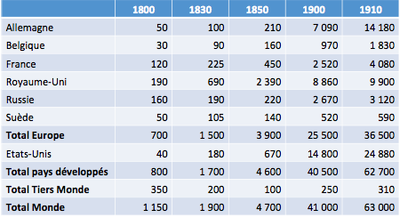 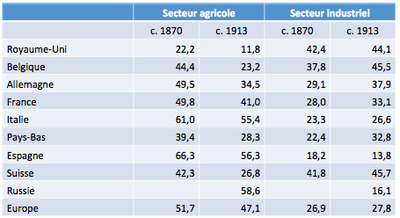 Labour force by sector as % of the country's labour force.

In the case of the United Kingdom, we already see in 1870 that there is an important and dominant industrial sector for the United Kingdom and its economy. It is an atypical case because it is the first world power, in the case of Germany there is an increase of this sector during this period. If we look at the United States, which is not included in this table, the agricultural sector remains important for its economy, accounting for up to 1/3 of its economy. In Germany the same thing is happening, the agricultural sector is not negligible.

There were also qualitative changes, towards the 1870s we witnessed a diversification of industrial products with the emergence of new sectors. Some historians speak of a second industrial revolution from 1860 - 1870.

Chemicals and electricity are growing, representing new industries. It is mainly the steel industry that is concerned, but we can see that there is a transformation of production processes in the rail sector.

The technical innovations allow a reduction in the price of steel with very important gains not only for the use of steel, but which opens a very vast gain of possibilities for the application of steel to the construction of buildings and bridges. But the most important use is for railways. The steel sector provides more durable and less expensive equipment.

Textiles are also concerned with major transformations in their production process. The consequences of this intensification are important in themselves. These changes have important consequences for the economy. We see that there are economic spinoffs for the rest of the economy.

Technologies developed in the industrial sector have effects everywhere in the economy. Agriculture is the best example with innovations such as harvesters and chemical fertilizers that transform the functioning of the agricultural sector leading to a significant reduction in production costs triggering competition between the world's agricultural sectors.

It is a revolution for means of transport that are relatively traditional like the horse. The animal has not changed much, but it is especially the fact that the horse is equipped with better hooves, pulls better cars creating opportunities, advancements, reductions in transportation costs. The road network was also improved with the invention of macadam, which made it possible to cover roads with durable material. We can also talk about the canals. We also see that there are upheavals in the transport economy directly linked to the industrial revolution beginning around 1825 with the involvement of the steam engine in transport.

We are talking about the railways, which are the image of modernity. The great upheaval was in 1814 when Stevenson invented the first steam engine. The commercial application of this invention took time, which is why the first line was opened in England in 1825. In 1830 the line from Liverpool to Manchester was opened.

By the middle of the century, London was connected to almost every other major city by rail. The continent followed slowly at the beginning and more rapidly thereafter. In France, the first major lines linked Paris to the major cities around the middle of the 19th century. 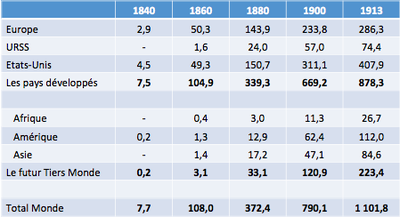 Length of railway lines operated in thousands of kilometres.

If we look at the industrialized countries, we see a major construction of railway networks. For a country like the United States this continues a little later. What is most interesting is the fact that the railways in the countries of the future Third World make it possible to highlight that they too participate in the development of railway networks. We see that the growth of the world network is extremely rapid during the period from 1840 to 1913.

The railways did not in themselves give rise to industrialization, but they accompanied it. In order to make the railway possible, the steam engine was necessary, but also to reduce the price of iron to build tracks. The development of the railways is based on development and innovation in the steel sector. Companies in the steel industry, as in the United States, depend on railway orders to increase sales. 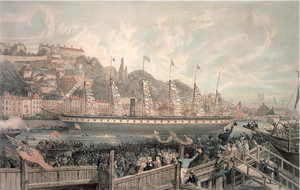 The launch of the steamship The great Britain in the presence of H.R.H. Prince Albert.

As early as the 19th century, wheel steamers appeared, freeing navigation from the whims of the wind. The steamers will connect the lake and the rivers, but that remains limited for technical reasons, because it is necessary to supply these steam boats what is difficult to make in high sea. Nevertheless there are technological advances that became possible across the Atlantic Ocean as early as the 1830s.

Regular services were provided around the 1850s, accompanied by a major effort to build ports and coal installations.

Infrastructure must be built to allow steamships to cross the world's oceans. Initially, these steamers carry high value objects so the waves of products are quite small. With technical progress, the range of products transported becomes much wider and we also see that there is a drop in transport costs allowing the inter-oceanic transport of fragile products such as tropical fruits. There is a transformation of opportunities for international trade.

There is competition between clippers who are sailing ships and steamships. During the period from 1850 to 1880 this rather brutal competition took place. Around 1870 the steam fleet represented 50% of the total fleet and transport capacity. In 1910, the tonnage of steamships far exceeded that of clippers. Steamships ensure regular connections and speed. Sea routes seem all the more shortened as the inter-oceanic canals shorten certain particularly difficult routes. 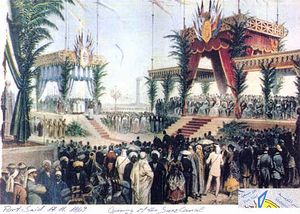 The Suez Canal partially supplants the Cape roads. The ability to navigate the canal results in significant savings in travel time. For example between the UK and India, this gain is 41% for a trip from Liverpool to Bombay.

The Panama Canal was also built to link the Atlantic and Pacific, but the project was abandoned in 1889, however the project was resumed afterwards. A lock canal was built by the Americans and opened in 1914.

Jules Vernes wrote his book "Around the world in 80 days" as part of the transport revolution that lowered freight prices in the 19th century. This fall in transport costs makes lowland crops profitable, as in Argentina and Australia, which will export their crops to Europe. 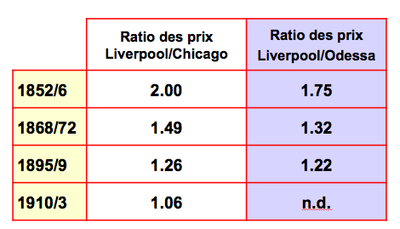 In 1850, the price of wheat in London and 2 times the price in Chicago, but in 1913 the price is almost similar. This convergence can be put on the reduction of transport costs. 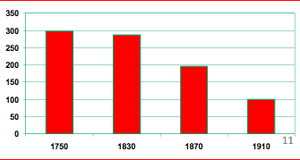 We see that there is a 65% decrease between these two periods. For the London - New York trip. Something as striking is the impressive decline between Chicago and New York.

When we talk about the extension of communications networks, we are mainly talking about telegraphs either within a country or between countries. Concerning the telegraph network in the United States, it was not until 1839 that the first telegraph line for a railway line was opened. The development of walrus from the 1840s allows us to see the application of this system. After 1845, the telegraph exploded, especially in Great Britain and the United States.

The telegraph network in the United States.

The transatlantic cable network is a technical challenge. This map shows the first transatlantic cable between Newfoundland and Ireland. However, it is a failure. A new cable was installed in the 1860s and links were established between all continents.