It is with the brutal collapse of American imports linked to the crisis of 1929 announcements the beginning of a real-world crisis. The consequences for the international economy are brutal.

We can see that in 1903, American imports were 20 times lower in value. There is a fall in value, but also a fall in prices. We are talking about a major economy, which is why the consequences are important for other countries, particularly those exporting to the United States.

In 1929, Cuba exported mainly to the United States in 1929; in 1932, only n’est of the 1929 amount was exported. Almost every economy in the world is affected by this development. The change in imports from the United States is weighing on the international economy. 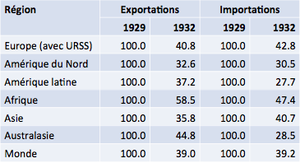 There is a crisis through the negative multiplier that affects almost every country in the world. The United States also contributes to the reduction of world trade through the passage of the Smoot-Hawley Tariff Act, which is a tariff that inaugurates a bidding war for global protectionism, that is to say, a revenge for other countries' tariffs. This makes a difficult situation even more difficult.

Vulnerabilities of the international crisis are linked to financial vulnerabilities of the economic system of the time. Countries are caught early between the value of their exports and the high value of their debt. These countries show that there is the potential for financial dependence to create vulnerability to international shocks. The fall in imports makes the situation more difficult for them, despite their efforts to devalue the currency in particular, their situation is worsening with payment defaults which aggravate the situation. They are already hit by the international trade crisis, and the fact that they are in a particularly vulnerable financial situation makes the situation particularly difficult.

We see the same interaction between the financial crisis and economic problems more generally for certain European countries. As payment defaults develop for commodity exporting countries, the financial market becomes increasingly concerned about payment defaults. This concerns in particular Austria, Germany and Hungary where international investors find different types of financial vulnerabilities. These are countries that emerged from the First World War with very weak economies and their banking systems are particularly weakened because of the hyperinflation we saw in the 1920s. This banking system is increasingly dependent on foreign debt and in particular short-term debt. The particularity of these banking systems is that the dependence on short-term debt goes very badly with another characteristic of their banking system which is that they are part of the universal banking tradition leading banks to invest in industry with a significant part of the resource that is immobile, i.e. to lend in the long or medium term. There is a growing inconsistency between their short-term debt, which is very volatile, and their long-term assets, which are almost immobile. It was this inconsistency that caused the problem of financing these banking systems in the 1930s.

The problems began with Kredit Anstalt, Austria's largest deposit bank, which suffered a crisis in May 1931. Kredit Anstalt loans are becoming increasingly liquid. This bank depends more and more on short-term liquid deposits. With the growing international crisis, there is some concern about the share of international investors who are starting to withdraw their liquid deposits from this bank. In May 19391, Kredit Anstalt acknowledged debts greater than its capital required assistance from the Austrian government. Government intervention does not reassure and deposits continue to be withdrawn not only from Kredit Anstalt but also from other Austrian banks. The State provides massive liquidity to increase confidence in the stability of banks, but with such liquidity creation, the question of the convertibility of the shilling arises. Creating devaluation, depositors transfer their funds abroad. The flight of savings is melting the country's economy. Austria is looking to have an international loan coming in, but it is too late and too small.

These loans are controversial since during the negotiations it is revealed that Austria and Germany are setting up a customs union which France denounces as a violation of the Treaty of Versailles. Finally, it is necessary to establish an exchange control system set up first informally by the Austrian banks and then formally at the end of September.

The crisis goes from Austria to Hungary because Kredit Anstalt controls Hungary's largest bank. With Germany, the link with the banking crisis is less clear. The question that arose at the time was whether foreign investors were able to distinguish between German and Austrian investors because they did not understand why this crisis had erupted. There are the same structural vulnerabilities in the banking system, perhaps explaining the origin of the crisis and the problems of the financial situation.

The international community tried to act to avoid the worst and President Hoover launched a 1931 moratorium leading to a temporary suspension of payment of reparations from Germany to France. However, the solution comes too late. The bankruptcy of a textile company client of Nadnat Bank precipitates the crisis in Germany. However, we see a banal sequence that leads Germany to impose exchange controls at the end. It is the high dependence on short-term debt that is the most important feature that Germany shares with Austria and Hungary. It is this characteristic that makes these systems and the three countries vulnerable. In Germany, exchange controls are established, but there is a difference to be made. With the establishment of exchange controls, Germany is no longer forced. Yet Brüning continues to follow the gold standard mentality by following a strong deflationary policy because there is a fear of galloping inflation. It is a fear that affects not only Brüning, but also Hitler. Brüning is ready to let go the deflationary policy that develops a deep economic crisis with an increase in unemployment participates in Hitler's capture of unemployment.

The will of European political elites in Europe is to continue under the discipline of the gold standard. These three banking crises will be followed by a shift of the crisis towards London. The major British deposit banks are not threatened. The banks under threat are the merchant banks. The main problem is the important role in financing international trade and German trade because their debt payments are frozen. It is not possible to repay debts to investment banks in London, but an agreement is reached with some payments in foreign currency for interest, but that their principal remains frozen. This negotiation and this agreement mean that we cannot really talk about a banking crisis in Great Britain. However, in Britain we see a currency crisis. The book remained vulnerable in 1931. There is an overvaluation of the pound meaning that there are problems for the country's trade balance making it much more difficult for Britain to export products and services. With the decline in international trade, this weighs even more heavily on Britain's current account. Increasingly, international investors consider it difficult for Britain to maintain parity in its currency. There is also the problem of the level of economic activity in Great Britain, which is too low, particularly because of the deflationary depression. Investors expect something to happen with the development of a socio-political crisis. Gold losses began and in September 1931. The British government suspends the gold convertibility of the pound. It is becoming increasingly difficult to save the value of the pound.

With the United States there is a battle between the central bank and investments to keep the gold standard, but the pressures on the dollar are too high. One of Roosevelt's first actions elected president is to suspend the convertibility of the dollar. There are other countries that continue to keep the convertibility of the currency only gold until more 1936 as for France. We see the collapse of the international monetary system with the decision of Great Britain and the United States to leave the gold standard.