Review of the Taylorian-Weberian model of the organization: The School of Human Relations[modifier | modifier le wikicode]

There is a critique of the organizational model found in many others. At Taylor, Ford and Fayol, there is a very strong division of labour, a horizontal division of labour, the issue of motivation and collaboration does not matter. In exchange for strong subordination, subordinates have physical security that can be guaranteed to them as incentive pay.

Taylor proposed the Scientific Organization of Work (OST) model to streamline work processes with a vertical division for design and execution, a horizontal division for activity breakdown and incentive pay, as motivation would come from pay. Ford was the first to systematize the working relationship with standardization and mass production, chain work and the implementation of a purchasing power policy. As for Fayol, he developed an approach to the administrative function with planning, organisation, command, coordination, control and adequate remuneration.

In these three models, there is an exchange in the context of subordination of work, material security and wages. However, there are several advantages and disadvantages to this type of organization:

This is the dominant model established following the designs of Taylor, Ford and Fayol which was widely adopted by early 20th century firms.

The company cannot be conceived of as a mere machine, but it must take into account the fact that the individuals working in this company are human beings with freedom of thought and freedom of action. If this is not taken into account, counterproductive behaviour may be hindered.

Labour productivity studies were conducted at Hawthorne's Western Electric plants in Chicago, USA. The company, for a long period of time between 1927 and 1932, agreed to subject a number of its employees to a number of experimental conditions to see how to improve worker productivity and performance. An experimental system was set up with 6 female workers and variations in employment conditions. Twelve successive experiments were carried out with changes in working conditions and variations in production. Many experimental measures have been set up first of all around the issue of brightness, then salary, different breaks and holidays. All these variations, whether in terms of working conditions, wages or working hours, lead to an increase in productivity. If these factors are taken into account, productivity would be something that would escape all these factors.

The conclusion is that, in fact, there are two components that have made it possible to understand why this productivity was increasing and that it was constant in all experiments:

A first critique highlights the managerial aspect of Mayo's approach. The result could only be biased. Another criticism is that the method is not rigorous, many things are questionable in the way in which the experiment was conducted especially because of the modularity of the group with workers who have been replaced by others, Another criticism is the sample size which was considered too small to draw inferences, the third criticism is that the methods are questionable and in particular the fact that they completely overshadow the role of wages in the idea of increasing output, as workers would work to develop. Salary seems to be more important than the study suggests. The results appear to be questionable and the role of wages appears to be more important.

The hidden nature of the Hawthorne effect[modifier | modifier le wikicode]

There is also a need to address the "human factor". Mayo's experience highlights the Hawthorne effect. This effect means that people, when they are subjected to observation, integrated into the experience and feel that there is a look at it, these people will de facto go to more trouble than if they are left to their own devices. The selected individuals will alter their behaviour because they are in the experimental set-up. In psychology, the Hawthorne effect describes the situation in which the results of an experiment are not due to experienced factors, but to the fact that subjects are aware of participating in an experiment, which usually translates into greater motivation. In other words, subjects' behaviours and attitudes are modified when they are aware that they have been selected and distinguished in an experimental setting.

Mayo's experience thwarts dominant theories such as Taylorism and Fordism. The idea put forward is that if we want to increase productivity, we must get out of the subordination to work, we must not consider the human being as a machine, but we must consider it from the point of view of motivation and involvement. We need to find new ways of involving people. On the other hand, employees are not only driven by profit motives but also by consideration and recognition, which play a very important role. This is consistent with a psychological employment contract. It is a job where the person can realize himself/herself by withdrawing goods done for his/her development.

What can we learn from this experiment? There is an emphasis on the importance of the "human factor" and the fact that the company is not a machine, but a social system. Formal organizations are always juxtaposed with informal groups that must be taken into account in order to increase the output and productivity of workers in a given company.

By the time they were announced, Mayo's conclusions were pleasing to everyone:

Following Mayo and this experience, in spite of all the criticisms, psychosociological approaches between individuals and organizations will emerge. 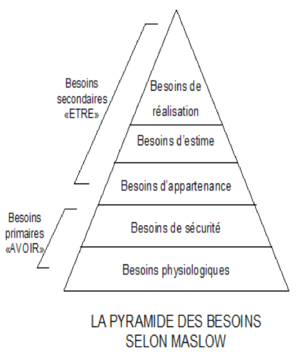 Maslow shows that there are other needs than just the primary needs that relate to having it, and that must be taken into account if we want to go in the direction of involving the motivation of the individual. It will develop the Maslow pyramid, which analyses basic human needs. Maslow's idea is to say that in order for a person to be successful at work, he or she must go through all of these needs. Taylorism, Fordism and fayolism stop at the bottom two floors of the pyramid. To increase efficiency and performance, the second stage must be developed.

Maslow's theory has never been empirically proven. There is no evidence to suggest that the first two floors are needed to get to the next floor. While this theory categorizes human needs, the hypothesis that it is necessary to go through the satisfaction of primary needs in order to move to higher stages - motivating factors - has never been verified by an experimental design.

For Maugeri in Theories of Motivation at Work published in 2004, it is necessary to see a pragmatic one, because the research carried out on this subject has almost all been conducted "for the sole purpose of helping managers and specialists in human resources management to find the right organisational formulas, the right division of tasks, the right principles of delegation and control of activities[.in order to lead the worker, whatever his status and position, to give the best of himself for the firm that employs him ". The notion of motivation will be at the heart of the field of human resources management. Human resources management will ensure that the work of Mayo and his successors is fully focused.

Motivation at work: some concepts and paradoxes[modifier | modifier le wikicode]

There are generally two types of motivations:

The question of human resources management will be how to combine these two types of motivations, how to make sure that people are really motivated and what tools will increase this motivation. It is about finding the right combination that will improve and increase people's involvement and motivation.

Three misconceptions about motivation are often put forward in the literature:

How can we create involvement at work? Three sources are highlighted in the psychosociological literature:

These three ways of involving workers are not mutually exclusive. All three forms of involvement can be combined within companies.

Participatory management is the result of all psycho-sociological approaches that change the way of conceiving the relationship between the individual and the organization.

According to Fayol and Weber's model, when we talk about organization from a manager's point of view, we generally identify three problems that need to be solved:

With participatory management and psychosociological approaches, it will be considered that workers are not just performers, but that they have something to bring to the company. The goals remain the prerogative of the managers, the means are defined by the people in the field, the coordination is left to the actors in the field who will work as a team to reach the best solutions in order to achieve the assigned results.

In the first case, organizational problems are the prerogative of the chiefs, while in the other model, the goals remain the responsibility of the chiefs, while the question of means and coordination is left to the workers. This debate is at the heart of current changes in public administration. New public management is a form of participatory management applied in the field of public administration.

The psychosociological approach has revolutionized human resource management. Within the framework of participative management, the autonomy and creativity of the workers will be sought, but within a predefined framework. It is an autonomy framed in terms of objectives. The objective will be defined by those in charge and autonomy and creativity will be called upon to achieve objectives. However, this raises three risks:

In this context, there is no more subordination to work. Organizations are called upon to become learner, intelligent and adaptable in different situations. The human resources strategy in this framework will be to empower workers. Many tools are put forward which may sometimes seem childish, such as the obligation to set objectives in comparison with previous results. Giving workers versatility is also a way to motivate people because it makes work more varied. Another tool is the merit-based salary and the solicitation of teamwork, which will also make the work more interesting because there is a collaborative aspect to it. Different strategies can be mobilized to try to involve and motivate workers to make sure that together they will coordinate and look for the best working methods to achieve the objectives that are defined by others.

The most important tool is the corporate culture. If people internalize the culture of the company, it means that they are committed to the objectives and this drives them to put their creativity at the service of the company. The most important tool is to ensure that employees internalize the corporate culture, because the success of the company becomes a goal of their own success. For some authors, there is a "narcissistic contract of success". The human resources manager will have to instil the company's culture in the workers. If we manage to make this bridge, convince the members of the company, from the point of view of participative management, the guarantor of the corporate culture becomes the worker himself. We are no longer in an external control system, but in an internal control system. There is a "alienation of bodies and minds".

Public service motivation (PSM) is "a conviction, values and attitudes that go beyond the self-interest or that of an organisation to take into account the interest of a broader political entity and that induce, in a public interaction, a motivation to conduct a defined behaviour". The idea is that the public interest and the general interest are much more important than the salary they can receive or the guarantee and security of employment.

Perry and Wise in The Motivational Bases of Public Service (1990) show that this particular motivation for public service can take three forms:

A study by Emery and Giauque, published in 2003 entitled Paradoxes de la gestion publique, shows that motivational configurations in public organizations marked by new public management depend on two dimensions:

(a) the degree of adherence to "managerial" values: do people adhere to managerial management?
(b) mastering entrepreneurial behaviour: can they behave like managers, integrate managerial values and be effective.

On the basis of these two criteria, the two authors identify four main configurations are: