The bureaucracy began to establish itself in the 19th century and even at the end of the 18th century in Prussia with Frederick II. The bureaucracy left a great deal of room for judgment by the directors with a lot of arbitrariness and discretion. There was a public administration marked by many forms of arbitrary drifts and discretionary power. Many criticisms have arisen calling for the implementation of another model.

Max Weber made an essential theoretical contribution to the socio-political analysis of bureaucracy by pointing out the relationship between the exercise of a legal-rational authority characteristic of the modern state and a form of bureaucratic organization characterized by the professionalization, hierarchization of functions and impersonality of rules. Previously, we were in an erratic model, now it is a more professional, formalized and hierarchical model.

At the same time he gave a very complex theory of society, in which the problem of relations between bureaucracy and power occupies an important place, and a very structured model of bureaucracy. The purpose of these characteristics is to maximise control and predictability of civil servants, with a view to greater rationality of public administration. This model has been presented as a "steel cage" to ensure the efficiency of the public administration should not have to leave liberties otherwise civil servants will do anything.

The bureaucracy is part of Weber's design. To understand Weber's bureaucratic theory, it is necessary to situate his model within the general framework of his conception of state, politics and power. The State needs to rely on an administrative apparatus, there is a link between the State and the administrative structure, there is no empowerment between the two bodies. The State is responsible for enforcing the laws and defending the territory against external aggression, which requires an administrative apparatus.

In Economy and Society published in 1921, Max Weber defined the State as a {{citation}political undertaking of an institutional character when and as long as its administrative management successfully claims, in the application of its regulations, the monopoly of legitimate physical coercion on a given territory}}}. When we talk about the state, it is said that the state has a monopoly on legitimate physical and symbolic violence. At the heart of this notion of democracy is a relationship with the state, which exercises power and dominance over the members of a community.

For Weber, politics is the activity that claims, for the authority established in a given territory, the right of domination, with the use of force, even violence, to maintain internal order and defend the community against attacks from outside.

Dominance and power are therefore at the heart of politics.

Legitimate power is not only based on coercion, but also on the conviction of the legitimacy of the orders that the power will know.

Max Weber has developed a typology based on the specificity of the motivation that drives obedience: 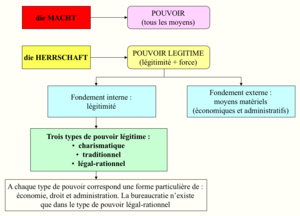 For Weber, there is a link between modern state capitalism and democracy. In order for capitalism to function properly, it needs clear rules of the game that are embodied in the bureaucratic model and that are not erratic. A predictable model is needed to build ways of operating capitalism that will increase prosperity.

What are the conditions for the existence of rational power and bureaucracy? How does Weber view the structural level of democracy? How can the management methods of the official be envisaged at individual level?

Weber will propose five conditions for the existence of legal-rational power and bureaucracy:

At the structural level, Weber wonders what principles should be respected at the macro level and how the bureaucracy should be structured. It will identify eight fundamental categories of the legal-rational power of bureaucracy:

At the structural level, the question of impersonality and procedural fairness is important, the question of the specialisation of staff is essential, the notion of a highly hierarchical system is paramount, the separation between private and professional life and the notion of continuity of public administration is central.

It is a public service concept that is very much in line with many hierarchies and directives that refer to the term "steel cage". The objective of these ten characteristics is to ensure both good coordination of administrative activities and predictability of staff behaviour. One of the objectives is to improve the efficiency of public administration in achieving the objectives, but with the least possible cost. This design improves both effectiveness and efficiency by controlling public servants. According to the principle of legal certainty, the rules will be enforced in an impersonal manner to ensure that there is equal treatment.

According to Weber, the rationality of bureaucracy lies in its formalism, in the knowledge or skill it possesses and in the tendency of civil servants to perform their duties in accordance with the interests of citizens. This system makes it possible to guarantee that officials will actually act in the general interest. The civil servant will have the motivation of the public service.

Once the bureaucracy has settled down, it is one of the most difficult social formations to cut down because of three fundamental factors:

Weber shows that the bureaucracy is better, more effective and efficient and that it would also be inevitable. Weber's design has been criticized and criticized over the years.

Freund will summarize the Weberian thought through eight points: 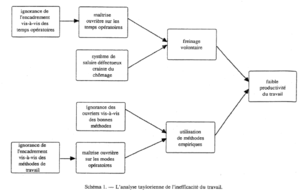 Taylor had an approach based on private companies with a question on how to increase the efficiency of private companies. For Taylor, if companies are inefficient, it is because the working methods are decided by the workers. The management would have nothing to say about the worker's way of working. The autonomy accorded to the worker, the trust placed in the worker is, according to Taylor, the cause of business inefficiency and inefficiency. It is because workers control the production process that firms produce less than they could produce.

These modes of operation must be changed and a specific power structure imposed. Taylor will promote the idea of scientific organization of work. The working methods will not be left to the workers, but to the engineers. The spirit of controlling the worker, of controlling the civil servant can be found as much in Weber as in Taylor.

Henri Fayol goes in the same direction as Weber. Fayol is a French management theorist. If a human organization is to be effective, efficient and achieve its objectives, it must comply with the fourteen principles identified. Compliance with these principles should be a guarantee of effectiveness and efficiency. Four main principles can be distinguished: hierarchy and order, motivation pay and discipline, on the basis of which fourteen principles are derived:

According to Fayol, if we respect all these principles, we would have an "administrative code" that would allow us to effectively manage the administration.