The administration is one of the key actors in any public policy involved in putting issues on the agenda that are attractive to public policy, but also in the implementation of laws and ordinances. We will discuss the administrative phenomenon in Switzerland.

State quotas are indicators used to measure the share of the public sector in a given country. Quotas relate public expenditure to gross domestic product. 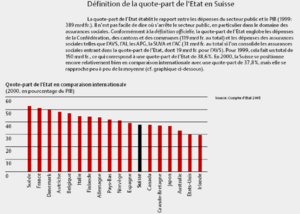 The State's share is based on statistics produced by the State. It is difficult to know what is being put into public spending. The Swiss occupational and health insurance system differs from the social security system in France or other countries. If these compulsory levies are added, then Switzerland's share of the tax is around 50%. There is a debate about whether Switzerland can be described as a liberal state with a low quota or whether Switzerland is moving towards a directist economy. 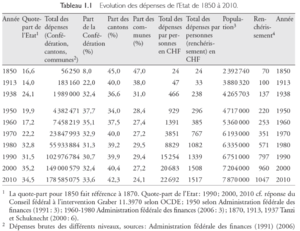 If we look at the diachronic evolution of the State quota in 1850, the quota was 16.6%. There is an increase in public interventionism by the public sector in the Swiss economy. This growth began in the 1960s and 1970s with the advent of the welfare state. There has been some growth in the various public policies, such as environmental public policies. 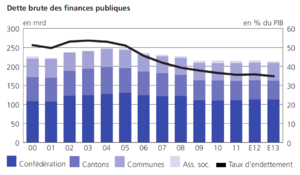 The federal government spends around 63 billion a year. This graph shows the cumulative debt. The debt between 2010 and 1013 tends to fall below 60%. With the Maastricht criteria, the debt cannot exceed 60% of GDP. Although Switzerland is not a member of the euro area, it is committed to meeting this criterion. Switzerland is not subject to the Maastricht criteria. Against other euro-affected countries, their debt is exploding. Switzerland has a healthy financial situation.

In Switzerland, the financial situation being sound, this will have an impact on public policies. We are talking about public administration in a federal state by looking at the situation at the federal level. 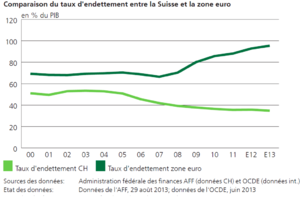 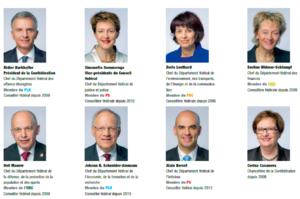 In Switzerland, the financial situation being sound, this will have an impact on public policies. We are talking about public administration in a federal state by looking at the situation at the federal level.

For some political scientists, the Swiss system favours departmentalism. The Federal Council defends the interests, prestige and resources of its department and spends little time leading the state, leading the country and having a proactive strategic vision. There is a specific feature of the Federal Council that there is no leader in the sense of a Prime Minister or Head of State. The president is a primus inter pares. When there is a conflict between departments, there is no Prime Minister who can arbitrate. The principle that resides is the principle of consensus.

There is a huge fixity in the number of ministries and departments that exist. As the State faces a transformation, there will be a change in administrative structures not at the Department level, but at the offices that are headed within each Department. Each Department is subdivided into offices. 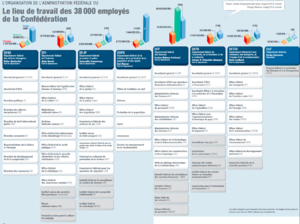 There are few secretariats of State because the people have spoken out against it many times. The Secretary General coordinates vertically as well as Secretariats of State, which have a key role in the Swiss representation abroad and in matters that the Federal Council cannot handle.

The guiding principles of the reforms were whether all offices were in the right Department or whether offices had been established for historical reasons in one location and had to be moved. The question of how to improve the management process in each of these offices was raised.

The 1991 Confederation Leadership Structure Task Force proposes five models of government. A first reform comes with the 1997 Law on the Organisation of Government and Administration. It is a first failure in 1996 with 61% of "no" for a 31% participation. It is a popular refusal of 10 new Secretaries of State. The separation of "administrative reform" and "reform of the state administration" was abandoned in summer 2004 by the Federal Council following a refusal by Parliament to accept the model of a two-circle government (delegated ministers).

The LOGA of 1997 and the OLOGA of 1998 brought some major innovations:

The challenge is to know the connection between tasks. 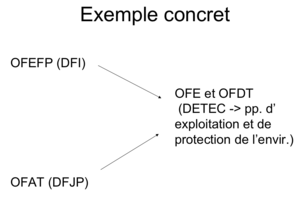 For example, the state builds roads and at the same time, the state protects the environment. When we build roads, we have to wonder about the environmental impact of this type of infrastructure. These two offices have been merged within the same Department to facilitate negotiations. It makes sense to bring these two offices together in one department. These great manoeuvres never came to fruition. 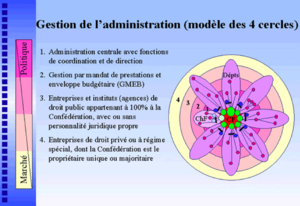 This is the result of a policy to stop recruiting public servants. The same phenomenon can be observed with the liberalization of certain sectors. The number of employees in public enterprises was much larger than in the administration itself. For public companies, there has been an increase, but a reduction since the 2000s.

Another way to measure the quota and measure the share of public employment. There has been a reduction in the number of civil servants as well as a reduction in the number of employees of public enterprises. Certain services that contribute to a State's social and territorial economic cohesion are still considered to be of public utility. For example, Swisscom fulfils a public service mandate. It can be said that Swisscom employees functionally establish the same mission as a public servant. 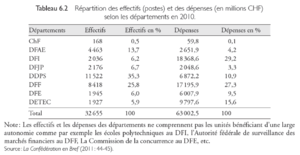 From the point of view of ministerial administration in terms of percentage, the Departments that still have by far the most civil servants is the army. More than one in three public servants and guarantor of Swiss neutrality. The Departments are very different in terms of staffing levels and the number of staff working in them. 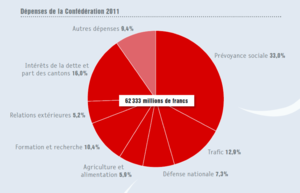 In terms of social welfare, between 2001 and 2011 there have been significant increases in the budgets allocated, as with social welfare, but also in training and research. By contrast, the defence budget is shrinking.

This table provides an even longer perspective comparing data between 1950 and 2010 to compare the given public policies. This raises questions about the evolution of administrative structures to keep pace with changes in public policy. 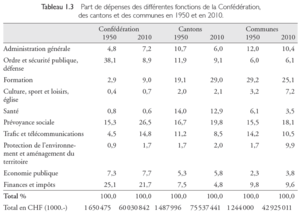 What are the criteria for organizing the federal administration?[modifier | modifier le wikicode]

We need to ask ourselves questions about perspectives, expenditure and administrative management methods. The Federal Council has very few constraints.

Section 42 of the OLGA states that care must be taken to maintain a balance between the seven federal councillors, namely, a material and political balance, a commonality of duties and management imperatives. Functional consolidation allows for the optimization of public policies. This functional grouping is not complete. The governability of the Departments questions the ability to manage the Departments.

In order to measure the governmentality of the Departments, it is necessary to look at the services directly subordinate to the heads of Departments. This is also called "span of control". The number of people is different, the means are different and the capacities of governmentality are different. This raises structural questions for an ideal governance of the public service.

Apart from the federal administration, which may include public service enterprises, there is a militia administration. Delegated to extra-parliamentary committees and para-State implementing bodies. Theoretically, it is not civil servants but representatives of political authorities, but also representatives of interest groups who are lobbyists who will assume the functions of the administration by formulating legislative proposals or acting as an appeal body against imposed decisions.

A distinction is made between advisory committees and decision-making committees. No department deprives itself of this administration of militia through commissions. The Federal Department of Home Affairs makes the greatest use of these commissions.

The number of such commissions is again on the rise following a decline in the 1990s.

There are problems with these extra-parliamentary committees:

The problems of the para-State implementing bodies reveal another hidden side of the iceberg that intervenes in the implementation of parliamentary policies. In 1979 there were 189 organs, 11,000 people and 730 million federal subsidies. This includes private organizations that perform public service tasks when applying the laws. Professional organisations, producers' associations and inter-professional associations will, for example, manage agricultural policy or vocational training policy. Issues raised include representativeness, role, effectiveness and cost.

The four main messages are that the quota share is low, there is an imbalance in the federal departments. In the legislative formulation phase, there is a central role played by parliamentary committees and in the downstream decision-making process, there are parastatal organisations, often professional, which are responsible for implementing the laws that make the Swiss administrative phenomenon very multifaceted.