We will see how Weber thought about the structure and now how we see the structure in the light of Weberian light and according to the contributions of Crozier and psychosociological criticism. There are different types of administrative structures and organizations. We will try to see what their limitations and benefits are. The first two types can be described as ideal-typical or building blocks that will be used in the other three types. 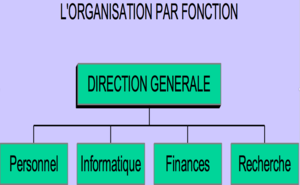 Two main ideas govern this type of organization: the idea of specialization[1], people need to concentrate on a task they master, and the idea of strict hierarchy[2] with a very centralized and pyramid-like view of the organization of public administration. Coordination between departments is done through hierarchical channels. The Directorate-General is responsible for coordinating between the various departments. Very often, it is a mode of organization used for the functional services of public administration:

The organization by function is often found where functional services are found, but it is possible to imagine a public service organized solely by function with specialties that exercise competence in matters of concern to it. It is a model that is quite similar to the idea of a Weberian "steel cage" with specialized people, hierarchies and coordination through the summit.

Through this model, there is an attempt to deny the political responsibilities of public administration. Only one actor with a political function is the Directorate-General. The three political roles as presented by Bezes are not taken into account. It is a component found in almost all jurisdictions. 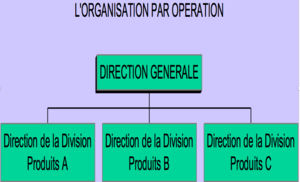 A hierarchy remains unique, but below it, there is not more functional service, but on the contrary divisional directorates from which there will be much more autonomy given to managers through operational divisions. The executive management will define broad strategic objectives and within the division, the broad strategic objectives will be translated into more rational objectives. Political power is not confiscated by the Directorate-General, but can also be exercised at the level of the operational division, which can be articulated in four different ways:

The main difference with the organization by function is that there is a given autonomy at the divisional level.

What solutions are being discussed to get out of each of these two types of organization and to reconcile and combine the benefits? How can the advantages of hierarchy be combined with the advantages of autonomy, specialization and a global vision? How can we promote equal treatment by ensuring that public administration is not captured by vested interests in a context where cost and efficiency control is important? We are in a context where the emphasis on effectiveness and efficiency is dominant. Solutions have been proposed to meet this challenge. 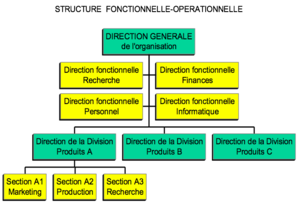 It is a type of organization that we find regularly, it is the most frequent. The idea is to say that we are going to introduce central agencies into the public administration that will be in charge of so-called "functional" services. One centralized unit will deal with human resources management, another unit will deal with information, etc. managing all the crosscutting elements found in all departments of the public administration.

Central services also called "staff agencies" will help to provide the necessary support so that people who are closer to the field and can perform their duties. These are services which will ensure cooperation between services which will also be more operational. Staff agencies make sure that the different divisions pull well together, that there is no conflict and that they follow the same objectives. Two functions are important: providing central and necessary services[1] and avoiding operational duplication[2]. A third function is that of "adviser to the Prince"[3], adviser to the General Administration. There will also be a business planning function[4]. These functions have been assigned within the framework of this structure assigned to the staff agencies.

The operational level is responsible for delivering benefits and is responsible for the day-to-day running of the public service. Staff agencies have a "back office" role and those in the field are the line agencies, i. e. those who are in contact with the public. The risk is that everything at the operational division level will be designed according to the business unit model.

This structure can have drawbacks and limitations in the way public administration structures are managed. Political power is largely reserved for staff management and line agencies. We are in an implementation where operational autonomy is highly regulated.

The idea is to say that we are not going to put a hierarchical link between staff agencies and line agencies, we are putting them on the same level. We will create an organizational matrix, at each intersection, this will give rise to collaborations between the departments concerned. The important point is that there is no hierarchy between the departments that collaborate at the intersection of a row and a column. We are trying to remove the question of hierarchy, which was the problem in the functional and operational organization. The matrix structure offers a less hierarchical organization by interlinking services.

The benefits are largely derived from the idea of promoting the idea of autonomy and decompartmentalization of public administration. Disadvantages arise from the same source as advantages.

This model was put forward by two Swiss authors Thom and Ritz in Public Management: innovative Konzepte zur Führung im öffentlichen Sektor, published in 2006, who are trying to find a refined and elaborate mode to answer the previous questions. We are entering a model that is complicated. The idea is to find an organization chart that addresses all of the combined problems in order to exploit their advantages and eliminate their disadvantages. This model has inspired a number of reforms in the Swiss federal administration.

Beyond the functional, operational, functional-operational or matrix organization: Thom and Ritz will talk about the organization by process. Public administration must be reformed to concentrate forces by identifying central processes (Kernprozesse). Central processes are chains of activities that result from the choices, objectives and strategic missions of the administration. On the other hand, they take into account all the players involved (from upstream suppliers to downstream customers) and define and delineate the clear responsibilities of each actor in the chain.

Management by objective is an idea taken over from management. In The Practice of Management published in 1954, Drucker shows that process organisation will integrate the idea of objective organisation. Organizational management will be organized around the allocation of objectives by providing (quantified) targets to be achieved, by giving employees the opportunity to contribute to the definition of objectives, and by evaluating the results in relation to the objectives set. The idea of organization by process has strong similarities with the idea of direction by objectives. This means giving more operational autonomy to people on the ground.

Steps to follow for an organization by process: Thom and Ritz[modifier | modifier le wikicode]

Three steps must be followed in order to find the most appropriate solution to the problems identified. 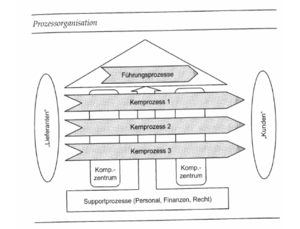 Clients may be internal to government, but most of the time they are external clients. When trying to define administrative processes, three types of processes should be defined: 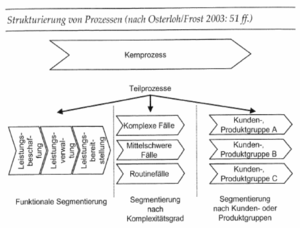 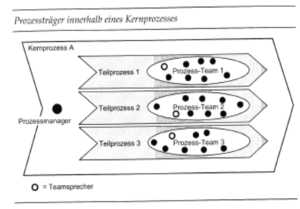 There are two central characteristics: proximity to the customer [1] and wide margin of manoeuvre [2]. The diagram describes how the partial processes should be organized. For each of the sub-processes, the idea is to set up teams that will make it possible to achieve the desired objectives as well as possible. What becomes important at the sub-process level is no longer the structure, no longer the organizational chart, but the people and people who must be available to cooperate, versatile, ready to share with others and in teams, there is no hierarchy that can be put in place. There will be a team manager, but not a hierarchy per se. There is the "job enlargement" because we broaden the skills and missions and the "enrichment job" is the fact of giving people decision making skills in the team concerned, and the "self-control", these people would be motivated and will necessarily act and give the best of themselves to achieve these objectives.