Conclusion of examples: Reality is complex and often counter-intuitive.

A distinction can be made between methodology and technique:

There are four aspects of self-monitoring research to determine the context in which research is conducted.

Research develops within a broader framework, it is not outside influences, there are fields of influence, constraints, fields..:

There are four sources of constraints on practice.

The introduction to the methodology is a course of research practice, it is influenced by different elements: social demand, opinion, what has been done in the field, etc.. There are internal requirements that researchers must be aware of.

1) Epistemological cluster: everything related to the foundations of scientific knowledge, conditions of validity of research. This pole exercises critical vigilance in research. It is the guarantor of the objectification of the scientific object, of the explanation of scientific problems. He decides the rules, the explanations of facts and criticizes these rules. This is all about the conditions of knowledge production.

Hypothetico-deductive logic is a logic of research, a way of approaching social and political reality. It is making assumptions, reflecting on what can explain areas, and through data collection proving a theory. Inductive logic is starting from the facts to go to the general.

2) Theoretical cluster: this pole refers to the methodology in the broad sense, we seek to characterize the approaches in which we fit. It's about contextualization, hypothesis formulation, satisfaction, finding a job, the role of religion, etc. You need a theory. There are theoretical reference frameworks that guide research (positivist, functionalism, structuralism, etc.), we will see the positivist approach and the comprehensive approach. This is the place for scientific formulation, and it is linked to the frame of reference.

3) Morphological cluster: there is a formal aspect to the research, which may mean that depending on the approach you choose, you are interested in the systems in various ways. These are the rules of structuring and forming the object, it imposes a certain order to the various elements. There are certain steps that will be followed. According to the perspective chosen for this structuring and more or less strict framework, there is a research requirement concerning form. For example, the difference between quantitative and qualitative approaches.

4) Technical cluster: it is all the methods, analyses of the data, collects data, it is the place of control of the data, which confronts them with the theory which gave rise to them. Mode of investigation". Comparative studies, etc. (the instruments I will analyze). 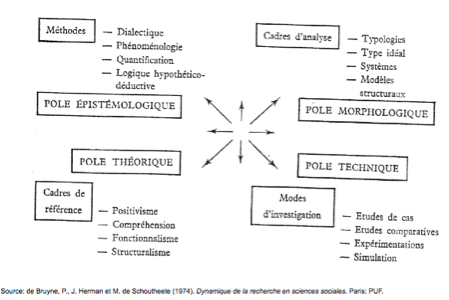 This idea corresponds to a topological model of research, that is, it is not a chronological perspective mode. At any given moment, there are these four aspects. However, the weight of each pole may vary.

The previous approach is topological, not chronological, at all times there are these four requirements to consider. But there is also a more pragmatic and chronological approach to research:

The steps in the process[modifier | modifier le wikicode] 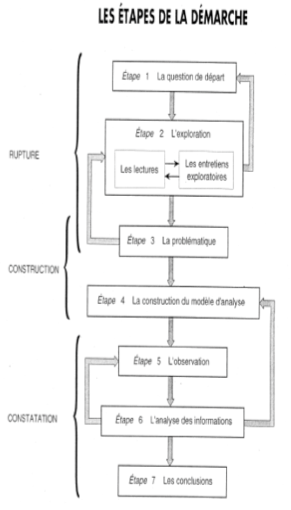 The steps of the process:

These two phases help to formulate a problem

Nota bene: this chronology is not unidirectional. For example, the formulation of the problem may highlight shortcomings and prompt new research to refine it.