Unlike domestic law, where power ensures the authority of legal rules, international law is based on the willingness of the sovereign State to recognize these norms of international law. However, since the end of the 20th century, we have seen the development of bodies with real coercive means that undermine the sovereignty of Member States. But this evolution remains very fragile.

The objective of the 1815 Vienna Congress is to restore peace in Europe after the fall of the Napoleonic Empire. It will establish ongoing and regular cooperation between the major powers that must maintain peace on the continent. The pillars of the "European concert" are the great powers of the time, namely Great Britain, Prussia, Russia, France and Austria.

This European consultation is an important step in the development of positive international law. The European concert will adopt international rules that will lead, for example, to the abolition of the slave trade or a special status for diplomatic agents.

With regard to Switzerland, the European Council recognises its borders, but also, and above all, its perpetual neutrality.

This congress established an international collaboration. It developed throughout the 19th and 20th centuries. The Industrial and Communications Revolution will obviously intensify human relations in all areas that have repercussions in the field of international relations.

International law will no longer develop only on the basis of bilateral agreements, but also multilaterally, giving rise to rules of international law. In addition, many new States are emerging.

Henri Dunant (1828 - 1910), a Genevan by birth, was in Italy in 1859. As a businessman, he sought to meet Napoleon III in northern Italy then in campaign to support his ally the King of Piedmont Sardinia who wanted to unify Italy. This campaign is also an opposition against the Habsburgs.

On June 24, 1859, Henri Dunant was in Solferino where the Austrians were defeated by French and Italian forces. He is the privileged witness of the suffering caused to the soldiers (40,000 victims). For three days and three nights, he participated in the rescue of the soldiers. The new weapons increase the severity of injuries.

In 1862, he published a book recounting this experience: A Memory of Solferino. He made two suggestions to alleviate the horrors of war. The first is to organize voluntary relief societies whose objective is to help the wounded with the agreement of their government. The idea is to integrate them into military health services. Assistance to these injured would be provided without distinction of nationality. He also proposes to convene an international congress in Geneva to give the agreement of States on this project.

It was Gustave Moynier (1826 - 1910), a lawyer, who structured Henri Dunant's ideas. To this end, it will set up a drafting committee under the direction of General Dufour. This committee constituted the first International Committee of the Red Cross on February 17, 1863.

The committee is convening an international congress to discuss ways to address health service gaps. In 1863, this meeting brought together government committees and experts who adopted a charter on 29 October 1863 that included the fundamental foundations of the Red Cross:

In August 1864, the Federal Council was urged by the committee to invite the States of Europe, the United States, Brazil and Mexico to adopt the resolutions adopted by Congress the previous year. This conference became the International Conference for the Neutralization of Military Service in the Field by adopting the Geneva Convention to improve the lot of wounded soldiers. It was first applied in 1866 during the Austro-Prussian war. It was really in 1885, during the Serbo-Bulgarian war, that the 1864 Geneva Convention was applied for the first time by both sides to the conflict.

According to the definition of humanitarian law, the Geneva Convention is the set of international rules designed to improve the lot of wounded soldiers.

The innovative aspect of these rules of law is that for the first time we are faced with permanent written standards of universal scope that protect victims of conflict. This multilateral treaty is open to ratification by all States, and these international standards provide for:

These various treaties are the source of international humanitarian law.

The League of Nations[edit | edit source] 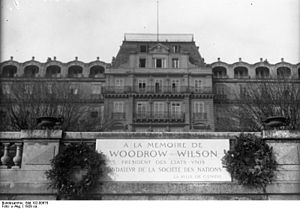 The Palais Wilson in Geneva in 1928, the first headquarters of the League of Nations.

The objective of establishing collective security requires the limitation of war, disarmament and the peaceful settlement of conflicts as well as sanctions against States aggressing another State. After the First World War, international public opinion was enthusiastic about trying the experiment to put an end to the state of war.

The Covenant of the League of Nations establishes three bodies:

The pact introduced the "unanimity rule" for decisions taken by the Council and the Assembly, with the exception of procedural matters. It organizes peoples on a new basis, but it has never questioned the sovereignty of States.

Each state, large or small, had a "veto" that could paralyze the functioning of this institution.

The main thing was not to impose a veto, but to find compromises so that balanced decisions could be taken unanimously. But the advent of totalitarianism in Europe will defeat the idea of consultation.

In November 1919, the United States, following a vote in the Senate, refused to participate in the League of Nations because of the principle of universalism.

The principle of the League of Nations remains the promotion of international justice and international law. The participants undertake to maintain the territorial integrity and independence of any State. Article 16 specifies that a State which resorts to war contrary to its commitments is immediately recognized as declaring war on all members of the League of Nations.

« 1. If a Clearing Member uses war, contrary to the commitments made in Articles 12, 13 or 15, it is ipso facto considered to have committed an act of war against all other Clearing Members. They undertake to immediately terminate all commercial or financial relations with the Company, to prohibit all relations between their nationals and those of the State in breach of the agreement and to put an end to all financial, commercial or personal communications between the nationals of that State and those of any other State, member or not of the Company.

2. In this case, the Council has the duty to recommend to the various governments concerned the military, naval or air personnel by which the members of the Society will respectively contribute to the armed forces intended to enforce the Society's commitments.

3. The Clearing Members further agree to provide mutual support to each other in the application of the economic and financial measures to be taken under this Article to minimize losses and inconveniences that may result therefrom. They also lend each other mutual support to resist any special measure directed against one of them by the State in breach of the pact. They shall take the necessary steps to facilitate the passage through their territory of the forces of any member of the Corporation who participates in a joint action to enforce the Corporation's commitments.

4. Any member who has been found guilty of breaching any of the commitments resulting from the agreement may be excluded from the Corporation. Exclusion is pronounced by the vote of all other members of the Company represented on the Board. »

As a result, some sanctions are automatic: disruption of trade and economic relations; and military measures may be recommended.

However, the mechanism of the principle of collective security, provided for in the League of Nations pact to guarantee the territorial integrity and independence of all its members, involves the use of everyone's weapons to defend the person under attack and repel the aggressor. But the system would freeze in the 1930s.

After the aggressions of Japan against Manchuria in 1931, Italy against Abyssinia in 1935, Germany against Austria in 1938, Czechoslovakia and Poland in 1939, the League of Nations no longer has any credibility.

Its Member States did not want to apply the principle of the pact with complete impunity.

The International Labour Organization is a successful and sustainable element of the League of Nations. Another example is the International Court of Justice, established in 1922, which still promotes the peaceful settlement of disputes today and still has its headquarters in The Hague.