The distinction between public and private law[modifier | modifier le wikicode]

Constitutional law is the set of legal rules relating to institutions through which authority is established, transmitted or exercised in the State. The epithet "constitutional" comes from the fact that the fundamental rules of this right are contained in a special document: the Constitution.

The classic theory of the state recognizes three powers:

The notion of separation of powers means that each power works in relative independence. It is the framework of the State, the right superior to all.

Administrative law is the body of law that governs the day-to-day management of public affairs by administrative bodies.

Several branches can be distinguished:

Criminal law is the body of law that organizes, by means of penalties, the repression of violations of social order.

Criminal law is essential to the life of the group and its future, which is why it already appears in so-called "primitive" societies. It will develop in two aspects:

For this reason, for a long time criminal law was subject to the archaic concept of revenge, which brought it closer to private law

"Faide "/ "Faida" is a primitive system of criminal law in which the victim of the damage has the right to cause the author or the family of the damage another damage unless there is the intervention of a financial composition and the offender waives his right of revenge.

The pecuniary composition is a compensation with the objective of compensation that replaces private revenge. This composition comes from the Christian influence which takes the form of transactions whose purpose is to compensate.

It is only belatedly that the State acquires the monopoly of legitimate violence and becomes strong enough to impose its own sanctions, and therefore criminal repression.

The popular imagination is immediately linked to criminal law, also known as "criminal law". This comes from the decorum of criminal justice such as the staging of death (guillotine called "the great widow"), the rites and ways of judgment. However, criminal law cases remain a minority.

The implementation of repression against offences is a matter for the State monopoly. The prohibition of private revenge will only be accepted by society if and to the extent that repression by the State is ensured.

Its task is to ensure peace and security by suppressing the breach. The rules that determine the conditions of repression are found in the Criminal Code: they are a set of legal rules relating to criminal repression.

It is the state itself as the protector of the individual and society that prosecutes the punishment of criminals. It has links with private law because it protects the individual.

There are two types of criminal law: 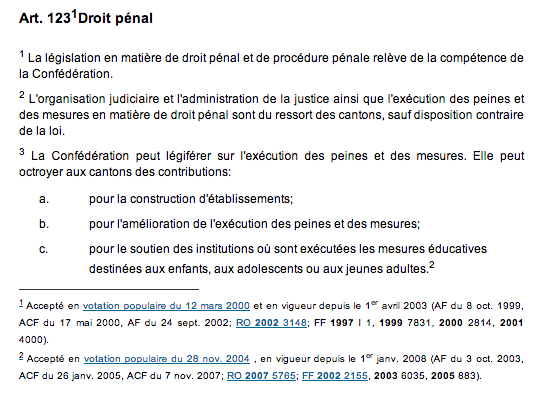 Procedural law refers to "all the rules governing the organisation and activity of the courts [1] which apply the law".

This law determines the organisation of the courts, determines the form and rules according to which the competent court must judge disputes [2]. Private judicial proceedings are the necessary complement to private law. It is the law that prescribes the way to act.

There are three types of procedures that are primarily intended to define the different organs of justice:

This procedure is related to private law, but if it belongs to public law it is because of the relationships it establishes between the State and the individual, because the State protects the individual.

They determine both the organisation and the jurisdiction of these various courts; they establish the conduct of the trial, i.e. in what forms and under what rules the competent court must judge the disputes submitted to it.

Criminal and civil proceedings are governed by federal law and therefore fall within the jurisdiction of the Confederation.

Civil law has long been confused with private law. Civil law comes from Roman ius civil law, i. e. the law that applies to relationships between individuals. In French, the term "civil" has long been used as a synonym of private law. Since then, many distinctions have been made between the rules:

Civil law is the fundamental part of private law, including rules relating to persons, family, property and obligations.

It applies indiscriminately to all individuals and depends on the competence of the confederation. It determines the essential consequences of the individual's main facts and actions as well as their legal situation:

Commercial law or business law is the fundamental part of private law that contains all the rules of law that apply to commercial relationships.

There are three categories:

It can be defined:

This branch has existed since antiquity, because there is a community of interest between States that allows conflicts to be resolved by means other than force.

In a State, there is an established power that sanctions the rules of law. However, there is no fundamental obligation that obliges a State to adopt rules of law.

There are rules of international law only to the extent that sovereign States recognize them.