The origins of fundamental rights do not date back to the 18th century.

As the United States of America broke off relations with its sovereign King George III and declared independence on July 4, 1776, the Thirteen American colonies under English sovereignty became sovereign states in a confederal state structure.

In 1787, the American states adopted a federal constitution influenced by the Virginia Declaration on the first amendments. 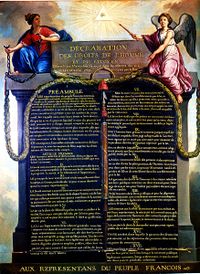 In 1789, France was in a "state of crisis" where there were many "coups d'état". An assembly proclaims itself, it is a constituent body, and it is it that will draft the Declaration of the Rights of Man and of the Citizen in August 1789.

The objective is to have clear ideas about what human rights are. It is influenced by the Virginia Declaration, which is why it includes the freedoms mentioned in it.

Art 1. Men are born and remain free and equal in rights. Social distinctions can only be based on common utility.

Art 2. The purpose of any political association is to preserve natural and imprescriptible human rights. These rights are freedom, property, security, and resistance to oppression.

Art 4. Freedom consists in being able to do everything that does not harm others: thus the exercise of each person's natural rights has no limits other than those that ensure the enjoyment of these same rights by other members of society. These limits can only be determined by law.

Art 6. The law is the expression of the general will. All citizens have the right to participate personally, or through their representatives, in its training. It must be the same for everyone, either to protect or to punish. All citizens, being equal in his eyes, are equally eligible for all public dignities, places and jobs, according to their capacity, and without any distinction other than that of their virtues and talents.

Art 7. No man may be charged, arrested or detained except in cases determined by law and in the manner prescribed by it. Those who solicit, expedite, execute or have arbitrary orders executed must be punished; but any citizen called or seized under the law must obey at once: he is guilty by resistance.

Art 11. The free communication of thoughts and opinions is one of the most precious human rights: every citizen can therefore speak, write and print freely, except to answer for the abuse of this freedom, in cases determined by law.

Art 17. Since property is an inviolable and sacred right, no one can be deprived of it, except when public necessity, as legally established, obviously requires it, and under the condition of fair and prior compensation.

It talks about fundamental rights:

A parliamentary or even direct type of parliamentary democracy is therefore being developed. However, the 1789 Declaration does not have any social rights. Social rights only appeared at the end of the 19th century, all he was asked to do was refrain from going against freedoms.

The popularity of the 1789 Declaration lies in this text's scope, making it original and universal. It was written in one week to provide an understanding of what fundamental rights were to guide the constitutional work that would be carried out. It will very quickly acquire such popularity that it will not be retouched with an almost sacred scope.

This declaration is intended to apply to all humanity and not only to the French. The whole declaration is articulated around the man and the citizen.

On the other hand, the brevity of the declaration is explained by a concern for universalism. We limit ourselves to expressing major principles that are accepted by all.

It is aimed above all at the individual man, claiming from the State the freedom to be or to act involving an obligation on the part of the State not to act. Individualism is also reflected in the importance given to property rights. This right of ownership does not impose any obligation on the company.

These two elements will make this statement extremely popular.