Globalization would have an "imperial" or even "imperialist" vision for Marxists. Alterglobalization movements mobilize individuals through transnational networks through another globalization. Around the issue of globalization, there are political issues about the type of society. We will come back to the main theses on their relevance and on their analysis of the power issues surrounding globalization.

The imperial reason and its denunciation[modifier | modifier le wikicode]

How do power relations or "imperialist" wills circulate? How is this power imposed or not imposed? How does it circulate? 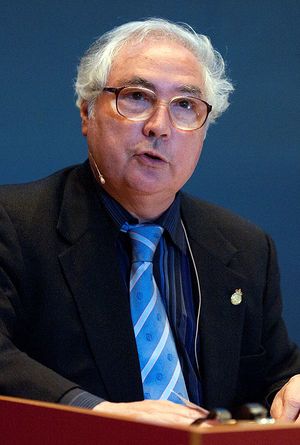 In The Information Age: Economy, Society and Culture[9]

published in three volumes, which is a bible of alterglobalism on the globalization of networks and the local, it is shown how the new global society contributes to the creation of a globalized public opinion by the media contributing to accelerate the crisis of nation-states. Through the circulation of information, there is a global awareness of having a political project that is opposed to a global project.

We are witnessing a relocation of politics in favour of international and supranational institutions that are eroding the power of states. We are talking about neomedievalism with a return to local and regional identities directly linked to the erosion of the State. In Empire of Hart and Negri[10],

the dissolution of the State would lead to a kind of empire imposed by the liberal canons of globalization, distancing the elites from local and national issues.

This transition from power to the global level is causing traditional elites to distance themselves from local issues. Some of these elites will either play the global game and lose interest in local problems or get stuck in the local and sometimes even have identity positions. This thesis provides intellectual support for the anti-globalization cause because behind it is the idea that the elites as agents of globalization have betrayed their populations, hence the need to stand up against these elites. This thesis allows for transnational mobilization against elites. Beyond the seductive dimension of these types of approaches, things are a little more ambiguous. This bottom-up approach against cosmopolitan elites is arrogant.

Some community-based NGOs, for example, are funded by the United States Agency for International Development in failing states. It really depends on national strategies. To think that these people will have things in common and work together would simplify reality. In this vulgar alterglobalization vulgate, we endorse a very simplistic image of the elites. In this image, the elites are either sold to globalization or people trapped in identity issues. It is a Manichean contravision of the elites who have to choose between agents of globalization or local champions. This contributes to pitting these two postures against each other as if they were delimiting the political field to this.

This type of approach neglects the specificities of national histories that may explain the local interplay of positions between the State and NGOs. If we are not interested in this, we remain in an asociological approach despite their official attachment to constructivism in the sense that we are not interested in the social positioning and contextualization of these agents and actors in their country of origin; the agents are never located in the national spaces where they acquire family, school and other resources.

Perhaps this unspoken fact, and the distinction between international relations and political science, are being reproduced again. We are often faced with multi-positioned people where investment at the international level will often depend on a national approach. The underlying question is how globalization imposes ideas, but also how we fight them. Thus, there are facts of power in globalization, certain strategies generate power effects and allow certain ideas to circulate.

With neo-institutionalism, we study the international circulation of expertise. With Meyer's thesis entitled World Society and the Nation‐State[11], we are supposed to overcome both the pitfall of interstate alone and the globalization that anticipates the decline of borders. Global standards are necessary because they are based on a common foundation. We are in a desire to try to understand how know-how circulates, but we are in a form of "magic" as to who it passes through and how it spreads.

In Global Rivalries From the Cold War to Iraq[12], Van der Pijl's thesis is interesting, because it has the merit of going beyond the theses of the Harts and Negri on an absorption of the State in favour of an imperial system. He historicizes his argument by saying that at the global level we are in a long history of competition between two models of states that are still in opposition in the international arena. This Marxist-inspired thesis focuses on the issues between the bourgeoisie and the elite. On the one hand, there would be the Anglo-Saxon liberal state, and on the other, the Prussian state. This thesis has something interesting about it, which is that, as if by chance, the countries that have done well in recent decades are the countries that have adopted a Prussian state before transforming themselves into a liberal state. States will be built more recently and become liberal states as part of a more globalized economy such as Brazil or South Korea as part of take-off strategies.

There is the idea that at the global level, there is a struggle between the elites of these two types of states and that the liberal model is in fact winning because it has certain "comparative advantages", but above all historically there have been phenomena that have allowed them to impose themselves. This thesis shows that between the 1929 crisis and the end of the Cold War, the Anglo-Saxon model was not on the rise. At the end of the Cold War, there was a return of neoliberal thinking that would once again take hold at the global level. It is a Marxist reading, but it has the merit of not giving in the globalizing discourses that take globalization as an anhistorical data to put into perspective the liberal counter-revolution of the 1980s. With the 1980s, we witnessed the dismantling of welfare states.

Beyond the "magic" of decoupling, which believes that the international operates independently of the national, "texts travel without their context". A work written in a country, if it is going to be translated and circulated it is not necessarily because it is a superb text. We will realize that there are editorial strategies, the texts do not circulate internationally in a linear way.

Authors have been inspired by this saying that the transfer from one national space to another is accomplished through a series of social operations by importers according to their positions and interests with a selection and reinterpretation-marking. These are symbolic import-export operations which is a term used by Yves Dezalay and Mickael Rask Madsen in Espaces de pouvoirs nationaux, espaces de pouvoirs internationaux : Stratégies cosmopolites et reproduction des hiérarchies sociales[13]. There would be a hegemonic export of domestic struggles.

Therefore, there is a need to analyse the strategies of smugglers according to the positions they occupy in their national spaces. The idea comes into play, which is ultimately quite against the grain of what we read. The fact of seeking expertise abroad would be inseparable from the reproduction of social hierarchies in national spaces on both sides.

Spaces of power and circulation of knowledge[modifier | modifier le wikicode]

This type of approach is inspired by Bourdieuian sociology telling a different story of globalization. They turn political science analyses and promotional as well as prescriptive discourses on globalization back to back as if the global lived autonomously from the state. It is the idea of putting the State back at the centre of the debate while incorporating it into multiscalar interpretation logics because, once again, multi-level studies tend to minimize the importance of national State institutions as if they were bypassed by direct interactions between the local and the local. The importance of international transfers of skills and the movement of experts between national areas must be taken into account. Thus, we should rethink the relations between the national and the international by avoiding a confinement in the state paradigm and by avoiding giving in to the illusions of prescriptive discourses on globalization.

If we seriously study this notion, we realize that we can have another reading of the circulation of knowledge.

In the La mondialisation des guerres de palais[15], Dezalay and Garth try to explain in South America why in the 1970s and 1980s all neoliberal forces imposed themselves. Their argument is based on the principle that we are in two national strategies between which there are import-export logics. In the United States, there are the Chicago Boys who are the defenders of the liberal reforms that we know well today.

In South America, they will be interested mainly in the case of Chile, where there is an aristocracy that has been educated in Europe and is rather close to Christian democracy, but at the same time, Pinochet arrives with new people to impose itself. There will be cross-interests called "homology" between some Americans who have an interest in exporting their ideas to South America and there will be people who will import these ideas because they will allow them to impose themselves at the national level. It is a struggle between elites.

Dezalay goes even further. Ultimately, the issues of the American power fields influence what happens in the rest of the world. In the United States there has been a war between "left" and "right" where those who lost have brought to light a whole series of people who have invaded other places, including lawyers who have invaded arenas such as large international NGOs. There is a development of international NGOs where it is people who in the field of American power find themselves downgraded being connected. If there are power effects at the global level, that's where they are. We are observing something that could be replicated on many levels. With this international brokerage, there is a double national/international game that is equivalent to the hegemony of the multi-positioned North American elites, also known as a "foreign policy establishment".