There are two main theoretical perspectives on socialization in politics. The first is based on the concept of political sociology. The second perspective is that of rational choice.

There are a very large number of definitions, but they all overlap somewhat.

Boudon and Bourricaud define socialization as the different types of learning to which the individual is subjected, particularly at a young age, whether it be linguistic, cognitive, symbolic or normative learning.

Behind these definitions, there is a double perspective with a kind of dichotomization of the field. There are two main approaches in the theories of socialization, namely:

This distinction is also found in the theories of socialisation in politics.

Rush defines political socialization as the process by which individuals in a society become acquired to the political system. For Lacam, it is the set of mechanisms and processes of formation and transformation of individual systems of political representations, opinions and attitudes. Johnston Conover defines it reflecting the paradigm of interaction being political socialization as the learning of values, attitudes and modes of behaviour that help people to "fit" into their political systems, making them "good" citizens.

It is also possible to distinguish two research traditions that refer to the distinction between system and actor, i.e. between the macro-political and the micro-political level.

Systems theory is embedded in the perspective of the system (macro). In this perspective, socialization provides the basis for political stability and system maintenance. Almond and Verba fit into this perspective. What is important here is that socialization in politics is seen as something that enables the maintenance of political systems. Emphasis is placed on primary socialization (in childhood), by parents or during the first phase of schooling. This gives rise to the idea that what is crucial for the political socialization of people is what happens in the early years of life.

The second perspective is that of political learning. We move from a passive subject who is inculcated with norms in one phase of life to an active subject who interacts with several socializing agents and learns. We are in the perspective of the actor with a focus not on the system, but on what the actor can learn and do, what he has learned with this socialization at the level of political behaviour. The question is to what extent this political learning will or will not enable individuals to act politically. It is therefore assumed that political behaviour is the result of learning. Political engagement itself is also a source of socialization. There is no longer the idea of a linear path, but rather of a circularity in which individuals, through their political participation, will constantly learn and relearn. The emphasis here is on secondary socialization, which begins in adolescence and is characterized by a self-definition of self and a choice of social belonging. Social capital must also be seen as a form of socialization from the perspective of political and actor learning.

Characteristics of the process of political socialization[modifier | modifier le wikicode]

The concept of political socialization is historically situated in the early phases of the study of political behavior, particularly in the phases of the emergence of behaviorism with the dominance of the systematic approach. It is from the end of the 1970s that the learning approach gradually became dominant on the basis of criticisms made on certain studies conducted by some American researchers in the approach of the political system.

Until the 1970s, traditionally, the study of political socialization remained basically marked by three fundamental postulates, namely conditioning approaches and system approaches. These postulates are that :

To summarize the characteristics of the process of political socialization, it is possible to say that it is an interactive process that is both unintentional and deliberate, that is to say, it refers to the first paradigm with a part of political socialization given to us by the agents of primary socialization, but also a part related to desired and sought-after political learning. This process has two complementary purposes. There is a purpose linked to the existence of mechanisms for regulating social systems. Socialization or socializations also enable the political system to be strengthened. There is an aspect that ensures the permanence and cohesion of the political or social system, but there is also the purpose related to the individual learning theory which is the idea of saying that the purpose of socialization is to insert individuals into a given system and to enable or explain political participation or behaviour.

In the field of social movements, there are different aspects dealt with. The most studied consequences are the political ones. There are also theories and studies on the wider cultural and social impact. There is also the impact that participation in a social movement can have on people who are involved in a movement as opposed to those who are not, and this is called the biographical impact of social movements.

A whole series of studies have been carried out, particularly in the United States, on a specific population that are the activists of the new left in the United States in the late 1960s and early 1970s. Many studies have been carried out on this population and especially qualitative studies based on panel data, which are data for which individuals are questioned at different points in time, for which an individual's background is traced, unlike cross-sectional data. What the researchers found and the important role of the socialization phase, which consists in the first political commitment. This strong and lasting impact is an experience of engagement.

There were impacts at the level of attitudes, namely on the successive participation of these people, especially those who continued to define themselves in a certain way compared to those who had not committed themselves. Those who considered themselves left-libertarians remained left-libertarians, while other left-libertarians who had not committed themselves to the movement were not necessarily or much less committed. These committed people also remained more active in politics. What is also interesting are the effects on personal life, i.e. life choices, and in particular on what these authors have called "alternative" life choices. In this case, these studies showed that those who had committed to the new-left were more likely to be unmarried compared to those who had not, were more likely to cohabit rather than be married, and were also more likely not to have children or assets later on compared to those who had not committed. There was also an effect on the type of occupation in which these individuals were engaged. What is important is that a body of research has shown the socializing effect of political engagement on political behaviour and political attitudes. There is a commitment to one's own life choices that are made later.

This example reinforces the idea that the paradigm of political learning and may be the one best able to explain the role of socialization.

It's a concept that has become very fashionable in the last fifteen years or so in political science, but it has its roots in sociology. It is also a concept on which there is little consensus, particularly with regard to its definition, conceptualization and use in the study of political behaviour. In the definitions and conceptualization of social capital, there is a distinction between the micro and macro levels.

There is this distinction between a micro-sociological or micro-political approach with social capital as an individual resource that is a type of social capital owned by individuals. Reference can be made to Pierre Bourdieu, who distinguishes several types of capital, including cultural and economic capital, and social capital as well. Different authors conceptualize this concept in different ways.

The main difference between these two definitions is that for someone like Portes, Bourdieu or Coleman, social capital is an individual resource. Alongside all that, there is another type of capital that is related to insertion into social networks. However, for others like Putnam, social capital is more something that characterizes a whole, a system or a unit. It is in this sense that Putnam showed that the regimes of northern Italy were better than those of southern Italy, in particular because of a better civic culture based on a more developed social capital. 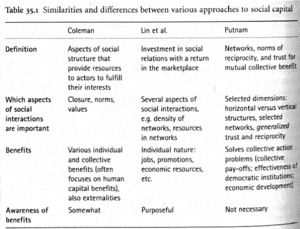 This table refers to three perspectives related to three key authors. Stolle highlights the three similarities and differences of these visions of social capital. Three approaches can be distinguished depending on the definition, which aspects of social interactions are important, what benefits social capital can bring to individuals or systems, and the awareness of benefits on the part of these actors. The importance of reciprocity norms is evident in Putnam's work. Coleman defines the different aspects of the social structure that gives actors different resources to satisfy their interests. For Lin, social capital is seen as investing in social relations with a return on the market.

In either case, the basic idea is that social capital is the result of a set of relationships that one can have with different groups, individuals or institutions. 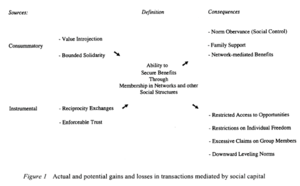 What is important in this schema, from the article Social Capital: its origins and applications in modern sociology published in 1998 by Portes is that it distinguishes the definition, i.e., what social capital is, from its sources, origins and effects, but in a somewhat mixed way.[9] The result is that empirically, it becomes difficult to study.

For Portes, we have to distinguish the definition from these sources. Social capital can come from different things, and we have to distinguish between the definition and the sources of its consequences. There is also a distinction between sources of the expressive type and sources of the instrumental type, i.e., social capital as an end in itself or as resulting from an exchange based on reciprocal interests. It is also necessary to look at what consequences are, as Portes does. According to Portes, the literature has focused only on positive sources.

Social capital has been studied in several contexts to study political behaviour, but there is a subfield or field of study that is particularly interested in Switzerland in the study of the involvement of foreigners or immigrants. Much work is done in this context, in particular and not only, a distinction proposed by Putnam himself is used. This distinction is made between three different types of social capital :

These different types of social capital have different impacts on explaining political participation. 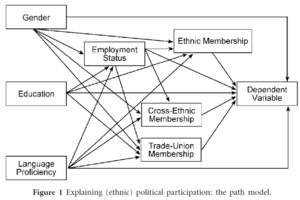 A range of researchers have been interested in trying to explain the political participation of immigrants. It is a path analysis model, also known as causal choice model, in which one wants to explain one or more independent variables. These are researchers who started from Putnam's criticism that capital is essentially a property of the system and that it is the density of associations that gives an indicator of the quality or quantity of social capital that exists in a given society. For these researchers, it's not just that. What is important, especially for explaining political behaviour, is precisely the extent to which this social capital at the systemic level translates into an individual resource that may or may not be owned by the actors. Control variables and social capital variables measured through membership in voluntary associations appear. There is, however, the Putnamian idea that social capital is constituted by membership in associations. There is a distinction between "ethnic-membership" and "cross-ethnic-membership," which Putnam called "bonding" and "bridging. It is an application of this distinction to the study of the impact of immigrants' inclusion in associations on their political participation.

This table summarizes the previous diagram. For the four countries, there are different variables. We can see that in each country ethnic-membership is something that explains participation. Immigrants who are members of associations that provide social capital bounding are more likely to participate than those who are not members.