Aller au contenu
Can a democracy be an empire?

We are going to show that from the American and French revolutions onwards the concept of empire meets the idea of democracy. The question becomes from 1800 - 1815 whether a democracy can also be an empire. We know Tocqueville as the great theorist of democracy, but we look less at some of his writings on the French empire, on the Algerian experience, on the Egyptian expedition. In "De la colonie en Algérie", Tocqueville tries to answer this question.

The response of Constant and Tocqueville[modifier | modifier le wikicode] 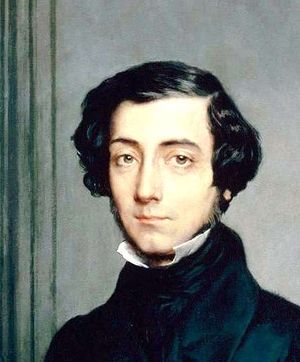 Tocqueville is the philosopher who first asked himself a central question which is not what a democracy is, but whether a democracy can be an empire. Alongside the United States of America, Tocqueville sought to reflect conceptually on this tension.

Tocqueville makes a very clear difference between what he calls domination, which is a technique that consists of putting its inhabitants under its dependence, and colonisation, in which the aim is to occupy and replace the customs of the former inhabitants with the customs of one or more civilised nations. Tocqueville is hostile to domination, but it tolerates colonisation because it is sometimes necessary, especially under certain conditions.

"Work on Algeria". It is the historical argument which is the argument of power. Abandoning Algeria is quite simply for France a synonym of decline, of loss of power. The word that stands out is very clearly that of decline. France needs Algeria for its own power in order to contribute and develop its influence and above all to develop and spread its civilisation. This is somewhere the historical argument for France's role in the world.

The second argument is the argument of necessity:

« What is no less so in my view is that if these positions do not remain in our hands, they will pass into those of another people in Europe. If they are not for us, they will be against us" either because they fall directly under the power of our enemies, or because they fall within the usual circle of their influence. In Africa, we have seen what happened in Egypt, which happens whenever there is contact, even through war, between two races, one of which is enlightened and the other ignorant, one of which rises and the other falls. The great works that we have already done in Algeria, the examples of our arts, our ideas, our power, have powerfully acted on the minds of the very people who fight us with the most ardour and who reject our yoke with the most energy ». If we do not maintain our influence, others will take our place.

The third argument is the argument of civilisation. « In a word, it is obvious to me that, whatever happens, Africa has now entered the movement of the civilised world and will not leave it again ».

Tocqueville continues to defend the French conquest and the benefits of the French conquest. A democracy can be an empire and a democracy must be an empire to keep its influence. « The long war that carried our flags in all parts of the ancient Regency, and showed us the indigenous peoples in all situations and under all circumstances, did not only make us conquer territories, it made us acquire entirely new or more accurate notions about the country and those who lived there. One can only study barbaric peoples with weapons in hand ». It is possible to learn from others, but in a military way.

« We have given and recognised the various elements of which the indigenous population is composed ». Tocqueville believes in cultural diversity. "The history of the different tribes is almost as well known to us as it is to them". Tocqueville maintains that we now have a detailed perception of the indigenous population. « As we get to know the country and the natives better, the usefulness and even the necessity of establishing a European population on African soil becomes more obvious to us. Already, moreover, we no longer have, in this nature, any choice to make or resolution to take. The European population is held. The civilised and Christian society is founded. It is no longer a question of what laws it must live under, and what must be done to hasten its development ». Conquest brings knowledge, civilization, and it must be defended.

« What should be the general spirit of our government towards the indigenous people ». Tocqueville recognises the stakes of conquest, but he reaffirms the need to bring civilisation: « Muslim society in Africa was not uncivilised; it only had a backward and imperfect civilisation ». Tocqueville explains that colonisation is a good thing.

Can democracy be an empire?[modifier | modifier le wikicode] 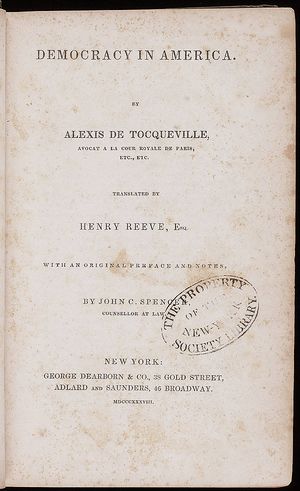 Tocqueville is the great supporter of democracy. « We have just painted two excesses; the majority of your Commission believes that our government must carefully avoid falling into either one. There is no use or duty in leaving our Muslim subjects with exaggerated ideas of their own importance, nor in persuading them that we are obliged to treat them in all circumstances precisely as if they were our fellow citizens and equals. They know that we in Africa have a dominant position; they expect us to maintain it. To leave it today would be to throw astonishment and confusion in their minds, and to fill it with false or dangerous notions. Semi-civilised peoples have a poor understanding of longsuffering and indulgence; all they understand is justice. Exact but rigorous justice must be our only rule of conduct towards the natives when they are guilty towards us. What we owe at all times is good government. We mean, by these words, a power that directs them, not only in our interest, but in theirs; that is truly attentive to their needs; that sincerely seeks the means to provide for them; that is concerned for their welfare, that thinks about their rights; that works hard for the continued development of their imperfect societies; that does not believe it has fulfilled its task when it has obtained their submission and taxation; that governs them, finally, and does not limit itself to exploiting them ».

We see in this passage the immense contradiction demonstrated by Tocqueville, he defends democracy, he defended the need for equal conditions in "Democracy in America" in 1835 and 1840. On the subject of colonisation, he adopts a different discourse, deeply believing in European civilisation's superiority and conceiving that there are barbaric states and civilised states.

He is a distant disciple of Grotius even though Grotius never appears in his writings. He believes that for a democracy to survive on the inside, it has to extend to the outside. Tocqueville defends the central argument that in order to progress, to flourish within a state, a democracy needs to spread outside that state. A democracy needs to be an empire to survive as a democracy. The United States of America will apply this principle to the letter. This is a theoretical question that Tocqueville proposes to reflect on.

These are arguments that are still very topical. The question is whether a democracy can be an empire. Tocqueville will answer "yes" and he will even answer that sometimes a democracy must be an empire.