Emergence of the study of political behaviour[modifier | modifier le wikicode]

The development of a scientific discipline also stems from and inherits broader transformations in the history of mentalities and even in the culture of a given continent or country. All these elements that have placed the individual at the centre have been translated into the emergence in the 20th century of an approach that was dominant and born in the United States from the 1920s and 1930s and which saw its rise in the 1940s, namely behaviourism. It is a term used in several different disciplines, particularly in psychology, and is not necessarily very close to behaviorism as known in political science.

It was in reaction to this political science that behaviourists launched this movement, which has had an enormous influence, particularly on the analysis of political behaviour.

The characteristics of behaviourism are still found today in the analysis of political behaviour. It is a matter of explaining behaviour on the basis of causal hypotheses with the idea of explaining something by describing the behaviour meaning that one wants to test these hypotheses by testing them empirically. This is a crucial point because the old institutionalism was not interested in the empirical dimension, it did not rely on empirical evidence. For behaviourists, it is a matter of explaining the behaviour of individuals through causal hypotheses and testing them empirically. From this, certain methodological instruments are derived, including the survey instrument.

At the same time, behaviourists had the ambition to try to develop general models and theories. These were not obviously laws as in 19th century sociology, which wanted to establish universal laws. From now on, we are trying to understand why a population behaves in such a way or to develop theories that can be adapted to different contexts.

Some theories of the explanatory model of voting are largely based on rational choice theory. It is a theory that applies to different areas in a cross-cutting manner.

Among the characteristics of rational choice theory, we must first distinguish methodological individualism, which in some sociological debates is opposed to sociological holism. In this sense, the explanation of social phenomena has to be made in terms of rational calculations made by self-centred individuals thinking according to their own interests. The second element derives from the first is that interactions are made on the basis of social exchange modelled on economic action, i.e. exchanges are made on the cost-benefit model that actors make. Rational choice theory has influenced not only the study of voting, but also the theory of social movements. In rational choice theories, rationality is seen as the result of psychological conditioning or individuals acting as if they were completely rational.

What brings these two approaches together is a strong preoccupation with theory and methodology, at least in terms of ambition, with a desire to eliminate any normative element from the reflection and study of any political behaviour. The aim is not to judge good behaviour, but to observe and explain it. Methodological individualism is that the basic unit must be the individual shared by these two approaches, which also emphasize inputs by analyzing behaviours and the inputs that result from them.

From the 1980s and 1990s, there was a return of institutions in the analysis of behaviours through a new institutionalism that distanced itself from the old institutionalism in particular by evacuating the normative dimension, by an emphasis that is placed not only on the legal framework, but also on informal procedures that constitute a context that can determine or channel political behaviour.

The rationalist rather than behaviourist revolution has given rise to the idea that the citizen has a decision-making power that also gives rise to the figure of the rational voter, to the point where any decision to behave politically is the result of a rational choice, i.e. an evolution of the costs and benefits that the actor himself would have in one case rather than another. The idea of the rational voter, which has taken the assumptions of rational choice theory to the extreme, has been criticized both from within and without. From the inside, since there are rationalist writers who have set certain limits to rationality, and from the outside, since there have been a lot of criticisms that are the usual criticisms of rational choice theory, and if you go in that direction, you neglect the impact of structures, contexts, or cultural dimensions.

The internal criticism is interesting because it led to the concept of limited rationality, which was created to show the fact that the actor can act rationally, but within a certain context that sets limits within which rationality can function. The concept of limited rationality has been taken up by authors who have proposed the concept of reasoning vote which is a voter who thinks within a given context. It also presupposes that the voter assesses the costs and benefits in a situation where information is not completely transparent and available.

The idea of reasoning voting is a concept that tries to bridge the gap between political psychology and rational choice theory by taking into account psychological factors that may make the voter not rational but still reasonable. The voter is led to take shortcuts that are heuristic processes.

If we go back to the old institutionalism, in the end we were not interested in empirical concerns. The first beginnings of empirical analysis, and therefore of methodological reflection understood as an instrument and a set of tools that allow us to make a link between theoretical thought and empirical reality, took place at the beginning of the 20th century, shortly before the development of behaviorism in the United States, and in France with electoral geography, which worked on aggregate data that are data that characterize a given political-administrative unit. Behaviourists immediately saw that with this type of approach and this type of data, we cannot study individual behaviour, since the data are at the level of a unit and not at the level of the individual. For behaviourists, it is necessary to find a way to study individual behaviour by collecting individual data, which is why they developed the sample survey, which is still an instrument used today. The survey is based on random sampling that can be generalised and is representative. Paul Lazarsfeld, in the 1940s, first applied the sampling instrument to study electoral behaviour. We're going to talk about the Michigan approach, and it was precisely at the University of Michigan that the first systematic national surveys were developed beginning in the 1950s. Starting in 1978, they established national electoral studies that were institutionalized and developed in other countries. It is a valuable tool to study political behaviour from a perspective that was once called micropolitics. From the 1980s onwards, it is possible to point out important innovations with the systematic use of computers, which increased the possibilities of analysis, but also with the social organization of access to data. The idea is that, at certain times, it is possible to ensure that all researchers have access to the data. This responds to a concern for science as a collective effort, but it also responds to a methodological concern for the replicability of research results. Finally, the increasing sophistication of analytical techniques has led to the possibility of multi-level analyses, which have existed since the late 1970s and early 1980s, but in political science this is a relatively recent development. These are analyses that can integrate both individual and contextual data.

Several levels are taken into account in the analysis of political behaviour, with "micro" analyses, i.e. individual analyses, which will be our dependent variable for a large part of the course, and "macro" analyses such as, for example, the fact that electoral participation depends on the institutional context and intervenes in the explanation, which are factors that do not depend on the individual, but which are either the aggregation of individual behaviours that we look at in an aggregated way or properties that depend directly on the context.

The big question is how to link them beyond the fact that today there are statistical methodological tools that allow individual and contextual measures to be linked in a single analysis. This reflection is at the heart of thinking in social science and in any case in sociology and political science. Sociological theorists have often been concerned with how to link the individual level to the macro institutional level in other cases.

James Coleman has developed a very simple model of how macro and micro are linked. In the micro-macro linkage model, what we want to explain is political and social change. The sociologist's task is to explain major social and political changes. These changes, in turn, are the result of major structural and cultural transformations. There is the idea of a link between what we want to explain, namely political and social changes today, and the major transformations that have taken place in the history of Europe or of a country. 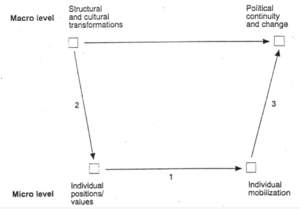 For Coleman, who was a great methodological institutionist, the link between major social, structural and cultural transformations and political and social change cannot be made directly, but can only be made through individual choices and behaviour. This is an approach that comes from Max Weber. The idea is that these cultural transformations then explain changes in individual positions and attitudes. These individual preferences then explain individual mobilization, and it is through the aggregation of different individual behaviors that we can ultimately explain cultural and social changes. The whole behaviourist tradition has remained at the micro level, but for Coleman, a link must be made with the macro political level. For Coleman, this link cannot be made directly, but through a detour. Social and political change cannot be explained by staying at the level of context, aggregate and global variables. The Weberian idea is that in order to explain social change, one has to go through individual variables that provide mechanisms.

It must be kept in mind that there is the micro and macro level that must be distinguished and that we must try to make a link between these levels.

Ecological error is a mistake that is made when drawing conclusions that concern the individual level from aggregate data that concern the macro level. It is a mistake that one makes when one wants to explain individual behaviour when one has only aggregate data. An example of an ecological error would be to say that if we observe a correlation, if there is an association between a proportion of Catholics in a Swiss canton and the proportion of votes for DCP, then from there we cannot conclude that religious values drive people to vote for DCP. There may very well be Catholic voters who do not vote for the CDP. You simply conclude by a correlation, you don't see it.

In this example, there are three cities. The hypothesis is that income pushes people to vote more to the right.

If we look at the individual levels, the correlation could be -.33, it's a weak and negative correlation. This result is arrived at by looking within each city for which individuals voted.

Let's see who the voters voted for.