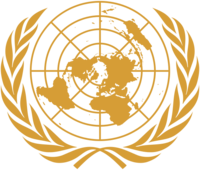 Emblem of the United Nations.

It was developed in the United States just before the end of the war. The Charter of the United Nations was signed in San Francisco on June 26, 1945 by the free nations at war with the Axis powers.

Today, it has more than 196 members, including Switzerland.

Since the end of the war, Switzerland has had an observer seat. It was only in 2002, after the people and the cantons had accepted its accession, that it became a permanent member. Membership was first refused in 1986 in the midst of a period of confrontation between the Soviet and Western blocs.

The Charter of the United Nations has an objective of peacekeeping and international cooperation. Its headquarters are in New York. However, the European headquarters is maintained in Geneva.

Article 93 provides that States that are not members of the United Nations may join the International Court of Justice. This was the case in Switzerland in 1948.