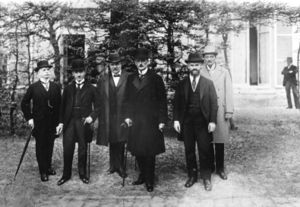 The experience of democracy that has lasted just over ten years is characterized by strong social tensions and political instability. What interests us is to understand this seizure of power by the Nazis in a peaceful manner and the advent of the regime of the Third Reich, since Hitler would soon suspend the individual and political freedoms that would lead to the extermination of the Jews as well as the Second World War.

It is a pivotal moment that in its inability to form stable governments has contributed to Hitler's legitimacy, agenda and folly.

We will study this theme in the form of a great question and a causal form. Institutionalists question "big questions", as for the theory of rational choice, it chooses its object according to rigorous methodological approaches.

From a Marxist perspective, one refuses to identify causal relations since this methodology approaches the world through a historical dialectic where any factor can influence a result that affects at the same time the primary variable.

The question is: what factors can explain the collapse of the Weimar Parliamentary Republic and Hitler's coming to power? What factors explain this phenomenon? Individual responsibility?

The inter-war period was crucial in Germany against the backdrop of the Second World War, which followed closely.

Concerning the theory of democracy, Germany will introduce a first experiment after the First World War. There are a large number of concepts such as electoral systems, the role of institutions, parties and ideologies.

Describe the Republic of Weimar

What is the Weimar Republic?

The Weimar Republic is the name of the German political regime in place between 1919 and 1933. It follows the defeat of the First World War and the German Revolution of 1918-1919.

This revolution stems from numerous communist revolts and actions that led to the fall of the German Empire and the parliamentary "pseudo" monarchy. It started in the ports of Kiel with sailors' mutinies, which were followed by a generalised movement of the working class, which is showing solidarity with their dissatisfaction.

However, the working class is divided between the independent Social-Democracy with a socialist orientation that has leaders like Rosa Luxembourg and Karl Lübeck and the Social-Democracy that wants to introduce a parliamentary democracy.

The majority group of Friedrich Erbert (Social-Democracy) who is the last chancellor of the German Empire will form a pact with the military who will commit to maintaining and restoring security while protecting a new democratic government as long as it does not attack the privileges and status of the army.

A National Constituent Assembly meets in Weimar, Thuringia. The Constitution of the Weimar Republic adopted in July 1919 will be drafted. It was the birth of a parliamentary democratic regime that put an end to the German Empire and the German Revolution.

This democracy is governed by a president elected by direct universal suffrage, but it is the chancellor who is in charge of the executive, the latter being elected by the government.

This experience was marked by great political instability with twenty different governments between 1919 and 1933.

The appointment of Adolph Hitler by Hindenburg and the advent of the Third Reich regime were simultaneous and simultaneous, since the Nazis who came to power in 1933 would suspend fundamental freedoms and introduce an authoritarian regime. 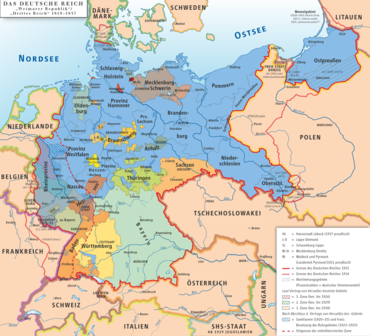 What is important is the date of 1870 when Germany unites. Previously, there was the kingdom of Prussia in the south. The date of 1871 corresponds to the annexassions of Alsace-Lorraine.

Before the First World War, the situation was similar. At the end of the First World War, following the Treaty of Versailles, which settled the economic reparations to be paid for, Germany was again cut off from its territory, namely part of Poland and Alsace-Lorraine. However, East Prussia is maintained in German territory.

How and what factors brought Hitler to power?

On the one hand, the transfer of power is done in a non-violent and democratic way, on the other hand, it will be demonstrated that the consolidation of power by the Nazis was extremely rapid from 1933 onwards; therefore the fall of the Weimar Republic and Hitler's rise coincided with January 1933 and the next few weeks that followed.

Transfer and consolidation of power

The "Weimar coalition" that will govern during the Weimar Republic is formed between the social-democratic party and the middle classes. It was based on a double pact: between the government and the military, then between industry and the working class, which consisted of protecting the economy through social partnership rather than class struggle. This will lead to a power struggle between the Conservatives and the Progressive Party.

A process will emerge from the progress of the democratic order. There is a beginning of this fragility following the end of an agreement between the capitalists and the workers in June 1933, then there will be employer offensives to abolish this social legislation during the period of the "Great Depression" from 1929 onwards. Moreover, the military will feel increasingly alienated and marginalized.

There is a general weakening of the partners of the "Weimar coalition" with a return of the Conservatives. Thus, these initial pacts gradually break down.

The dissolution of the Weimar Republic itself proceeded in stages and was initiated in the early 1930s with the appointment of Brüning by presidential decree. The appointment of Franz Von Papen and Herman Göring as Chancellor will be followed again. These are emergency measures taken by the president to set up a government.

In 1932, it is considered that there is no alternative to Hitler as a strong man to a new regime.

As for the transfer of power, President Hindenburg, who was leaning in favour of the authoritarian camp but was not prepared to suspend the constitution, will appoint Hitler on the assumption that he would keep his promise to continue governing with the parliamentary majority.

However, this was a profound and fatal error of judgment on the part of President Hindenburg. Thus Hitler and the Nazi party took power within the institutional framework.

The consolidation of power and the development of democratic governance.érive totalitaire se produisent rapidement. 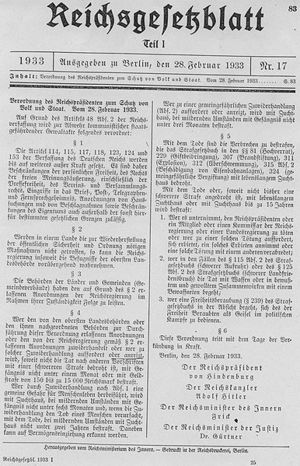 From 4 February 1933 onwards, censorship began to appear with the banning of socialist and communist newspapers. On 28 and 29 February, the Reichstag was officially set on fire by an "unemployed Dutch Communist". The following day, limits were imposed on individual freedoms, particularly with regard to the freedom of opinion approved by President Hindenburg, which would result in the arrest of Communist militants.

On March 5 instead of the national elections which will be the last elections of this new era in a climate of terror towards the left and generalised public insecurity. The Nazi party obtains 44% of the vote with the conservative forces which obtain 8% is allowing them to form a majority. As the Communists were arrested and banned, the Nazis obtained a 51% majority.

On 23 March, a law aimed at eradicating the misery of the people and the Reich suspends the constitution for four years and will concentrate power in Hitler's hands. Only the Socialists oppose this new law.

Within seven weeks, Hitler came to power by legal means and orchestrated the authoritarian drift of the political regime.

The seizure of power continued during the summers of 1933 and 1934. In 1934, the Nazi party became the only authorized party and in July 1934, when Hindenburg died, Hitler granted himself the power of chancellor and president, becoming the "führer".

The whole of society was then brought into line, the political regime changed fundamentally; it was no longer democracy, but the regime of the Third Reich that would later be characterized as a totalitarian regime.

Democratic potential of the Weimar Republic

A change in the distribution of party forces can have a direct and immediate impact on the nature of the political system involved.

During the period of the Weimar Republic, it is possible to count three main political concepts: 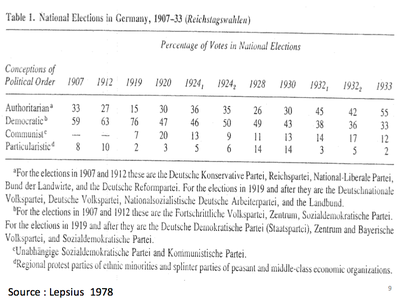 In short, there is a narrow and stagnant democratic potential and a great fragility of democratic institutions with many governments and coalitions forming and breaking down.

Explain the fall of the Weimar Republic 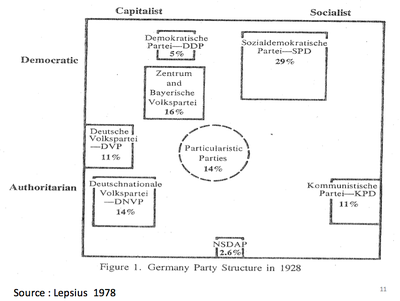 This graph is a representation of the different parties with two axes:

The percentages refer to the percentage of votes obtained by each of these parties in the national parliamentary elections of May 1928.

The first block is the conservative (left bottom) political formation which has its social base in the agrarian (junkers) and Protestant branch of the population in northern and eastern Germany as well as in the extreme east of the former Prussia with premodern authoritarian values.

The Liberal Group is made up of urban and agrarian Protestants from the rural world. It is divided into two currents: the liberal left-wing (DDP) and right-wing liberals (closer to an authoritarian conception of the political order)

The centre party, which federates the middle-class agrarian Catholic populations and industrial centres in the west and south of the country (Bavaria, Baden-Württemberg, North-Westphalia).

Social democracy mainly includes the workers of the secularized working class, which is strong in the large industrial urban centres.

Over time, this fragmentation became more pronounced with the splitting of the communists from 1919 onwards, with the nascent Nazi party and the social-democratic divergences. The Catholic camp will also be fragmented by an autonomous Bavarian branch (Bayerische Volkspartei), as well as divisions among the liberals and conservatives.

It should be recalled that the formation of this partisan structure takes place in the period 1870-1890, which reflects multiple and ancient social cleavages such as the cleavage between those who want a marked order between a state religion and secular tendencies. But also urban-rural divides (city - country) as well as regional divides such as Bavaria, which wants to have a party that has its own interests at the national level.

With the rapid industrialisation of Germany from the 1870s onwards, this cleavage was also the result of those who wanted to introduce more extensive social legislation to protect the worker.

These multiple social cleavages will structure this party system in such a way that the old cleavages cannot be pacified, creating multiple political forces until the end of the First World War.

The consequences are that it does not clearly emerge two political blocs opposed to each other.

However, two government coalitions will emerge during the period of the Weimar Republic with the Central Party. On the one hand, we have the democratic coalition (SD, left-wing liberals, Zentrum und bayerischeVolkspartei); on the other hand, the bourgeois coalition with the centre, the two liberal parties (left and right) and the conservatives. This lasted from 1919 to 1933.

In this situation, government coherence and stability were difficult to achieve. These two coalitions reigned respectively for 5 and 2 years on the whole of 14 years as long as the experience of the Weimar Republic lasted. During the other seven years, no coalition could be established, only with minority cabinet ministers in charge of government.

Between 1919 and 1933, there were 20 successive government coalitions, many of which were set up to resolve specific and important issues in a short-term perspective to resolve and respond to immediate crises.

This fragmentation generated political instability and, above all, weakened the political legitimacy of the "Weimar coalition". It mainly supported the Weimar Republic's project and will therefore be sanctioned for its failure through a protest vote.

To conclude, Lepsius can be quoted in the article From Fragmented Party Democracy to Government by Emergency Decree and National Socialist Takeover: Germany[1] published in 1978 summarizing this explanation, which states that "the crisis of the democratic regime was closely associated with the nature of the party system, its fragmentation". 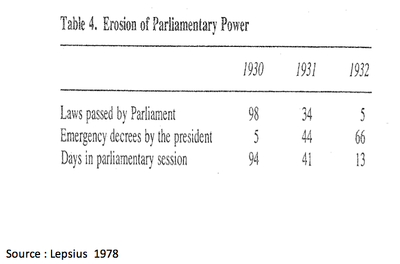 « ore voluntary associations attracted more members and did so in a more active fashion than ever before.Just as retailers, bakers, and commercial employees had organized into economic interest groups, so also did gymnasts, folklorists, singers and churchgoersgather into clubs, rally new members, schedule meetings, and plan a full assortment of conferences and tournaments » 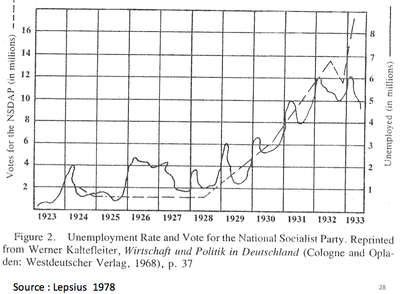 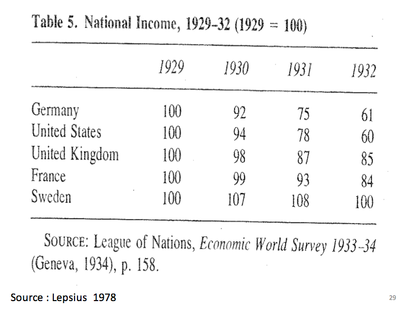 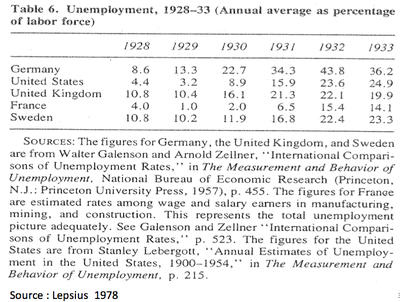