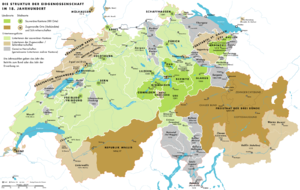 The Confederation of the 13th cantons and its allies in the 18th century.

Switzerland before 1798 is composed of the Thirteen Sovereign States and is surrounded by many allied territories including Geneva, Neuchâtel, the Valais and the Prince Abbot of St. Gallen. The allied and sovereign cantons have different regimes, as in Obwalden and Appenzell, where the people make the important decisions themselves. There are oligarchic regimes like Basel[7] and Fribourg, but also monarchical regimes such as in Neuchâtel or ecclesiastical monarchical regimes such as in Valais[8][9].

To settle inter-cantonal affairs, there is an annual conference called the Confederal Diet where each canton and its allies are gathered. Decisions are taken unanimously. The thirteen sovereign cantons and a number of allies are represented. This together forms the Swiss body and each canton enjoys independence from each other.

Despite social and religious conflicts, for five centuries these different sovereign states have remained united around four common denominators:

The consensus rule applies, decisions are taken unanimously because everyone benefits.

Until the 16th century, there were only 4 conflicts and 3 wars.

What kept the Swiss together?

There is no constitution, but a strong network of alliances links the cantons.

The centralized unitary state: the Swiss Republic from 1798 to 1803[modifier | modifier le wikicode] 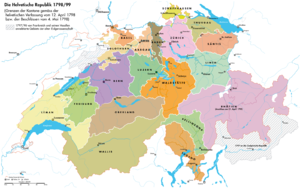 The 19 cantons of the Swiss Republic before February 1802. 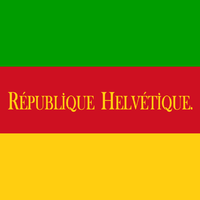 Flag of the Swiss Republic (French version, on the back).

The French Revolution, which, in the wake of the American Revolution, induces ideas of freedom and equality for individuals, will have a certain echo in Switzerland.

Thus, the principles of freedom and equality, which were excluded from political rights before 1798, will become an inalienable principle.

The French Republic will support the Swiss revolution and invade the territory making Switzerland a Swiss Republic created on the model of the French Republic. However, it has an economic interest. On the other hand, France, which has conquered Northern Italy, is very interested in the strategic position offered by the Swiss territory.

In 1798 the first Swiss constitution was promulgated, inspired by the 1795 constitution in France. The Swiss Republic is a centralized state. The system of cantonal sovereignty is abolished.

From now on, the central state is sovereign. The former territories under subjection are now on an equal footing. The individual is also emancipated, each adult individual is recognized for the exercise of his or her political rights and a political system with universal suffrage is founded. However, this Swiss Republic depends on France.

The Swiss Republic is plagued by many tensions between those who want to maintain this new order and those conservatives who want to return to the old model. In 1802, a civil war engulfed Switzerland for a return to the sovereignty of the cantons.

The civil war was interrupted by Bonaparte's intervention, which resulted in a return to a confederal state.

Napoleon brought to Paris a constituent assembly of all the Cantons, and drafted the Mediation Act of 1803 which restored the sovereignty of the cantons. However, the gains of the revolution are preserved by affirming the principles of equality and freedom. We are not going back to what was established before 1798.

The cantons that were sovereign remain so and some allied states become full-fledged cantons. This confederal state structure offers all citizens the right to vote and stand for election, but this remains a cantonal matter. 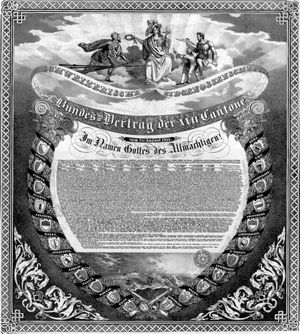 The complex network of alliances was replaced by the Federal Act of 1803, which strengthened the military field: Switzerland had to be able to defend itself against the Austrians in particular. The diet is restored in the form of a diplomatic conference composed of two representatives per canton.

Following Napoleon's fall, the Act was replaced by the Federal Pact of 1815 (very similar to the 1803 Act), which was intended to organize the confederation.

The progressives want a centralized state while the Conservatives want the confederal state structure to be maintained.

During the Sonderbund war, the conservative clan was defeated. Leading to the Federal Constitution of 1848. The federal state structure continues to this day, based on the 1815 Federal Pact. 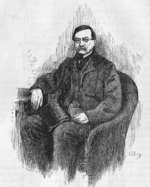 The federal state structure is a compromise. The progressives wanted a unitary state model inspired by France, with the abolition of cantonal sovereignty as a corollary.

The Conservatives are satisfied with the maintenance of the sovereignty of the cantons as set out in section 3 of the Constitution. 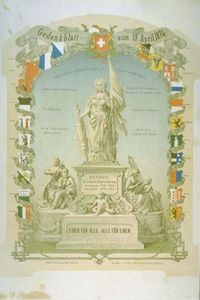