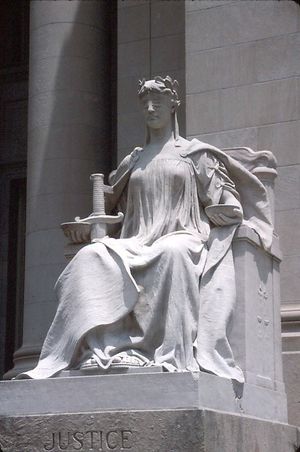 The law is the set of socially enacted and sanctioned rules of conduct that apply to members of society. The law is the set of rules that govern the relationship between men. Its function is to ensure the peaceful coexistence of the members of society within it. It is used to pacify relationships between individuals. Its purpose is also to organize society in order to protect the interests and property essential to living together. Law is the foundation of social order.

What is law?[modifier | modifier le wikicode]

Society is the gathering of men living in groups under common rules. The human being is constantly in contact with his fellow human beings, he will provoke an infinite number of relationships with others.

In any society, human beings are subject to constraints.

The social order includes an organization that ensures the cohesion of society. It must provide the community with the satisfaction of its essential needs and be achieved through a balance between opposing interests and the different currents that flow through it:

The multiple meanings of the word "Law"[modifier | modifier le wikicode]

The term " law " comes from the lower Latin directum, contrary to what is tortuous: it is what is in a straight line. The word "legal" refers to what belongs to the law (ius in Latin). It comes from the verb iubere which means "to order". The term iustus will give iusticia, namely "the just" and "justice".

The French Civil Code of 1804 was conceived according to the idea that after the revolution it was good to establish a civil law applicable to all and all regions of France. It governs relations between individuals and applies to all French people regardless of the region in which they live.

Article 1 proclaimed "There is a universal and immutable law that is the source of all positive laws, it is only natural reason inasmuch as it governs men". 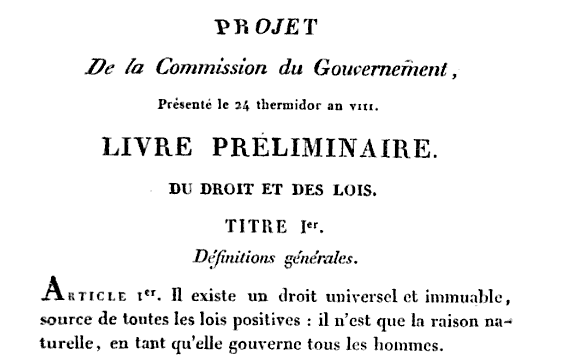 Even if this title has not been retained in the final version of the French Civil Code, it will still have an influence throughout Europe under French domination. When Geneva was the prefecture of the Department of Lake Geneva, the French Civil Code also applied to Geneva residents. As for the Jura, which had been annexed by France, it kept Napoleon's code under French domination and has always kept it since it was annexed to the canton of Berne.

For positivists, natural laws that are not recognized by a rule of positive law cannot influence the judge. Whether he is a lawyer, a consultant, a legislator or a lawyer: there is only positive law. Natural or moral laws are not mandatory unless they have been sanctioned by a rule of law. Therefore, these natural laws that are not incorporated into positive law cannot influence the judge.

Today, in the Constitution, there is a whole principle of freedom and equality. This was part of natural law 150 years ago and is now an integral part of positive law.

Particular attention must be paid to positive law/natural law.

The rule of law or legal rule is the rule of conduct in social, general, abstract and obligatory relations, the sanction of which is ensured by the public authority. The law is a set of rules of law.

The distinction between public and private law[modifier | modifier le wikicode]

Religious rules have no authority over the rules of law, but some rules have been incorporated into Swiss positive law (ex- you will not kill). Thus, they can become positive law.

The Elements of the Rule of Law[modifier | modifier le wikicode]

A set of legal rules forms a legal institution that aims to shape a fundamental social relationship. This is for example the case of marriage or adoption.

A factual situation is a conditional subordinate proposal indicating the conditions for the application of the rule; the factual situation of a judgment sets out the relevant facts (the parties involved, a chronological account of the facts leading to the dispute, the steps in the procedure and the parties' requests or submissions).

Example: "the one who intentionally killed".

The dispositive or supplementary or declaratory rules are those that apply in the absence of rules adopted by individuals. Only applicable if individuals have not decided to do otherwise.