Cumulative number of ACPr in force, 1950-2010, notified and non-notified, by country group. 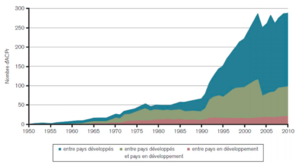 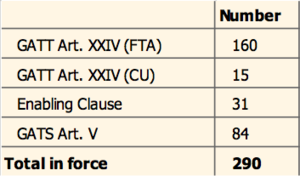 More than 350 agreements (goods and services) have been notified to the GATT/WTO by its members, and there are more than 290 of them in operation today.

If all the agreements planned and under negotiation are implemented, the number of regional agreements would easily reach 400. 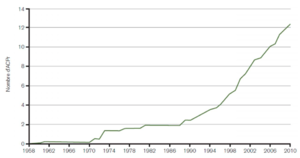 Participation in the rCPAs in force in 2010, notified and non-notified, by country 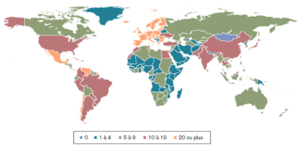 The "spaghetti bowl" of the Americas 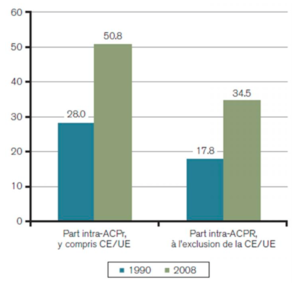 Thus, around 50% of world trade is discriminatory and does not respect one of the fundamental principles of the GATT-WTO (stipulated for example in Article I of the GATT): the MFN clause. It is however allowed as an exception through GATT Article XXIV and GATS Article 5 as long as the regional agreement: 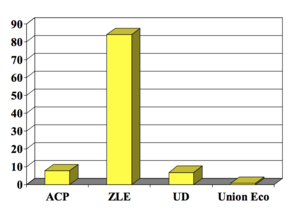 Share (%) of each form of integration in the world total.

Domestic production in A competes with imports from B and C. 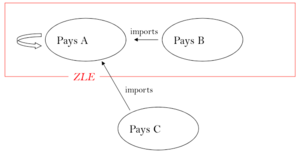 Creation if the establishment of the FTA leads to the replacement of domestic production in A by more efficient (lower cost of production) production from a partner country B.

Diversion if the establishment of the FTA induces the replacement of imports from C (low-cost production) by imports less efficient (at a higher cost) from a partner country B.

=>UD has the effect of creating business

=>UD has the effect of trade diversion

on all its imports. =>Imports only from

) Setting up a DU with 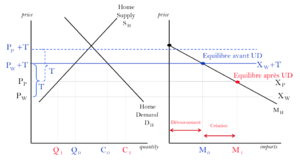 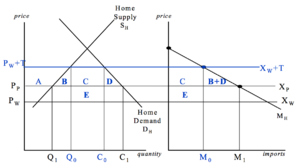 The wellness effects of TU on

Difficult to say a priori if the sum is positive.

A TU is all the more likely to increase the welfare of the importing country if all other things are equal:

Difficulty: to construct a hypothetical fashion, an anti-world, to show how the trade of member countries would have developed in the absence of the union; the difference between the development of "hypothetical" and real trade is attributed to the effects of the union. 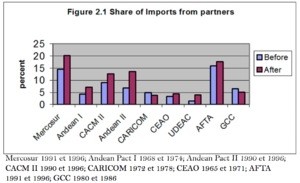 Econometric method based on the Gravity Model[modifier | modifier le wikicode]

Severity model = explains trade flows between countries (bilateral trade flows) by its structural determinants, GDP of the two countries and distance between them.

: total bilateral imports from the country

: GDP of the country

According to Viner, following the establishment of a PCA, creations (CT) and trade diversions (TD) are reflected in trade flows at the Union level as follows:

The ex-post evaluation of the effects of a PCA on the volume of trade includes the following variables (coefficients in brackets) : 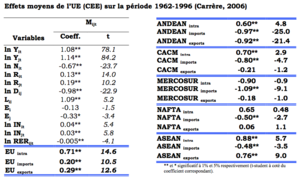 These studies find modest traditional gains in % of GDP; and today the ACP will be less important in terms of relative preferences and market access. 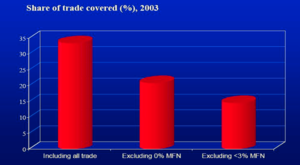 Preferential trade by importer, 2008, shares based on margin of preference and MFN rates (percentage) 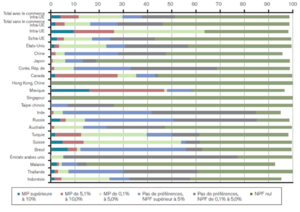 The expected gains are therefore more at the level of : 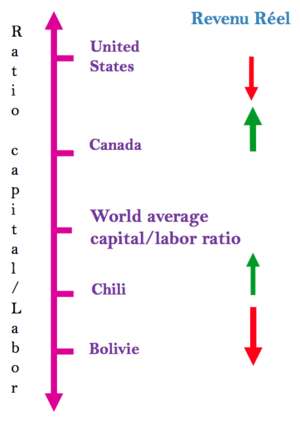 N-N: Canada is between the US and RoW. This generates WD for the US => convergence

N-S: Canada and Chile are on either side of the global average staffing ratio. Can go either way depending on the distance between these countries and the world average. Other effects are expected from these agreements.

S-S: Chile is between Bolivia and RoW. Bolivia (less developed) suffers from DT=>divergence

The theory of comparative advantage is not the only force explaining reallocations of economic activity between countries. Agglomeration forces add up = a combination of economies of scale and trade costs.

"New Geographic Economy" study these different forces of agglomeration and dispersion which operate simultaneously and which determine the geographic distribution, at equilibrium (for a given level of costs to trade) of economic activity.

How does regional integration affect the geographical location of equilibrium of economic activity? Implementation of a Regional Integration agreement lowers costs to trade. result of "centre-periphery" (see chapter 4).

(this is also the case upon accession to the WTO).

Enlargement of the market

("tariff-jumping" IDE). This is especially true for investments from countries outside the agreement.

Effects in the presence of asymmetric information[modifier | modifier le wikicode]

But why are these non traditional gains to be observed at the regional level rather than at the multilateral level? Size effect; easier to monitor. Are these non-traditional gains more likely to be important for smaller members of RIA, and for South countries signing agreements with North countries? In principle yes, but:

A large and growing share of international trade takes place within regional agreements and not under the MFN clause (exceptions granted by Article XXIV of GATT, Article 5 of GATS + exceptions to these articles in the enabling clause or "enabling clause" in the case of partial tariff preferences granted to developing countries or LDCs).

Preferential trade liberalization within an FTA is not necessarily beneficial to its members. It will depend on whether the agreement creates more trade creation than trade diversion.

In a world with asymmetric information there may be significant gains from signing a regional agreement with larger or developed countries.

Most of these gains are not present for regional agreements between small developing countries.

The problem of North-South agreements are the other reforms that can be imposed on developing countries by the DCs and which go against their development objectives (e.g., intellectual property agreements in Chile-US for example).