The study of participation goes back to the rise of behaviorism. At first, researchers were interested in explaining participation in a given country, and only later did they begin to develop comparative studies that have the advantage of focusing on the role of context. Initially, participation was conceived only in terms of voter turnout and everything else was put into another category. Then we moved to bivariate analyses that put two or one explanatory factor in relation to what we are trying to explain; and today, we are interested in many more factors, particularly because of more sophisticated analysis methods with multi-level analysis among others.

Milbrath is one of the founders of American sociology on political participation, showing that there were several forms of participation. In a 1965 book, he postulates a distinction between three types of political actors also called "citizens" who are apathetic actors (1) who do not participate and are completely absent, spectators (2) who are people marginally involved in politics participating from time to time, and gladiators (3) who are people who are active fighters and participate all the time.

On the other hand, Milbrath based himself on studies by Verba. Milbrath distinguishes six different types of citizens, voters and patriots (1), contact specialists (2), communicators (3), party and campaign workers (4), community activists (5), protestors (6).

A third essential typology is that of Barnes and Kaase. They were the first to think in terms of typology in order to highlight the main types of participation. There is the idea of a true typology of forms of participation: inactive (1), conformists (2), reformists (3), activists (4), protestors (5).

Typology of the repertoire of political action: Barnes and Kaase[modifier | modifier le wikicode] 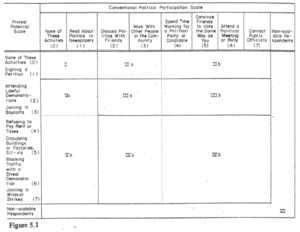 The interest with this table is to see how participation varies and to show that engagement is highly dependent on the political context in which it takes place. 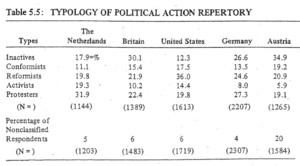 Teorell, Tocal and Montero distinguish several forms of political participation, namely voting (1), consumer participation (2), party activity (3), protest activity (4) and contacting (5). These five forms depend on three criteria: channel of expression (1) which is extra-representative (2), exit-based (3) and voice-based (4). A further distinction is made between targeted (1) and non-targeted (2).

This typology has been empirically tested, but how was it arrived at on the basis of empirical data? 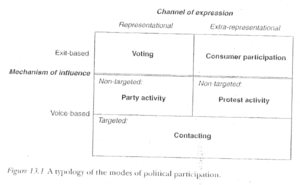 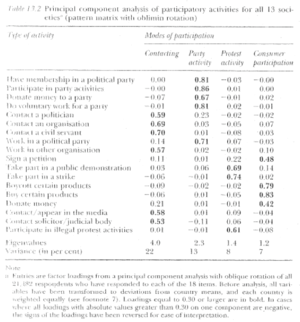 A fairly standard battery of participation appears. The idea of factor analysis starts from the idea that there are certain latent dimensions of human action that cannot be observed. We observe something else and through this we try to identify and understand the latent dimensions. A factorial analysis will allow us to reduce a great complexity and to identify some underlying and latent dimensions. We observe correlations between the observed item and the latent unobserved dimension. The logic is to try to define and observe participations through inferences.

In the literature, there are several proposals, but in the end, it is possible to reach a consensus that defines up to five main forms of participation.

It is already possible to distinguish between four main types of explanatory factors that must be taken into account.

First, we need to look at what Milbrath called the immediate environment, i.e., contextual factors directly or closely related to the explanations of participation, such as the role of the media, the potential effect of political campaigns, but also the role of personal contacts and informal conversations that influence us that can inform, convince or deter.

A third set of factors is related to social position, which is socio-economic status, age, but also gender. There are variations between these different socio-demographic characteristics and participation.

Finally, to return to the contextual level, there is the broader environment, namely the social system, cultural tradition or the institutional framework and political system, which may explain different participation rates from one context to another.

To sum up, two levels need to be taken into account, namely the macro level, which is a contextual level, and the macrosociological level. A comprehensive explanation takes into account these four types of factors. Nevertheless, this is a simple list of factors to try to explain why people participate in politics. These factors potentially have an effect.

This theory is the first chronologically in the history of the discipline, namely the theory of socio-economic status. This theory focuses on a certain type of factors, namely the level of education, which is the variable that has the most explanatory power of participation in general whether electoral or non-electoral, there is also income and occupation. Behind this theory there is a concern about the role of social class. This theory has been dominant for many years.

This theory is rarely found in textbooks. It is Professor Giugni who makes the distinction, because it can be integrated elsewhere.

The resource model is a dominant model that is still dominant today and comes from Verba for example. This theory focuses on the resources that individuals have in politics. The idea is that to be able to participate politically, you have to have certain resources. According to a broad definition, this can be any kind of resources, including cultural resources that come from education. Resources are defined as time to devote to political participation, money that refers to the income factor, and civic skills. Behind this model is the idea that skills come from somewhere and highlights the fact that engagement in various non-political and therefore civic associations gives us those skills that are useful for political participation later on.

Social capital is defined by its properties and resources, i.e., the social relationships and networks that give rise to generalized trust, as Putnam calls it, which translates into institutional trust. Putnam also emphasizes the idea of norms of reciprocity that are established between a social system and an individual.

This theory has been used mainly to explain the participation of certain minority groups, particularly in the study of immigrant participation. Nevertheless, this theory is less widespread, but it is a model that has begun to spread.

This model is less widely used to explain, among other things, the participation of certain minorities in the United States in the context of ethical and racial cleavages. The basic idea is that there are a number of factors, including four main actors that explain why people participate:

The combination of these four factors means that members of a minority should participate in forms of collective action. The first major theory to explain the emergence of social movements focuses on grievances, which are claims also related to situations of injustice between groups.

When we look at voter turnout, there are three main families of explanatory factors.

Another set of factors is at another level, namely the characteristics of the election or vote, including the number of parties and candidates in the running, the importance of the issue at stake, the balance of forces at play, and the degree of competition between parties and candidates.

Finally, there are the characteristics of the electorate with the social position and the perception of politics.

To summarize, the explanation of voter turnout involves factors that are at the macro level of the political system and process as a whole, specific characteristics of the election or vote being studied that can explain variations from one relationship to another, and finally the characteristics of the electorate that can explain variations between individuals or between one group of individuals and another. All of these factors must be taken into account in order to have a comprehensive explanation of voter turnout.

According to Franklin, there are three main theories of political participation, namely the resources (1) which are time, money and knowledge, the mobilization theories (2) which focus on the role of individuals and the awareness of the political role of individuals can be due to different sources including the role of the media. In other words, there are organizational bodies that mobilize people to vote. Finally, there is instrumental motivation (3).

At the time Franklin was writing, there were two major theories, namely resource theory and mobilization theory. For Franklin, it was also necessary to look at instrumental motivation, which is the meaning that individuals can have in relation to the impact of their actions on the outcome of the election. It is the sense of the effectiveness of one's own participation.

The reason why instrumental motivation has to be taken into account is that resource theory, but also mobilization theory, cannot explain a fact that is obvious, namely that the rate of participation at the aggregate level varies greatly from one context to another. To explain this variation, we must look at the instrumental variation, which is the motivation people have to participate for instrumental reasons, i.e. the fact of participating is explained by the perception of the effectiveness of participation. This instrumental motivation is strongly influenced by the context and factors such as the fact that electoral systems, the number of parties involved, the salience of an election, the balance of forces at play are what motivate citizens to participate. 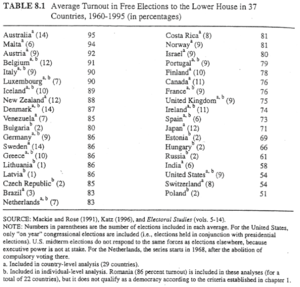 This table is the average voter turnout in free elections cumulated between 1960 and 1995. Enormous variations appear with, for example, Australia with 95% and Poland with almost 51%. Immediately after appears Switzerland in this negative ranking.

There is a huge difference from one country to another. For Franklin, this cannot be explained by the resource model because it is assumed that in all countries, on average, there should not be a composition effect from one electorate to another that could explain this big difference. The same is true for the theory of mobilization, the media plays a big role, all political parties run political campaigns, there are groups that mobilize, there is a set of homogeneity that cannot explain the differences. 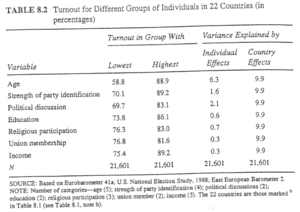 Franklin wanted to show the average rate of voter turnout in the lower versus the higher category of the variable in question.

We see measures of both individual and contextual effects. Franklin concludes that the context effect is more important than individual differences. 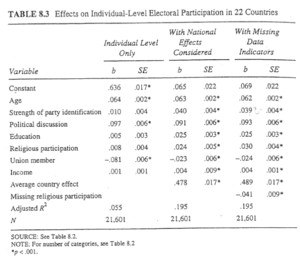 Individual characteristics play an important role, but the context effect is particularly important. 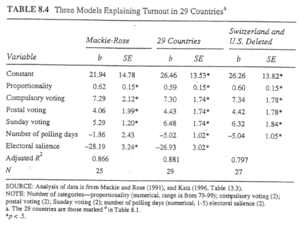 In this table, Franklin emphasizes context effects. Looking at the first model, Franklin tries to see what characteristics of the institutional context can influence participation. We can see a significant, but relatively small effect of .62. In other words, it increases participation by 0.62% if you are in a proportional system rather than a majority system.

With compulsory voting, as there is in some places also in Switzerland, the effect is still significant, but still important. If you are obliged to vote, it increases voter turnout by 7%.

A third characteristic is the voting day or days, which is the only effect that is not significant and is even negative, namely that the more time people are given to vote, the less they will vote.

The salience of an election, which is the contextual factor Franklin wants to emphasize, has a significant effect. The more salient an election is, the more likely people are to participate.

Voter turnout varies greatly from one context to another and also over time. Much work tries to show that there is a fairly steady decline in voter turnout. This table shows two lines, namely all the countries included in the analysis, and a second line showing democracies. Participation is probably overestimated for different periods. We see a decline ranging from 79% to 71% for all countries and a decline ranging from 83% to 73% for democracies. What we see is that the real point of decline is from the 1990s onwards.