There are several definitions as for every concept in social sciences. Sometimes there is some consensus around a widely shared definition while for other concepts there is much less consensus and competition between different definitions. For electoral behaviour, there is a relatively broad consensus. On the other hand, for non-electoral behaviour, there is less consensus. These are two areas that have hardly ever spoken to each other. Attempts are being made to define the concepts that would apply to both areas.

With regard to the concept of political behaviour, there is a broad definition, which is that political behaviour is all activities aimed at influencing the distribution of resources and power within a society. This includes aspects other than actions such as opinions, attitudes or beliefs.

Milbrath proposes as a definition to characterize political participation which is "actions by private citizens through which they try to influence or support government and politics".[8] There is both a notion of trying to have an effect on political elites, but there are also supporting activities.

Other authors such as Verba exclude supportive activities while others exclude non-conventional participation. Others focus on the relational aspect with interactions between political authorities and citizens such as Barnes and Kaase.[9]

It is a participation that takes place in the context of elections, including free and competitive elections. This notion takes on meaning in democratic contexts. Voting behaviour is behaviour that is regulated and institutionalized by the state being more punctual and occurring at predefined times.

In Switzerland, an important distinction must be made between voting and election. We will see, when we analyse the factors explaining these behaviours, that the factors are not always used to explain both types of behaviour. 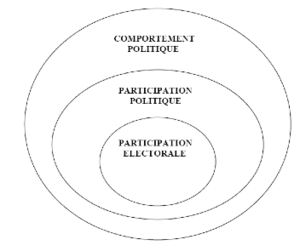 In Dynamics of Contention published in 2003, McAdam, Tarrow and Tilly define protest politics as a collective, episodic and public interaction between claimants and their objects.[10] These authors have introduced other dimensions, namely that at least one government is involved in the claims as an author, object or party. If realized, the claims affect the interests of at least one of the claimants. We speak of collective action to the extent that if carried out, the collective action affects the interests of certain actors, not only the authors of the claims, but also the objects of the claims. For example, these are social movements, revolts, rebellions, terrorism, civil war or revolutions.

There is not really a consensus in the scientific literature. There is a substantialist definition which is that social movements are disadvantaged groups, i.e. groups that do not have access to institutional channels and mobilize to defend common interests through unconventional actions. A relational definition defines social movements as challenges to authorities based on common goals and shared social solidarities. 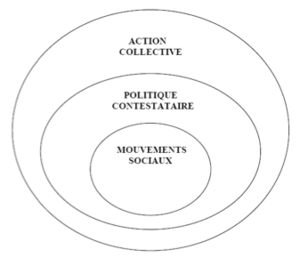 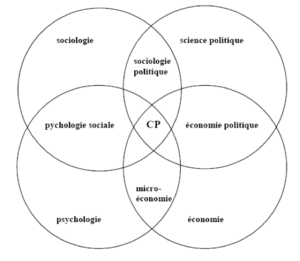 Political behaviour can be studied from different angles. There can be different approaches, including normative and prescriptive approaches to what constitutes good political behaviour. There have been theorists who have moved in this direction. The idea is to try to identify the explanatory factors that explain and understand why citizens engage in politics or do not engage, or engage in certain types of political behaviour. Beforehand, a number of conceptual milestones need to be established with the different theories, whether electoral or non-electoral.

Any answer in social sciences and science is an interim answer:

What we want to identify and explain is political behaviour in its different forms and this or these political behaviours are influenced by three types of factors based at different levels. Both the structural context and the cultural context play an important role at the macro level. At the meso level are the dynamic social networks of groups and ultimately the choices and preferences of individuals. The idea is that there is an interweaving of these factors. If we take these factors and deal with them all at the individual level, it structures the course because we are going to look first at the notion of cleavage and its different translation influencing political behaviour.