What is the link between the balance of payments and the foreign exchange market?

What is the exchange rate of a currency and what are its main sources of fluctuation?

Who are the main players in the foreign exchange market?

What is the forward exchange rate?

What is the role of expectations in the foreign exchange market?

What is the relationship between the interest rate and the exchange rate?

Is the foreign exchange market efficient?

) to simplify the analysis, the balance of payments equilibrium is written as follows:

Both CC and CF depend on the exchange rate,

= price of one currency in terms of another currency.

Within CF, it is useful to distinguish between private transactions,

, and the reserve assets, RES, the latter being assumed to be independent of

Two approaches to the determination of the equilibrium exchange rate related to two different historical situations :

is exogenous = capital flows are free, and react much faster than real (fixed short-term) transactions.

is determined by the capital transactions balance of stocks. Historically, integrated financial markets since the 1970s => 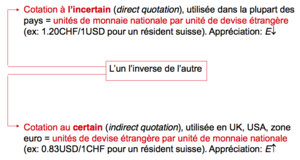 Concretely, in the following, given the rating and quotation conventions adopted, 1.26 CHF/USD means that 1.26 Swiss francs are needed for 1 US dollar and that the Swiss franc is the national currency (=> if the rate were to rise to 1.33 this would indicate a depreciation of the CHF).

A depreciation of the national currency (CHF) reduces the relative price of the exported goods (watches in the example opposite). See also Box 13.1 of the KO on overnight stays of US tourists in Paris and the EUR/USD rate.

Main players in the asset market: Commercial banks (main player: the 10 largest banks account for 75% of the market) and the interbank market ('wholesale' market); commercial companies (operating in several countries); non-bank financial institutions, e.g. pension funds (since the deregulation of financial markets); central banks (small volume of transactions when they are involved but high impact because of the signal effect).

Amounts: Trading volume around $1500 billion per day. In 6 days one exceeds world trade by one year!

Characteristics: Exchange of currencies on many financial markets, with few opportunities for effective arbitrage because information circulates very quickly. The USD is still the dominant vehicle currency as most transactions are still between one currency and the USD.

for spot exchange rate). The validation day of a cash transaction =

(2 days after the conclusion of the transaction).

When transactions specify a release date with

A foreign exchange swap or currency swap is a spot sale of a currency combined with a forward purchase of the same currency.

Arbitrage ensures that there are no major differences between, for example, 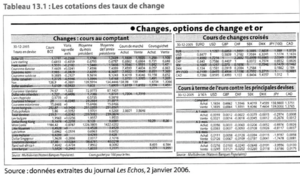 Quotation to the certain of the euro.

The ECB rate is the reference exchange rate set by the European Central Bank.

The over-the-counter rate is always less favourable than the interbank market rate.

The spread between the ask price and the ask price is the profit margin for commercial banks (transaction cost) and is generally higher for the rarer currencies.

As a result of arbitrage, the direct exchange rates are equivalent to the product of the cross-exchange rates (example: CHF/USD = CHF/EUR ∙ EUR/USD).

Forward transactions are used by economic agents to hedge against the risk of unexpected exchange rate fluctuations. Example of KO players p. 361: a player sold in France for 100 euros and paid 9,000 yen to the Japanese supplier. Compare the gain per player sold in the case of i. immediate payment at the spot exchange rate YEN/EUR = 95.25, ii. future payment at a future spot exchange rate YEN/EUR = 86.95 (yen appreciation), iii. future payment covered by a yen purchase at the forward rate (YEN/EUR) = 93.46].

Spot and forward exchange rates are closely related (especially as the term approaches). 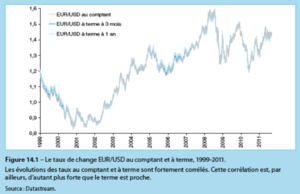 Currency forwards, futures and options are derivatives, which have grown considerably since the 1970s.

The forward purchase of a currency on the futures market is binding. Once the terms of the contract (amount, maturity) have been agreed, there is no going back even if expectations change. See example on the next page.

In the case of currency forwards (futures), the promise to deliver a given amount of a currency at an agreed term is purchased, and this promise can be resold (realizing a gain or loss in the futures market) at any time. More flexible than the forward, even if the terms of the futures contracts are standardized (= not possible to negotiate the amounts or maturity as in the case of forwards).

Typical case where the financial market develops a new instrument to circumvent a (probably transitory) difficulty → creation of a CNY vs. USD forwards market.

A currency option gives the right to buy or sell a specific amount of a currency at a fixed price at any time until the expiration of the specified maturity date (the other party -- seller of the option -- must sell or buy at the discretion of the owner, who in turn has no obligation to actually exercise his right).

Example: You will receive a foreign currency payment on an uncertain date in the next month. To eliminate any risk (of the foreign currency depreciating), you buy a put option that allows you to sell the currency at the fixed rate at any time during the month. In case you need to make a payment you buy a call option.

Quotation convention: In the following we will always use the uncertainty quotation (= KO) -> we will always put the national currency in the numerator.

The foreign exchange market is in equilibrium when all assets denominated in all currencies offer the same expected rate of return (non-arbitrage).

, the exchange rate, reflects the price of a (foreign) asset. Asset = transfer of purchasing power in the future. Its current price depends on the anticipation of its future price.

-> anticipated appreciation of the USD.

Is it necessary to invest in CHF or in foreign currencies? Capital

Wealth is held in various forms of assets and transfers purchasing power in the future the desirability of an asset will depend on its rate of return, but the rate of return is rarely known (e.g. the dividend associated with a share might be known, but the value of the security changes over time).

Other things being equal (which is rarely the case), investors prefer to hold assets with a higher expected real rate of return.

Two other criteria influence the choice of an asset:

Interest rates on different currencies are usually different because they depend on national conditions. On the other hand, when two countries adopt the same currency, such as France and Germany in 1999, interest rates converge and then equalise. (... Is this still true today?) 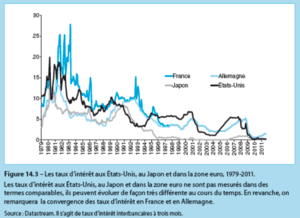 Hp: the expected return is the only criterion (risk and liquidity are not taken into account).

is the anticipated depreciation rate of the CHF.

are low enough, their product can be neglected (e.g:

The expected return on the USD then becomes, approximately :

. If a depreciation (appreciation) of the national currency is anticipated in the future, this means that when the USD is converted into CHF (at the end of the investment period), a foreign exchange gain (loss) is expected.

How is it evolving

is low ceteris paribus, the more the

is high. Intuition: the cheaper the currency, the higher the expected return on that currency, all other things being equal. 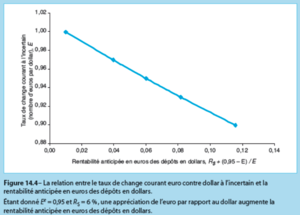 depreciate (appreciation of EUR), the rate of anticipated depreciation increases as well as the

. All other things being equal, an appreciation of the national currency (here CHF) increases the AR of a foreign currency investment (here USD).

The curve describes the evolution of

as a function of 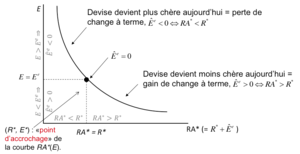 -> in this case: displacement of the whole curve (idem if

Balance in the foreign exchange market:

) and face the same interest rates

exogenous. In the event of an imbalance in the foreign exchange market, it is the spot exchange rate, E, that adjusts.

Equilibrium for the investor corresponds to a situation of "non-arbitrage" when:

), which corresponds to the equilibrium of the foreign exchange market (

, the only value of

that satisfies the condition

is the one that lies vertical to

. Any other value of

and a return to the curve

) that satisfy the condition of no shading (=

An increase in the domestic interest rate makes domestic assets more attractive, leading to excess demand for the domestic currency (=

) => appreciation of the domestic currency ( 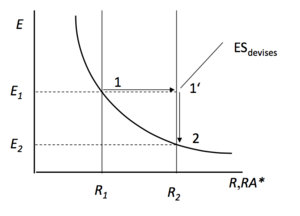 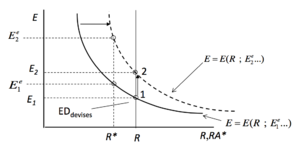 Determines the value of E that satisfies the non-arbitration condition. All points along the curve are equilibrium points.

But: on what depends

The model based on the unhedged interest rate parity represents a first step in determining the exchange rate. We now have to complete it by developing a theory of interest rate formation and expectations.

in our rating (Source: Feenstra-Taylor).

is particularly interesting for forecasting purposes. Under the assumption of perfect expectations (

could be used as a prediction of

Basic idea: if the assumptions underlying the

(in particular risk neutrality) are correct and the agents are rational (ie. use all available information and do not make systematic errors), the effective depreciation rate of the national currency, <should be equal to the expected rate of depreciation

is a prediction error of null mathematical expectation.

However, in reality the

How to interpret this? => foreign exchange market not efficient? If there is a systematic bias in forecasts -> test of market "efficiency", an efficient market is defined as a market where participants are risk neutral and form their expectations in a rational manner [they take into account all the information available to them rather than basing their predictions solely on the past (adaptive expectations)].

If markets are efficient, at any point in time the prices of currencies, or equities, are correctly valued (no over- or underestimation) and price movements will follow a random path.

Econometric tests have shown that markets are not efficient in this sense.

Risk premium: in this case the forecast bias would come from omitted variables that are to be modeled.

It is likely that the role of "news" (unanticipated events) is a major cause of changes in exchange rate values.

Participants could make systematic errors despite their rationality and learn about market behaviour through a learning process (adaptive expectations) based on the past → unrealistic expectations of future prices (at the origin of the real estate bubble and the last financial crisis).

The financial account approach focuses on the BOP FC as a determinant of the exchange rate (particularly relevant from the 1970s onwards with the gradual liberalisation of the capital market and the growing importance of transaction volumes in the asset market).

The expected rate of return on a foreign currency investment depends on the foreign interest rate and expectations of foreign exchange gains (or losses).