Bezes distinguishes the "political roles" of the administration. Public administration can influence not only the content of public policies, but also when decisions are made and put on the agenda ("framing") and thus ensure that a political decision has to be taken. Public policy can have a very strong influence on decision-making (expertise, asymmetry of information). Bezes also distinguishes between the intermediation power of interests ("capture") and public policy networks, but also the implemented power ("implementation deficits") and the resources of action (and resistance).

There are three components of an interest group:

In The Interest Groups 2006, Grossman and Saurugger distinguish action directories from interest groups. Action directories are the means (or strategies) that interest groups use to advance or defend their interests. They presuppose the mobilization of different resources (financial, cognitive, organizational, legal, temporal, etc.). These resources can be applied to different action directories. Rather, resources are intended to act from within, in particular the first two categories where public authorities have to negotiate with the powers of interest in order to take decisions, there is consultation with interest groups, and the other categories are aimed at putting pressure on decision-makers:

On the one hand, there is an internal strategy with a privileged relationship with the government and public administration and an attempt is made to influence interest. On the other hand, there are external strategies. Interest groups have a number of strategic resources.

For Grossman and Saurugger these strategies can be:

David B. Truman in The Governmental Process, published in 1951, interprets interest groups as the organization of conscious citizens who, by advocating their claims, contribute to informing decision makers and, in so doing, to improving the quality of legislation.

According to Schmitter, in Still the century of corporatism? published in 1979, the pluralistic model is a "system of interest representation in which constituent units are organized into a non-specific number of multiple, voluntary, competing categories, which are not hierarchically organised and self-determined (as regards the type or nature of interests), which are not specifically authorised or recognised, subsidised, created by the State and which do not exercise a monopoly of the activity within their respective categories ". In this model, access to the political decision-making process must be open to all interest groups, there is no need for conditions of representativeness to be associated with the political process, which means that there is no favouritism on the part of the State towards a particular interest group, It will integrate all the interest groups, on the other hand, there is no hierarchy in the interest groups and no interest group has a monopoly on a given topic, all the interest groups are called upon to give their point of view. The ideal at the heart of this pluralistic model is an ideal of competition between points of view and this democratic discussion between all points of view and interest groups will lead to the best possible decision. There is no risk of capture and no privileges. Peters in The politics of bureaucracy published in 2001 speaks of pluralistic ideals, namely "self-regulating universe of pressure groups formulating public policy" as a condition of the public interest statement to the opposition of the notion of capture that subverts public policy into private policy, the critics have focused on two postulates:

For Lowi, in American Business, Public Policy, Case-Studies, and Political Theory, published in 1964, the pluralistic model is effectively limited, as there is the appearance of the "iron triangle" in the political decision-making process between certain interest groups, government agencies and congressional commissions. All three types of actors had a specific vision of what politics was by monopolizing the decision. In The Theory of Economic Regulation published in 1971, Stigler shows that government agencies have been captured from government administration and public policy by certain interest groups.

In Liberal corporatism and party government published in 1982, Lehmbruch and Schmitter developed a model opposed to the pluralistic model, which is the neo-corporatist model based on mutual recognition and developed exchanges between the state and certain interest groups. Access is not given to everyone and is limited. The conditions of representativeness and expertise are important for the selection and selection of the relevant interest group. The conditions of representativeness and expertise are important and not all interest groups cover these conditions, so we will integrate the most relevant interest groups. It is a model that is justified by privileged collaboration, but it is because they are more representative and because they have more expertise. There is a hierarchy of actors with more powerful interest groups than others, so that some interest groups may have a monopoly on a given issue. Political power recognises that a particular interest group has a monopoly on a particular issue. There is no open and democratic discussion, but a much more framed discussion and a much more closed circle to try to find solutions between actors who knew each other. It is not a denial of democracy, but to recognize the superiority of certain groups by virtue of criteria that have legitimacy.

In Schmitter's view, neo-corporatism is a "system of representation of interests in which constituent units are organized into a limited number of unique, mandatory, non-competitive, hierarchically organized and functionally differentiated categories, recognized or authorized (if not created) by the State which deliberately grants them a monopoly of representation within their respective categories". In Corporate lobbying in the European Union: towards a theory of access published in 2002, Bouwen proposes a current re-reading through the analytical grid of "exchange relationships" between government-guaranteed access to decision-making processes and expertise and representativeness/legitimacy ensured by interest groups. Not all interest groups are equal and it is normal to give more weight to those with more expertise and representativeness.

Mancur Olson in The logic of collective action. Public goods and the theory of groups published in 1966 shows that interest and mobilization for public affairs is not self-evident. For Oslon, the larger a latent group is (and defends general and long-term interests), the less likely it is to succeed in organizing itself to promote the common interests of its members. The individual contribution to the group's success seems marginal, the individual reward to be expected from the group is reduced, the total organizational costs are high, although the average or marginal costs decrease due to economies of scale.

In most cases, the concessions where the benefits that will be obtained will be available to all workers, but not just to the unions. This is the paradox of collective action: no one will participate in a collective action in which everyone would have an interest in everyone participating (free riding or stowaway phenomenon) unless the group provides "selective incentives" including negative ones, such as the lack of legal protection for workers not affiliated to a trade union. There would not be any spontaneous interest in participating in public affairs and therefore we must create the conditions for this interest. Olson campaigns for selective incentives. The question is how to mobilize people to serve a cause if this interest in public affairs is not spontaneous. There is a pluralistic ideal and there are facts that show that this ideal is hard to implement.

Different criteria must be taken into account, such as the links between types of democratic regimes, types of public policies, emergence and types of interest groups, mobilised action directories, nature of the relations between interest groups and public administration in particular?

In Les groupes d' intérêt sous la Ve République published in 1983, Wilson attempts to make a proposed synthesis to propose a typology that will be refined by Offerlé in Sociologie des groupes d' intérêt published in 1994. Wilson and Offerlé distinguish three models: the pluralistic model, the neo-corporatist model and the protestor model. The first three categories are the most developed. 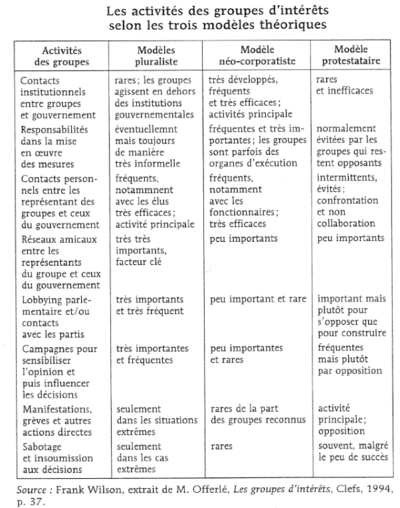 Marsh and Rhodes propose to analyse the intermediation of interests between civil society (interest groups) and political power (administration) through the concept of "policy networks". It is not a totalizing vision, but an empirical tool. The idea is the disaggregation of actors (e. g. individual administrative services), their interests, resources, action directories, powers. Depending on the empirical cases to be analysed, the situations will be totally different. This model aims to empirically analyze the relationships between interest groups and public decision making.

For Atkinson and Coleman in Strong States and Weak States: Sectoral. Policy Networks in Advanced Capitalist Economies published in 1986,"Political networks can take variable forms and for this reason, their study requires a more nuanced categorization than the differentiation between weak or strong states or between pluralistic formulas and corporatists.

Marsh and Rhodes establish a fine typology of policy networks according to three criteria:

Forms of networks (continuum) (according to Rhodes and Marsh, 1995:44)[modifier | modifier le wikicode] 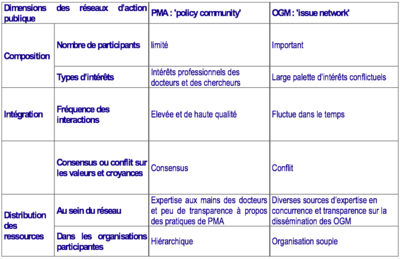